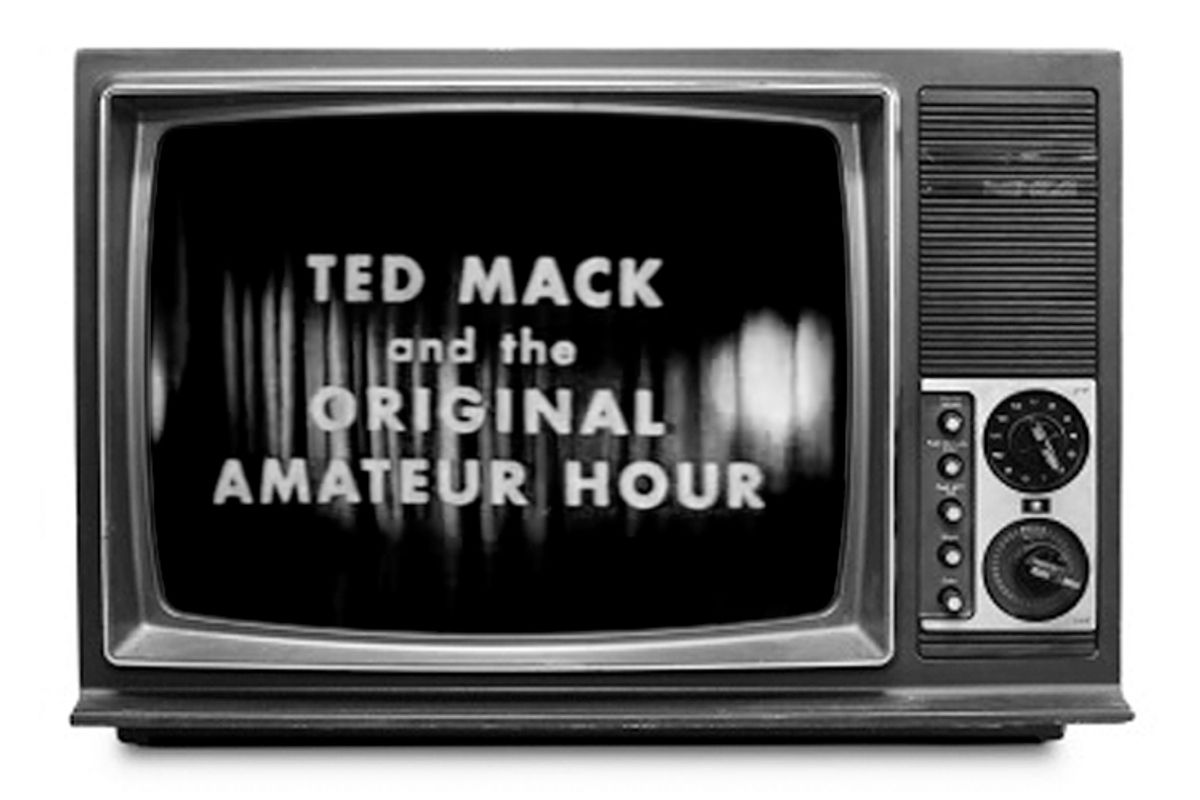 When I was a kid, back in the '50s, TV sets were heavy, unwieldy boxes with enormous rear ends that held an assortment of tubes. There was no such thing as remote control. We switched channels by turning a knob. Often the knob would break off, and you’d have to use pliers.

In those days, TV sets featured fuzzy black-and-white images and, not infrequently, something we used to call "snow," a term that decribed the screen’s appearance when the reception was poor -- which was most of the time. We used rabbit ears to improve the reception, which meant that one of us had to watch while standing on a sofa.

My usual mode of watching TV was to sit on the floor, clad in a cowboy hat and holster, consuming milk and cookies.

The show began on radio and ran from 1934 to 1952. Ted Mack had started in show business as a dance band clarinetist and later as a talent scout for the radio version of the show. The TV version -- with Ted as the host -- debuted in 1948. This is what I remember about it:

The show’s main sponsor was a product called Geritol, a high-potency vitamin drink -- usually meant for elderly people -- which was probably snake oil.

After the announcer introduced the show, you’d see Ted -- an ordinary guy in an ordinary suit and tie, conservative haircut -- as he stood at a podium in front of a dull gray curtain, speaking into a visible microphone. Beside him, on the podium, was a bottle of Geritol.

Ted made some bland introductory remarks. Then, a wheel –- not unlike the Wheel of Fortune -- was spun to determine who went first, second, third, etc. As the contraption went around, the announcer would say, "Round and round she goes and where she stops nobody knows."

Like "American Idol" -- although far less embarrassing for the performers -- the first wave of contestants were screened, usually at New York’s Radio City Music Hall, and those who survived were asked to compete on the show. This part was not televised, as far as I can recall. As I remember it, most of the contestants were singers, but there were also ventriloquists, jugglers, musicians, bands, tap dancers, synchronized dancers, baton twirlers, accordion players, comics, choirs, barbershop quartets and the like. Many were youngsters. It was cute. And a bit cheesy. They’d come onstage and usually perform in front of a plain backdrop -- no props, no colored lights, no bells and whistles.

Unlike "American Idol," there was no judges panel. Winners were chosen solely by the audience by way of telephone, with the phone number displayed at the bottom of the TV screen. Later on, letters (you know, those things they used to write on paper with something called a "pen") were also accepted. As I recall, those who won the first round were asked back the following week. If you won three times, you were invited to perform your act at the show’s yearly championship. There were cash prizes, but since many of the contestants were young, the grand prize was a $2,000 scholarship.

How many of the winners became successful in show business? According to the show’s official Web site, Gladys Knight got her start on "Amateur Hour" in 1952 at the age of 7. Here's Ann-Margret appearing at 17:

Here's future "Fame" star Irene Cara singing a song in Spanish in 1967, when she was 8.

Singer Pat Boone appeared on the show. Soprano Maria Callas was a plump 12-year-old when she appeared, belting out "Caro Nome."

Others who appeared on the show included Robert Klein, Raul Julia, Connie Francis, Alan King, Freda Payne and Joey Bishop. And Frank Sinatra got a boost from appearing on the radio version.

Sure, "The Original Amateur Hour," didn’t have "Idol’s" fancy sets or phony behind-the-scenes drama, or sophisticated bands, or prompted audiences, but it made up for its drabness because it was real. And corny. But I’d take Ted Mack over Ryan Seacreast any day.