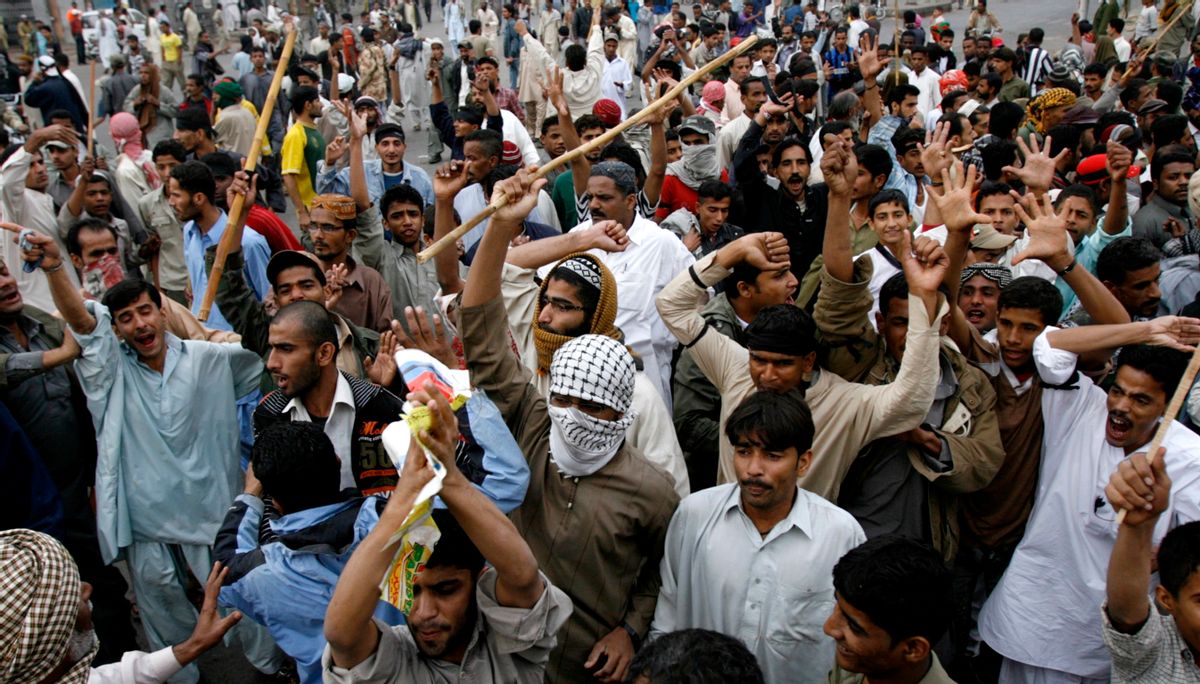 Men shout slogans during a protest rally on the streets of Karachi January 11, 2010. Several thousands protested against paramilitary and police search operation after a spate of violence in the city. They accused forces of targeting innocent people during the raid in which a paramilitary spokesman said about a dozen suspects were detained. REUTERS/Athar Hussain (PAKISTAN - Tags: POLITICS CIVIL UNREST) (Reuters)
--

The ongoing political turmoil in a major Pakistani city to which few Americans pay much attention could nevertheless prove pivotal to the Obama administration's AfPak project.

Ten more functionaries from various parties were assassinated in the southern Pakistani port city of Karachi on Sunday, on top of the three dozen killed from Thursday through Saturday. Many of those killed have been from the MQM (Muhajir Qaumi Movement), the dominant party in Karachi, which maintains a disciplined and well armed urban militia. Although the situation is murky, this violence appears to be the manifestation of an intense struggle between the MQM and the ruling Pakistan People's party, which controls the province of Sindh in which Karachi is located, as well as the national government. On Saturday, the MQM blamed the violence against its party workers on what it called thugs from the poor district of Lyari, a PPP stronghold. Since 2008 the MQM and the PPP had formed a parliamentary alliance of convenience in Islamabad. But now MQM leaders are saying they will withdraw from the national government.

I am speculating, but I wonder if the PPP in Lyari took its cue from remarks of interior minister Rehman Malik this weekend that he would push for the expulsion of what he characterized as 2 million illegal aliens from Karachi, as well as for the de-weaponization of the city. The MQM represents the interests of what are called the Muhajirs, the Urdu speaking immigrants from India who came as part of the partition of British India into Muslim majority Pakistan and Hindu majority India in 1947. Those outside the MQM in Karachi resent its almost black shirt tactics and its armed paramilitary. (Though to be fair, some MQM leaders have also called for an end to the flow of weapons into the city; some weapons are smuggled by the 2-million strong Pashtun population, a tiny fringe of which sympathizes with the Taliban.) Moreover, the native Sindhis, who support the PPP, feel that the Muhajirs’ command of the Urdu gave them special access to lucrative government jobs as well as coveted places in universities. (Urdu is Pakistan's national language, but is not spoken natively by Punjabis, Sindhis, Baluchis, or Pashtuns, whereas the Muhajirs speak it at home and so have a linguistic advantage with regard to the national language.) Rumors abound in Pakistan that poor Indian Muslims from provinces such as Bihar continue illegally to immigrate into the city, or are victims of human trafficking, as with poverty-stricken Bihari girls who are then pimped. Such immigration, however, is small and certainly not in the millions!

In the hothouse atmosphere of Pakistani popular thought on geopolitics, Karachi is also thought a hotbed of espionage and fifth column activities by Hindu Indians working undercover and pretending to be Muhajirs. The Indian version of the CIA is called R.A.W. -- pronounced "raw" -- or the Research and Analysis Wing, and virtually all untoward incidents in Pakistan are typically blamed on its activities. Rehman Malik has even blamed RAW for the activities of radical Muslim extremists such as the Pakistani Taliban. Obviously, I think this sort of charge is 'way overdone in Pakistan. So in local Karachi terms, the call to expel illegal immigrants and to disarm the city could well have been taken by Sindhi PPP activists as a coded signal to begin a war on the MQM.

This Pakistani observer suggests that the struggle broke out in part because of recent changes in how nazims or mayors are chosen. If the central government goes back to appointing them, that change might benefit the PPP and hurt the MQM's ability to maintain a stranglehold on the city's politics.

Malik spent all of Sunday into the wee hours in talks with MQM leaders, attempting to placate them. Party leaders on both sides blamed the violence on petty criminals rather than on party stalwarts.

Jang reports in Urdu that police arrested 10 suspects in various parts of Lyari on Sunday, presumably in a bid to mollify the MQM-- arrests that provoked demonstrations by the women of the neighborhood. Geo Satellite TV is reporting dozens of arrests. The PPP member of parliament for Lyari, Ismail Nabil Gobol, accused Malik of only launching the search operation in a cynical attempt to keep his job as Interior Minister. Gobol said on GEO that if other districts were also being searched, the operation might be acceptable, but targeting Lyari was unfair and showed how political the police action is.

At the level of national politics, it is not entirely clear there were the MQM to withdraw its support, that the government of Prime Minister Yusuf Raza Gilani could survive a vote of no-confidence in Parliament. In case the PPP government fell, president Asaf Ali Zardari would offer the leader of a rival party the opportunity to form a new government. That party would likely be the Pakistan Muslim league (N), led by Nawaz Sharif. If the PMLN also failed to form a government, then snap our parliamentary elections would be held.

This scenario would introduce very substantial instability into the course of Pakistani politics at precisely the moment when the Obama administration most needs a stable, reliable partner in the fight against the Taliban and al-Qaida. A dark cloud on the horizon is that the PMLN and only got about a third of the seats in parliament in the last election of February 2008, and even if it bettered its performance in the next election, it might be beholden to small religious parties in a way that the PPP currently is not. In the 2008 elections, the major fundamentalist parties, including the Jama'at-i Islami, declined actively to run, in protest against the polls being held under the auspices of a military dictatorship. Since the military dictatorship has been ended, the religious right wing parties would likely run in the next election, and might win enough seats to make them power brokers in forming the next government.

The fundamentalist parties may well benefit electorally in the next election from Obama's anti-al-Qaida drone strikes on Pakistani soil, which are extremely unpopular. If his policies brought back the Jama'at-i Islami as a major parliamentary force, Obama will have potentially undermined his efforts against Muslim extremism by violating Pakistani Muslims' sense of sovereignty. Obama supported Pakistan's return to democracy, but democracies are unpredictable.

Some figures in the fundamentalist religious parties have gone so far as to deny the existence of al-Qaida, while others actively helped train the Taliban. Such a government might be substantially less cooperative with President Obama’s “war on al-Qaida" than is Mr. Zardari. A new government more beholden to the Pakistani religious right might also appoint a new and more hard line military Chief of Staff. I think it certainly would demand an end to US drone strikes on militant strongholds in the northwest of the country.

A very great deal hangs, therefore, on whether the MQM and the PPP can manage to patch up their current sanguinary feud, and whether Mr. Zardari can retain the MQM as part of his governing coalition.

All this is not to mention that were security in Karachi substantially to worsen, it could form a further impediment to the U.S. and NATO's use of the port city to transship essential matériel up to the Khyber Pass and into Afghanistan. So far there is no question of the port being thrown into that kind of dire turmoil. But in the past two weeks there was a major bombing on the occasion of the Shiite holy day of Ashura, followed by intensive rioting and arson of a sectarian character that destroyed thousands of shops and wiped out employment for 10,000 workers, followed by the recent outbreak of a concerted campaign of assassination between local MQM and PPP party workers in Karachi. Quite apart from anything else, Karachi is Pakistan's financial hub and a center of light industry, and the violence already done there will have a negative impact on the country’s economy this year.

Meanwhile,a new report has come out on Pakistan's struggle with Taliban and other militants in 2009, mainly in the country's northwest, hundreds of miles from Karachi. The government maintains that it killed about 12,000 militants and wounded a similar number, as well as capturing about 12,000, as well. (These numbers are suspiciously similar to me). Only 75 of those captured were "al-Qaida" (I presume, Arabs). A little over 3,000 civilians died in militant attacks.

This statistic shows you that most of the fighting in Pakistan is between government troops and the Taliban or similar groups of Pashtun religious nationalists; al-Qaida is a small part of the story.

It is not clear if the statistics include CIA drone strikes. For the militarization of the CIA in Afghanistan and Pakistan, see Tomdispatch.com.