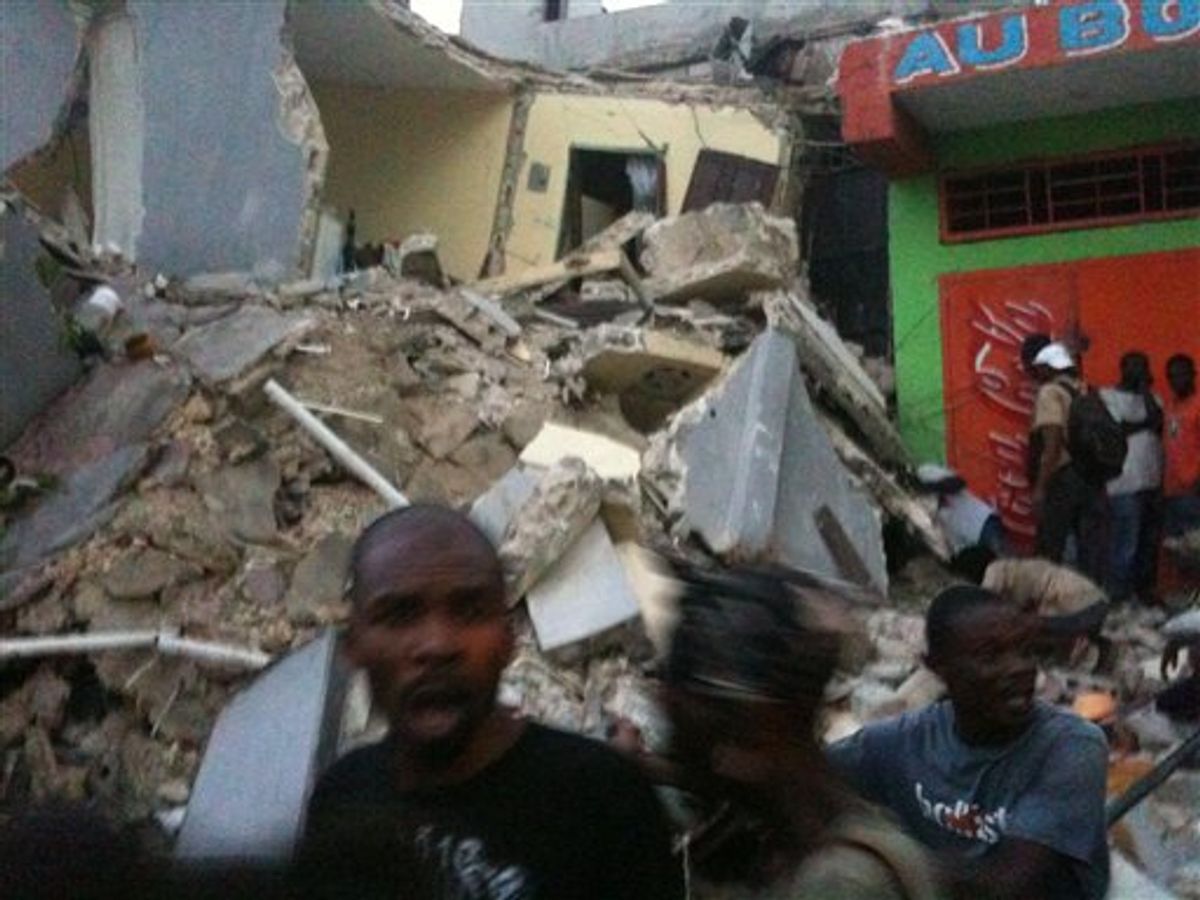 Haitians piled bodies along the devastated streets of their capital Wednesday after the strongest earthquake hit the poor Caribbean nation in more than 200 years crushed thousands of structures, from schools and shacks to the National Palace and the U.N. peacekeeping headquarters. Untold numbers were still trapped.

The devastation was so complete that it seemed likely the death toll from Tuesday afternoon's magnitude-7.0 quake would run into the thousands. France's foreign minister said the head of the U.N. peacekeeping mission was apparently among the dead.

International Red Cross spokesman Paul Conneally said an estimated 3 million people may have been affected by the quake and that it would take a day or two for a clear picture of the damage to emerge.

People pulled bodies from collapsed homes, covering them with sheets by the side of the road. Passersby lifted the sheets to see if a loved one was underneath. Outside a crumbled building the bodies of five children and three adults lay in a pile.

The United States and other nations began organizing aid efforts, alerting search teams and gathering supplies that will be badly needed in the Western Hemisphere's poorest country. The international Red Cross and other aid groups announced plans for major relief operations.

"Haiti has moved to center of the world's thoughts and the world's compassion," said British Prime Minister Gordon Brown.

It was clear tens of thousands lost their homes and many perished in collapsed buildings that were flimsy and dangerous even under normal conditions.

"The hospitals cannot handle all these victims," Dr. Louis-Gerard Gilles, a former senator, said as he helped survivors. "Haiti needs to pray. We all need to pray together."

A young American aid worker was trapped for about 10 hours under the rubble of her mission house before she was rescued by her husband, who told CBS's "The Early Show" that he drove 100 miles (160 kilometers) to Port-au-Prince to find her when he learned of the quake.

Frank Thorp said he dug for more than an hour to free his wife, Jillian, and a co-worker, from under about a foot of concrete.

Even relatively wealthy neighborhoods were devastated.

An Associated Press videographer saw a wrecked hospital where people screamed for help in Petionville, a hillside district that is home to many diplomats and wealthy Haitians as well as the poor.

At a destroyed four-story apartment building, a girl of about 16 stood atop a car, trying to peer inside while several men pulled at a foot sticking from rubble. She said her family was inside.

"A school near here collapsed totally," Petionville resident Ken Michel said Wednesday after surveying the damage. "We don't know if there were any children inside." He said many seemingly sturdy homes nearby were split apart.

U.N. peacekeepers, many of whom are from Brazil, were distracted from aid efforts by their own tragedy: Many spent the night hunting for survivors in the ruins of their headquarters.

"It would appear that everyone who was in the building, including my friend Hedi Annabi, the United Nations' Secretary General's special envoy, and everyone with him and around him, are dead," French Foreign Minister Bernard Kouchner said Wednesday, speaking on RTL radio.

Much of the National Palace pancaked on itself, but Haiti's ambassador to Mexico, Robert Manuel, said President Rene Preval and his wife survived the earthquake. He had no details.

The quake struck at 4:53 p.m., centered 10 miles (15 kilometers) west of Port-au-Prince at a depth of only 5 miles (8 kilometers), the U.S. Geological Survey said. USGS geophysicist Kristin Marano called it the strongest earthquake since 1770 in what is now Haiti.

Most of Haiti's 9 million people are desperately poor, and after years of political instability the country has no real construction standards. In November 2008, following the collapse of a school in Petionville, the mayor of Port-au-Prince estimated about 60 percent of buildings were shoddily built and unsafe in normal circumstances.

Tuesday's quake was felt in the Dominican Republic, which shares the island of Hispaniola with Haiti, and in eastern Cuba, but no major damage was reported in either place.

With electricity knocked out in many places and phone service erratic, it was nearly impossible for Haitian or foreign officials to get full details of the devastation.

"Everybody is just totally, totally freaked out and shaken," said Henry Bahn, a U.S. Department of Agriculture official visiting Port-au-Prince. "The sky is just gray with dust."

In Washington, State Department spokesman P.J. Crowley said that U.S. Embassy personnel were "literally in the dark" after power failed.

"They reported structures down. They reported a lot of walls down. They did see a number of bodies in the street and on the sidewalk that had been hit by debris. So clearly, there's going to be serious loss of life in this," he said.

President Barack Obama offered prayers for the people of Haiti and said the U.S. stood ready to help. Secretary of State Hillary Rodham Clinton said the U.S. was offering full assistance -- civilian and military -- and a national organization of registered nurses called for nurse volunteers to provide care in Haiti.

Elizabeth Byrs, a spokeswoman for the U.N.'s humanitarian office, said it was working with independent aid agency Telecoms Sans Frontieres to get phone lines working again -- a key element in organizing relief efforts.

Venezuela's government said it would send a military plane with canned foods, medicine and drinking water and provide 50 rescue workers. Mexico, which suffered an earthquake in 1985 that killed some 10,000 people, planned to send doctors, search and rescue dogs and infrastructure damage experts.

Italy said it was sending a C-130 cargo plane Wednesday with a field hospital and emergency medical personnel as well as a team to assess aid needs. France said 65 clearing specialists, with six sniffer dogs, and two doctors and two nurses were leaving.

Edwidge Danticat, an award-winning Haitian-American author was unable to contact relatives in Haiti. She sat with family and friends at her home in Miami, looking for news on the Internet and watching TV news reports.

"You want to go there, but you just have to wait," she said. "Life is already so fragile in Haiti, and to have this on such a massive scale, it's unimaginable how the country will be able to recover from this."