Game changing for the worse 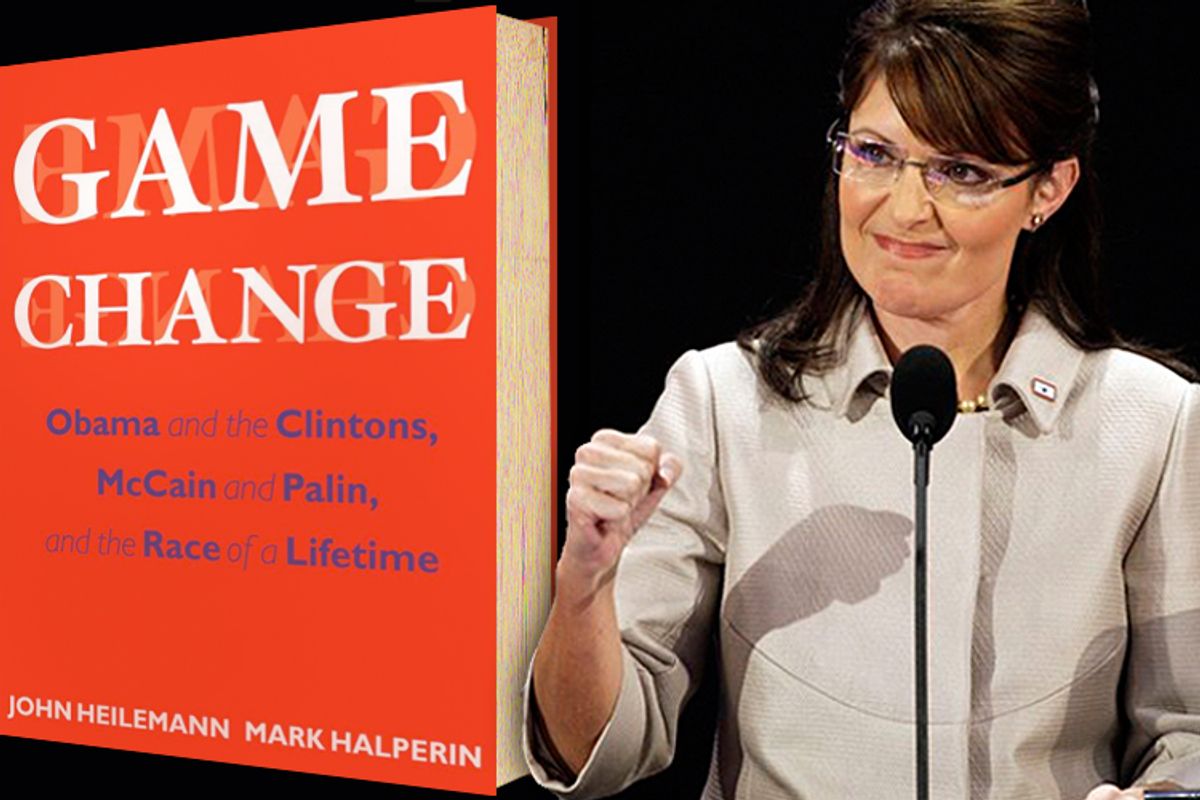 Rarely do I find myself sympathizing with Sarah Palin on any matter, including her endless recriminations about the press coverage she has endured since her rise to political superstardom. (That coverage, often superficial and weak, has made her a millionaire and a candidate for office far beyond her competence.) But like several of the other prominent political figures profiled in "Game Change," the much-buzzed book on the 2008 presidential campaign, Palin has a real reason to feel burned this time.

Based on material fed to them by McCain campaign advisors and strategists, whose animus against Palin is no secret, authors Mark Halperin of Time and John Heilemann of New York magazine describe Palin as stunningly ignorant, lazy, dangerous -- and possibly nuts. According to them, she didn’t know the difference between World War I and World War II or North and South Korea.

Those anecdotes and adjectives probably reflect the ultimate assessment of the hockey mom by the men responsible for her nomination (which tells us as much about them as about her). But shouldn’t Heilemann and Halperin have given Palin the opportunity to rebut, or at least deny, the stupid things she is accused of saying? ("60 Minutes"  did.)

Under the standards of traditional American journalism and the usual practices of the news organizations where Halperin and Heilemann have worked, the answer is an unequivocal yes. The same goes for Bill Clinton, whose supposedly scandalous remark about Obama “serving coffee” to him and Ted Kennedy was never checked with him or his aides, among others.

This is not to suggest that scenes or quotes in "Game Change" were necessarily invented by the unnamed sources, although many of the book’s sources were obviously motivated by lingering resentment. These are people, after all, who spent most of 2008 telling reporters how wonderful their candidates were -- and then spent the next two years whispering insults about those same politicians. So they may not be perfectly reliable, even when one of them corroborates another.

Uncertainty about the motives and memories of sources is an inherent aspect of news coverage, which is why that rule about checking quotes and soliciting responses exists. Evidently the rule can be discarded or at least attenuated in book-length nonfiction, where publishers apparently feel that denials and responses would disrupt the novelistic narrative flow. That isn’t really an adequate excuse -- and the dubious quotes that appear in a book like "Game Change" quickly wash over the ethical dam into the mainstream of journalism, where they are wrongly treated as factual.

There are plenty of other problems with "Game Change" and the style of establishment reporting that it represents. Its reliance on anonymous sniping and its disdain for substantive debate are all too typical of the Washington press corps. Its ritualistic bashing of the Clintons has been a cliché of Beltway journalism for well over a decade now. Its treatment of Elizabeth Edwards is borderline sadistic at this point. And its adulatory treatment of the presidential victor --  a hallmark of access journalism in the capital -- echoes the tone of Halperin’s last book, "The Way to Win," which lionized Karl Rove as a strategic genius. (That book appeared in the fall of 2006, only weeks before said genius saw his foolproof plan for generations of Republican dominance vaporized by angry voters.)

Gossipy reporting is a mainstay of modern news, including political journalism. But even Page Six routinely calls its victims for comment. Why shouldn’t book authors be expected to do the same?