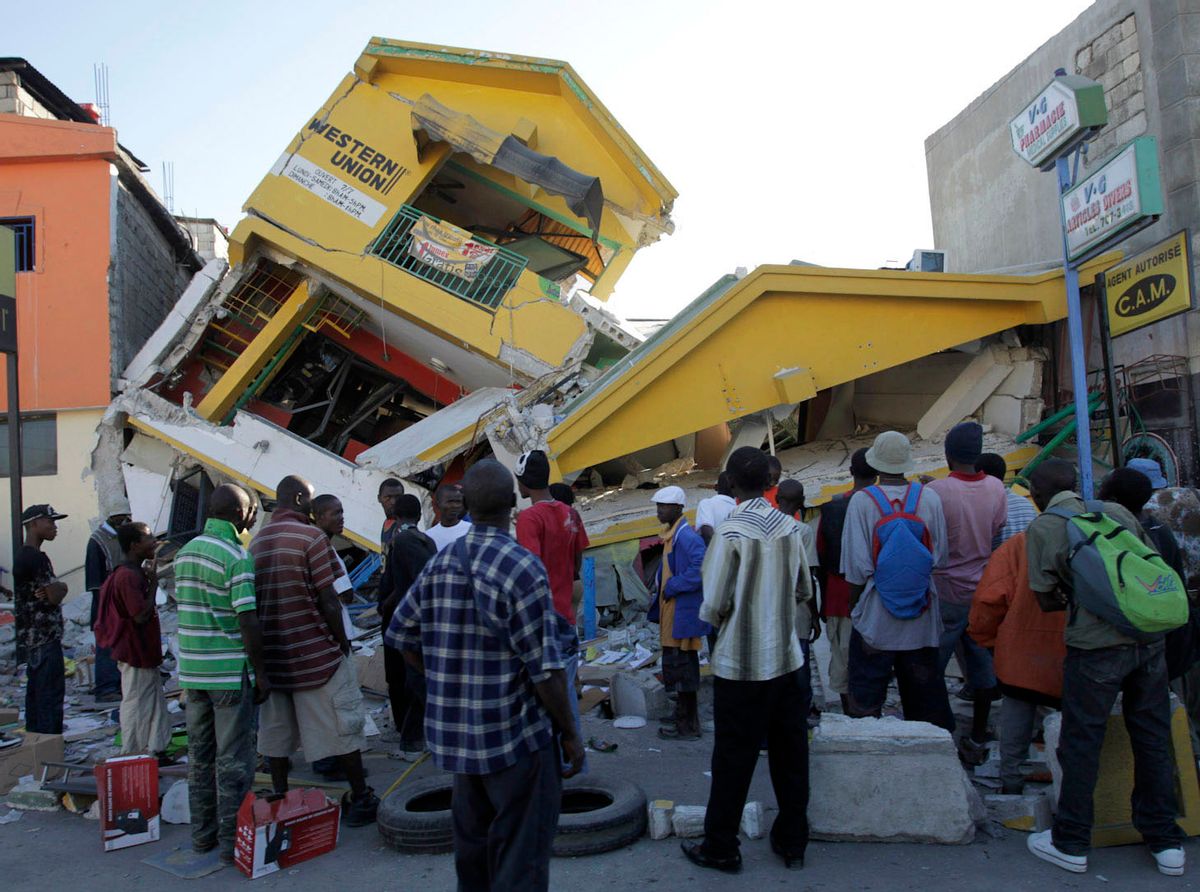 People look at a destroyed building in Port-au-Prince January 14, 2010. The death toll from Haiti's earthquake could be between 45,000 and 50,000, with a further three million people hurt or homeless, a senior Haitian Red Cross official said on Thursday. REUTERS/Jorge Silva (HAITI - Tags: DISASTER IMAGES OF THE DAY) (Reuters)
--

Officially, Bill Clinton is the U.N. special envoy to Haiti, appointed by Secretary-General Ban Ki-moon last summer, and in that post he is already deeply involved in the international relief and reconstruction effort for that devastated country. Unofficially, Clinton is the global “master of disaster," a position he has occupied ever since the Asian tsunami and Hurricane Katrina, when he joined with former President George H.W. Bush to raise and direct the expenditure of billions of dollars. So if he is suddenly appearing everywhere again in the wake of the earthquake, that should come as no surprise.

Behind the scenes, however  -- or at least when most Americans were paying no attention to the impoverished island republic -- Clinton has been working  steadily to improve conditions in Haiti for a long time. Over the past several years, his Clinton Global Initiative has served as a platform for the most effective development and rebuilding projects on the island, including  Partners in Health, the project created by the legendary Dr. Paul Farmer to fight HIV/AIDS and establish medical clinics in cities, villages and isolated rural areas there. When the current crisis abates and reconstruction resumes, Clinton’s foundation is certain to remain at the center of efforts to bring sustainable  water, energy, education,  health and  economic resources to the Haitians.

Meanwhile, on Wednesday evening, Clinton appeared with Ban before a special plenary session of the U.N. General Assembly, where he exhorted member countries to honor the memory of the lost U.N. officials and workers -- whose numbers remain unknown at this moment -- by saving the living. “We have a thousand details to work out. But we’ll do that,” he told them, after describing how the rescue efforts would proceed (and after Moon announced the immediate release of $10 million by U.N. agencies). "I ask for your support ... We owe it to our colleagues who perished in that earthquake yesterday. No one can ever doubt again what the relevance of the United Nations is to the 21st century, or what the devotion of its employees is to the common cause of humanity. We owe it to them to respond in the right way."

In fact, Clinton has spent months trying to collect hundreds of millions of dollars committed but not paid by donor nations to rebuild Haiti. He had  achieved a glimmering of success last fall with a campaign to encourage significant private investment there. Now he is trying to do what he does best -- to coordinate government, nonprofit and private charitable efforts to deal with what is surely one of the worst natural disasters in the history of the Western Hemisphere.

He left the podium soon after he delivered his remarks -- while the special plenary was still in session -- to begin a series of media appearances on  National Public Radio with Melissa Block, CNN (first with Wolf Blitzer and a taped phone call with Anderson Cooper) and then a chat with George Stephanopoulos for ABC’s World News Tonight. Between interviews, he was editing a  call to action for this morning’s Washington Post.

Amid the disturbing news, it was darkly amusing to observe how eagerly these outlets courted the former president -- only days after promoting "Game Change," a book that stretches journalistic rules to attack him. Block, Stephanopoulos, Blitzer and Cooper (who is in Haiti) all wisely refrained from asking him about that book’s allegations (which  turned out to be self-refuting in the most publicized matter concerning him).

All such trivial effluvia is off the screen, for the moment, with hundreds of thousands of lives apparently lost and hundreds of thousands more in peril. Within the first 12 hours or so of Clinton’s fundraising appeal, which began around 4 p.m. on Wednesday, his foundation’s dedicated Web page raised $2.6 million for Haitian relief. And that total doesn’t include the money raised via mobile texting (HAITI to 20222) at $10 per call -- which a foundation spokesperson said is already "catching wildfire."