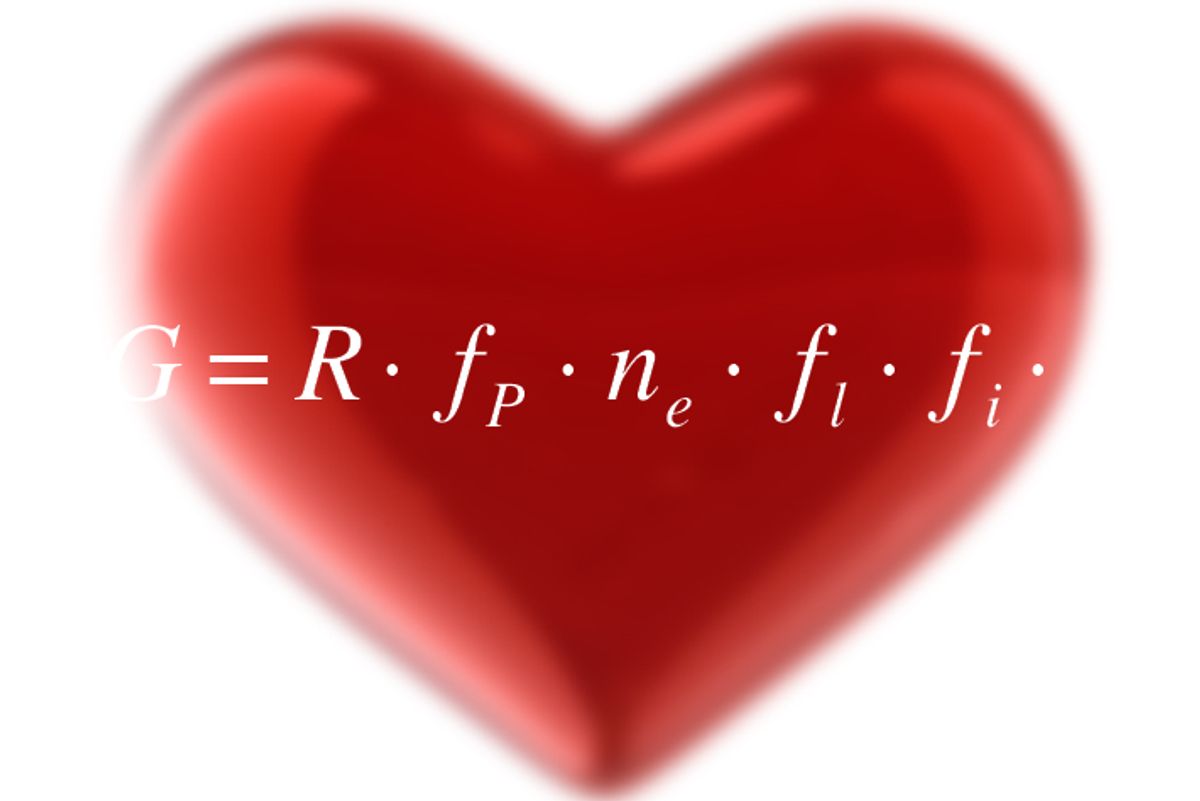 Men desperately in search of a ladyfriend might log on to Match.com, head to the local bar and toss back some liquid courage or drop a G to learn the art of picking up chicks -- but Peter Backus is not your average dude. He took a much more unique approach: writing a mathematical equation to calculate just how hopeless his chances were of finding love. In his paper, "Why I don't have a girlfriend," the Ph.D. candidate in economics employs an equation typically used to estimate the number of highly evolved alien life forms in our galaxy. I would make a crack about his single status having a little something to do with his thinking about women as "alien life forms," but, truth is, the paper is so clever and comically self-deprecating that it is utterly endearing. I mean, reading it made me whimper like I'd seen a speckled pup.

Behold the original equation: N = R* fp ne fl fi fc L. I go cross-eyed just looking at it, so I'm not even going to try to explain it. All you need to know is that he tweaked it to estimate the number of women who meet his basic requirements: They live in his hometown of London (to "avoid the difficulties of long distance relationship"), are between the ages of 24 and 34 ("I don't want to feel older than I am ... because I haven't read Twilight and don't know who the Jonas Brothers are"), have a college education ("we would have more in common") and are physically attractive to him ("it makes sex easier"). The result: 10,510 women. "That is 0.00017% of the UK and 0.0014% of Londoners, which doesn't seem so bad," he writes.

Only, that doesn't take into account the likelihood of those women finding him attractive, being single and, "perhaps most importantly," being likable. Including these factors, his estimate of the potential girlfriends out there for him drops to 26. "So, on& a given night out in London there is a 0.0000034% chance of meeting one of these special people, about 100 times better than finding alien civilization we can communicate with." It's at this point that I let out a quavering: Awww. But, of course, it isn't that simple. Sometimes something develops with someone you didn't find physically attractive at first glance; age brackets and educational backgrounds turn out not to matter; or, as I've inconveniently found, you fall for someone who lives in another country. And, sometimes, you toil over a mathematical equation that proves the utter hopelessness of your finding romance, only to ... find a girlfriend. Backus has been seeing a special lady for six months now -- so, nerds and non-nerds alike, take heart.