A disaster everyone knew would happen

No one should be surprised at the devastation wrought by the Haitian earthquake. But who should be blamed? 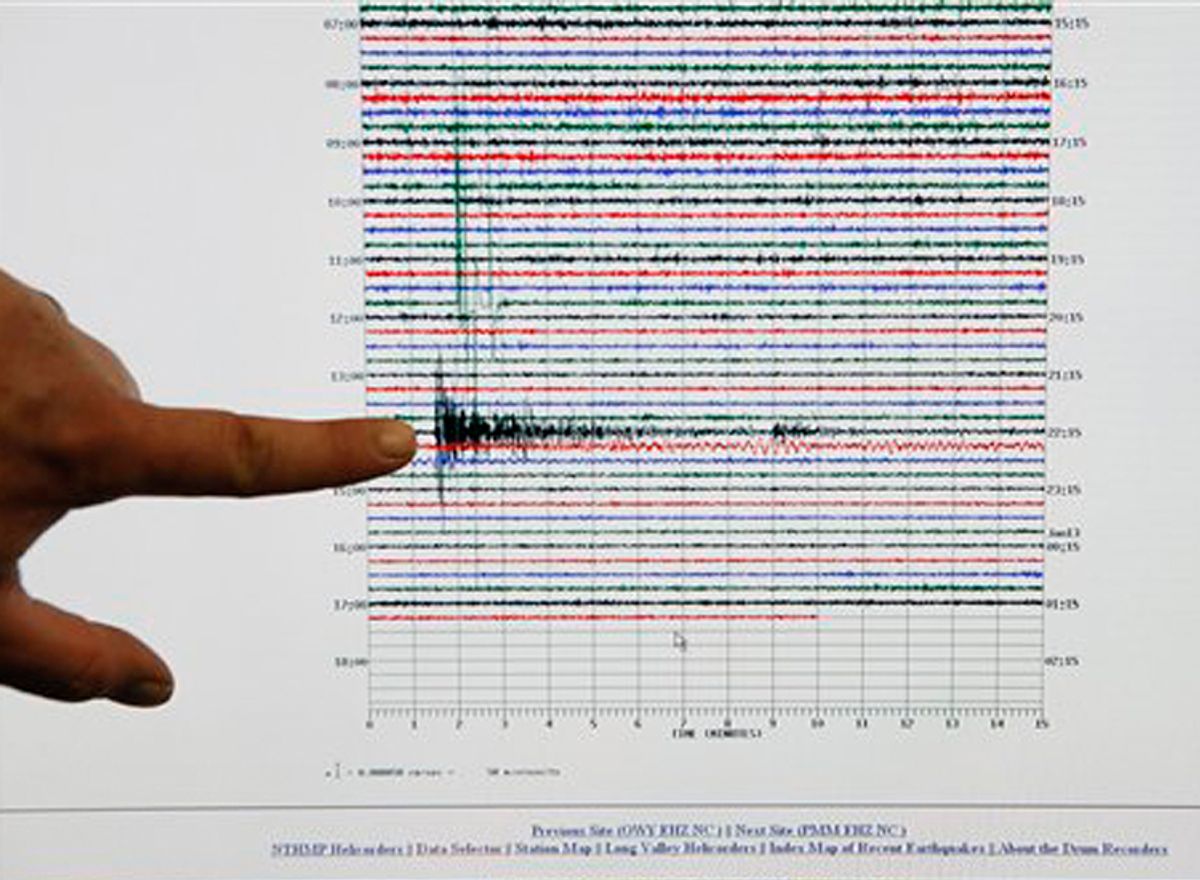 A seismic analyst at the Caltech Seismological Laboratory shows the 7.0 peak from the Haiti earthquake.
--

Within hours of the earthquake that devastated Haiti, the tweets were flying: Just a year earlier, Patrick Charles, a geologist at the University of Havana, had predicted that a major earthquake was imminent along the Enriquillo Fault Zone that runs under the nation's capital, Port-au-Prince.

"Conditions are ripe for major seismic activity in Port-au-Prince," he told the French-language Haitian newspaper, Le Matin in October 2008. "The inhabitants of the Haitian capital need to prepare themselves for an event which will inevitably occur... Thank God that science has provided instruments that help predict these types of events and show how we have arrived at these conclusions."

Barely a month later, after the catastrophic collapse of a school in Petionville, the mayor of Port-au-Prince warned that 60 percent of Haiti's buildings "were shoddily built and unsafe normally." A 2005 report from the Organization of American States' Department of Sustainable Development noted that "There is no national building code in Haiti." The loss of thousands of lives in flooding in 2004 was attributed in part to "the absence of land use zoning and building guidelines, and comprehensive enforcement mechanisms."

There is no mystery to this enormous disaster. As the Haitian Ambassador to the United States, Raymon Alcide Joseph, told CNN on Tuesday, "we had been expecting this catastrophe."

Haiti had been warned of the possibility of a major earthquake, and Haiti knew that its infrastructure was highly vulnerable. The real mystery, then, is whether anything could have been done to prevent, or at least ameliorate, the current nightmare. Or at least, that's the mostly unspoken subtext to all the chatter commenting on Patrick Charles' prescient prediction. How could we have let this happen?

It's an unfair question. As the poorest state in the Western hemisphere, Haiti has trouble feeding its population, providing citizens with the most basic health care, maintaining a semblance of a functioning political system, and coping with some of the worst environmental degradation in the world. Making sure buildings are up to code was never going to rank high on the priority list, even if everybody knew the situation was a disaster waiting to happen. In Haiti, every day is a disaster.

Some commentators have made comparisons between Haiti and New Orleans, noting that in both cases poor people bore the brunt of a natural disaster. But there's a key difference -- the United States had the resources to do far better. Haiti doesn't.

The more troubling, and hard to answer question, is why Haiti is so poor and dysfunctional in the first place. There are many proposed explanations, some of which were rounded up in a post earlier today by Tyler Cowen at Marginal Revolution, but even Cowen admits he doesn't find them very satisfactory. But one factor does stand out -- the destructive 30-year rule by the Duvalier family, "Papa Doc" and "Baby Doc."

In 1957, Francois Duvalier was elected president in what is generally considered a free and open contest. He then dedicated himself singlemindedly to the task of wiping out Haiti's nascent civil society, terrorizing the population with his dread Ton Ton Macoute secret police, embezzling vast sums of money for himself, naming himself President-for-life, and turning the government into a dynastic dictatorship which he passed to his son, Jean Claude, shortly before his death in 1971. Jean Claude continued to carry on the family tradition until his ouster in 1986, but is still alive, living relatively comfortably in France.

You don't have to look too hard for historic cultural reasons explaining Haiti's plight (though there is no doubt that the nation has had an extraordinarily violent history). The Duvaliers crippled the country -- Haiti essentially experienced almost no economic growth during their 30 year tenure. If you want to blame the lack of up to date building codes -- and their enforcement -- on anyone, blame it on them.