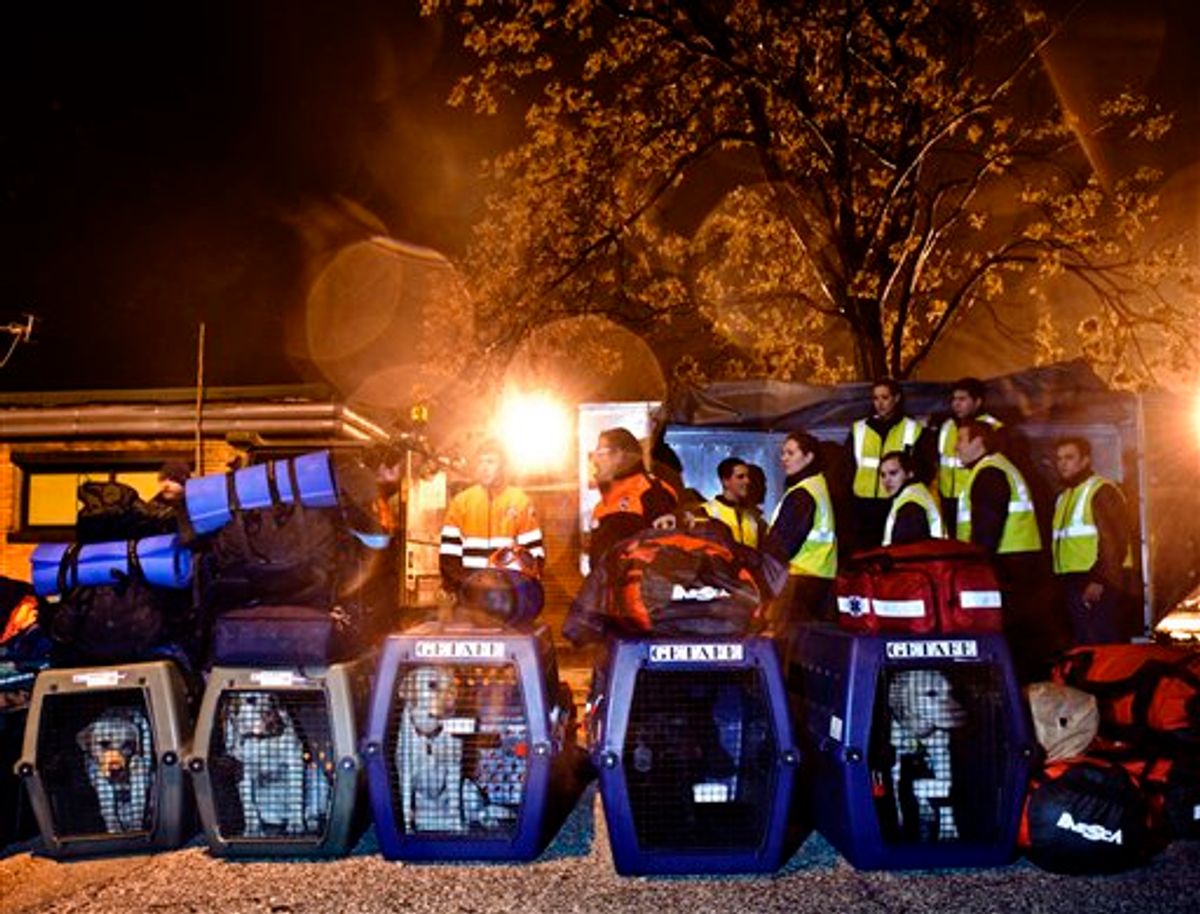 Rescue dogs are seen in their enclosure before leaving for Haiti at the Torrejon military airbase in Torrejon de Ardoz, Spain, Wednesday Jan. 13, 2010. Firefights without Borders, the International Red Cross and other aid groups said they are preparing a major disaster relief effort in Haiti after a powerful earthquake struck the capital. (AP Photo/Daniel Ochoa de Olza) (AP)
--

The U.N. says rescue workers and relief goods are pouring into Haiti from around the world, but aid workers are running into huge problems reaching people trapped under buildings or feeding hungry survivors.

The World Food Program said Thursday that damage to Haiti's port in the capital Port-au-Prince is preventing ship deliveries to quake-struck region. It said the city's airport is open but straining to handle dozens of incoming flights of supplies and rescuers.

Desperate quake survivors, fearing more temblors, are also standing in the middle of roads and slowing the transport of food and other crucial aid.

The World Health Organization said heavy damage to at least eight Port-au-Prince hospitals is slowing doctors' ability to treat the thousands of injured.

BEIJING (AP) -- Asian leaders cited their own experiences with natural disasters Thursday in offering help to quake-shattered Haiti as part of a massive international effort to alleviate the effects of the catastrophe.

Haitian officials have predicted a horrific death toll of more than 100,000 in the wake of the magnitude-7 quake Tuesday that left most of the capital Port-au-Prince in rubble.

Haiti's devastation is all too familiar to Indonesia: a mammoth quake struck off the country's western coast in 2004, spawning a tsunami that killed about 230,000 people in 14 countries -- half of them in Indonesia.

"As a country that has been itself devastated by a similar situation, we are absolutely saddened by what's happening in Haiti," Foreign Minister Marty Natalegawa said at a meeting of the Association of Southeast Asian Nations in Vietnam. "We call on the ASEAN community, including ourselves, of course, to do what we can do to assist them."

President Barack Obama promised an all-out rescue and humanitarian effort including military and civilian emergency teams from across the U.S. The aircraft carrier USS Carl Vinson was expected to arrive off the coast Thursday and the Navy said the amphibious assault ship USS Bataan had been ordered to sail as soon as possible with a 2,000-member Marine unit.

"We have to be there for them in their hour of need," Obama said.

U.S. Secretary of State Hillary Rodham Clinton cut short an extended trip to the Asia-Pacific region to deal with the earthquake crisis in Haiti, and Defense Secretary Robert Gates called off a planned trip to Australia where he and Clinton were to attend an annual summit.

Clinton told reporters in Hawaii on Wednesday that she would return to Washington to help oversee U.S. relief efforts instead of continuing on to Papua New Guinea, Australia and New Zealand as she had initially planned.

Clinton says the United States will do all it can to help Haiti surmount a "cycle of hope and despair."

The United Nations has released $10 million from its emergency funds, even as U.N. workers and peacekeeping troops on the island nation at the time of the quake struggled with their own losses. The U.N. headquarters building collapsed, and at least 16 personnel are confirmed dead, with up to 150 still missing.

"We'll be using whatever roads are passable to get aid to Port-au-Prince, and if possible we'll bring helicopters in," said Emilia Casella, a spokeswoman for the U.N. food agency in Geneva.

Its 200 staff in Haiti were trying to deliver high-energy biscuits and other supplies, despite looting and the threat of violence in a nation long plagued by lawlessness.

The Red Cross estimated that some 3 million people will require aid, ranging from shelter to food and clean water, and said many Haitians could need relief for a full year.

The World Bank said it would provide $100 million in emergency aid to Haiti to support recovery and reconstruction work. Experts would be sent to assess the scope of the damage and help prioritize where needs are greatest.

Other offers of money and aid poured in from across the world, including Asia.

"Having been victims of such natural calamities ourselves in the past few years, we are exchanging information and views," said Surin Pitsuwan, secretary-general for the Association of Southeast Asian Nations.

Meanwhile, China dispatched a chartered plane loaded up with 10 tons of tents, food, medical equipment and sniffer dogs that arrived in Haiti on Thursday. Accompanying the emergency materials were a 60-member earthquake relief team that had firsthand experience in the country's own quake disaster two years ago.

The world had sped to Beijing's aid during its May 2008 quake, which had rumbled across a huge swath of southwestern China, leaving almost 90,000 people dead or missing.

"Most of the members are very experienced," Liu Xiangyang, deputy chief of the National Earthquake Disaster Emergency Rescue Team, told the official Xinhua News Agency before their departure. China's Red Cross has also offered emergency funding of $1 million to Haiti.

Meanwhile, Australia pledged an initial $9.3 million for emergency humanitarian relief and reconstruction assistance, with about half going for emergency water, food and shelter, while the remainder will be for rehabilitation efforts.

Japan will provide up to $5 million in aid, along with $330,000 worth of tents and blankets, a Foreign Ministry official said. A four-member fact-finding mission will also be sent to determine what Japan can do to help.

The devastation is widespread, with the sheer number of dead bodies expected to pose a health and safety problem. The World Health Organization said it had sent specialists to help clear the city of corpses, and the International Red Cross was sending a plane Thursday loaded mainly with body bags.

Rescue teams from France and Switzerland were on their way, while Spain dispatched three planeloads of rescuers and 100 tons of tents, blankets and cooking kits.

The Israeli army sent in two planeloads of rescue staff and equipment to set up a field hospital in Haiti that can serve up to 500 people a day. The crew will include 220 rescue workers, including 40 military doctors and 24 nurses.

Israel was sending in an elite Army rescue unit of engineers and doctors.

The Red Cross federation has asked for $10 million in emergency donations to help fund its efforts in Haiti. The IFRC, which represents national Red Cross societies around the world, said it is still gauging the needs of people hit by the quake and will deploy specialists in relief coordination, water and sanitation, shelter, telecommunications and health as well as set up a field hospital.

The International Committee of the Red Cross has launched a dedicated Web site to help Haitians register and find missing loved ones.