Who do you trust?

Not the "Game Change" authors, any more than they trust their readers' intelligence 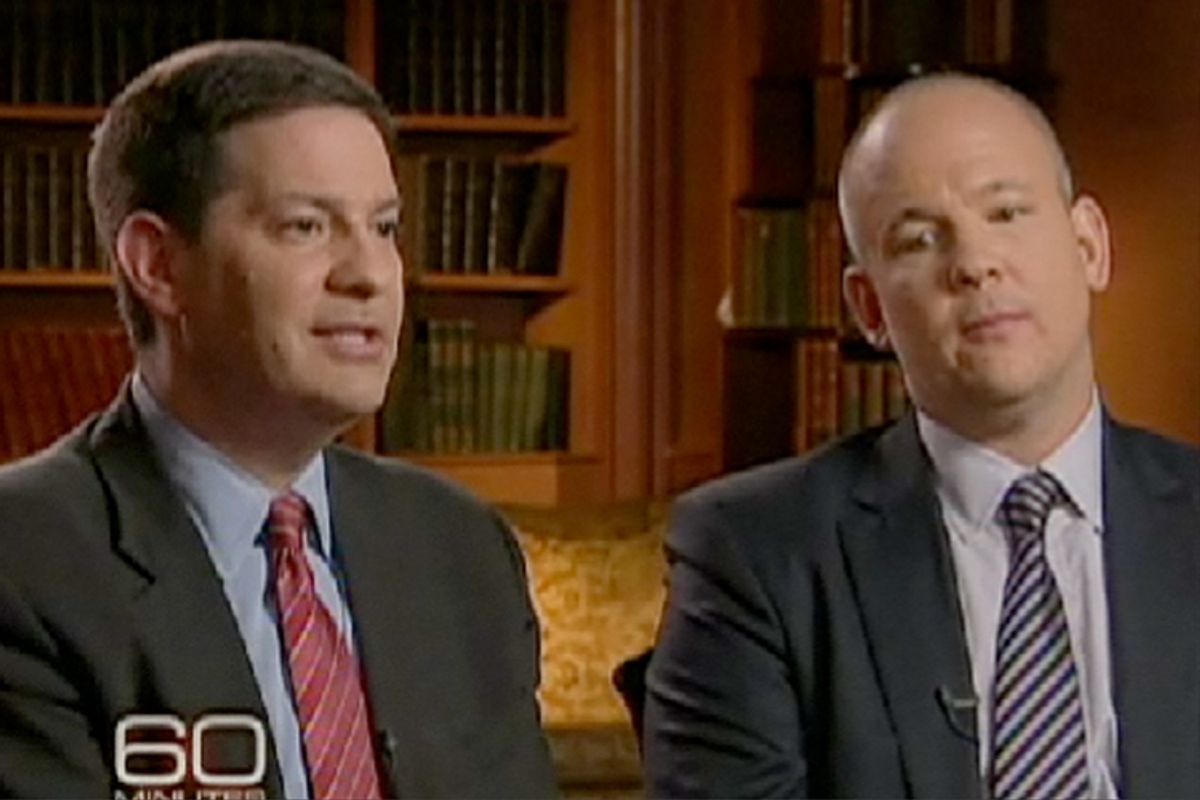 I refer to the ubiquitous publicity attending the release of Mark Halperin and John Heilemann's book "Game Change," reportedly an insider account of the 2008 presidential campaign by the largely anonymous aides and consultants who lost it. Observing virtually the entire "Gang of 500" -- as Halperin's clubby Internet rumor sheet The Note calls its audience -- going ape over the fool thing you could almost hear them emit an audible sigh of relief.

Enough tedium about healthcare, jobs, taxes, financial regulation and foreign affairs. Back to what really matters to these fops and courtiers: what Newsweek's Howard Fineman called "tweetable nuggets." As so often happens, Fineman speaks for them all: "A long analysis of the demographics of the electorate is not going to get you an HBO movie," he said. "But the tawdry psycho-drama of the Edwards's and a racist crack by Harry Reid will."

Hollywood gossip columnists Hedda Hopper and Louella Parsons had nothing on these two. Everywhere you looked -- "60 Minutes," CNN, NBC, even BBC America -- the authors were on television dishing the dirt: Psst, Cindy McCain hates her husband. Psst, Elizabeth Edwards is a highfalutin' witch. Psst, Hillary can't trust Bill out of her sight. Psst, Sarah Palin's a "mentally unstable" moron, and get this, Bill Clinton's also secretly a redneck bigot. Details at 6 and 10.

Now, a person of my temperament finds it easy to suspect that anybody who'd willingly submit to the daily torture of a national political campaign must have something psychologically wrong with them. (Not that you'd want a guy who owns more dogs than neckties running the country.)

But what strikes me as significant about this episode isn't whether Senate Majority Leader Harry Reid used the shocking phrase "Negro dialect" or noted that President Obama's skin color makes him what the Strom Thurmonds and Trent Lotts of the world used to call a "high yellow." Nor whether John Edwards' betrayed, terminally ill wife may have lashed out as described in one of the book's more grotesquely inhumane passages.

Rather, it's what the widespread acceptance of Halperin and Heilemann's brand of journalism says about our impoverished national discourse.

Everywhere they went on television, the authors were at pains to describe their many exhaustive interviews. Immediately before supplying her readers a detailed list of "tweetable nuggets" from "Game Change," the New York Times' capable book reviewer Michiko Kakutani outlined her reservations about their methods: "a spicy smorgasbord of observations, revelations and allegations -- some that are based on impressive legwork and access, some that simply crystallize rumors and whispers from the campaign trail, and some that it's hard to verify independently as more than spin or speculation (by) unnamed sources. The authors mix savvy political analysis ... with detailed reconstructions of scenes and conversations they did not witness firsthand (like an exchange that Hillary Rodham Clinton and Bill Clinton had on a beach in Anguilla)."

Kakutani, who's been making this fundamental objection to fictionalized Washington narratives by authors like Bob Woodward and James B. Stewart for years, also points out that the book has no source notes of any kind. "Trust us," the authors are in effect saying. "We're the ultimate insiders."

But can we trust their judgment and motives? Several bloggers have pointed to this passage on Page 218: "The day after Iowa, [Bill Clinton] phoned [Sen. Ted] Kennedy and pressed for an endorsement, making the case for his wife. But Bill then went on, belittling Obama in a manner that deeply offended Kennedy. Recounting the conversation later to a friend, Teddy fumed that Clinton had said, a few years ago, this guy would have been getting us coffee."

So Bill Clinton, formerly (and absurdly) known as America's first black president, thought the way to win Teddy Kennedy over was to mock Obama as a bus boy? Give me a break.

On evidence, no, you can't trust these guys any more than they trust their readers' intelligence, which appears to be not at all. Do I believe that Hillary Clinton, in another suspiciously paraphrased passage, initially wanted to decline the secretary of state job because her husband's big mouth might cause problems? No, but I'm confident she and Obama must have talked about how to handle the Gang of 500's voyeuristic obsession with her marriage.

On the subject of which -- along with the McCain and Palin marriages, I'm confident -- the best rule of thumb has always been that anybody who's talking doesn't know, and anybody who does know ain't talking.

With apologies to T.S. Eliot, this is the way the world ends: not with a bang but a whisper.