The people-power candidate brought a lot of Wall Street folks to the White House. That's no way to build a movement 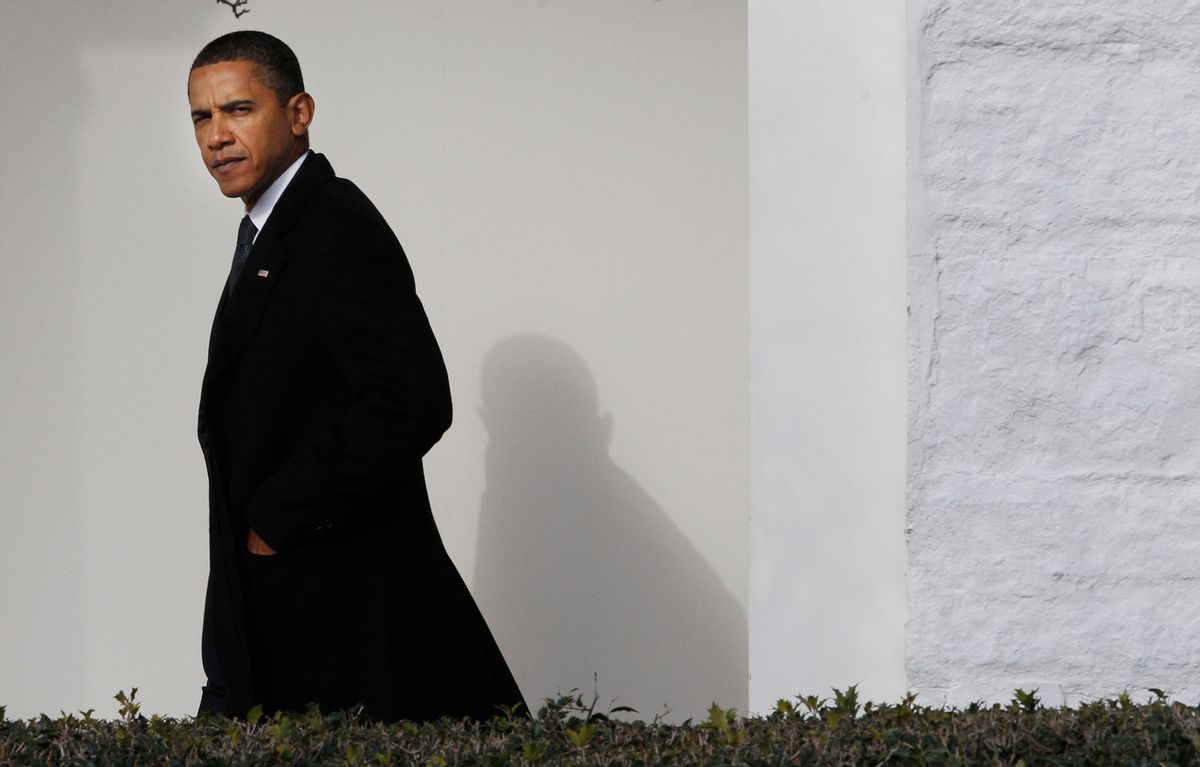 If the history of American politics can be summarized as an ongoing battle between organized money and organized people, American progressives had reason to be optimistic that the victory of Barack Obama in 2008 might tip the scales toward the needs and interests of ordinary people rather than those of big money.

His campaign’s success in both the primary fight against Hillary Clinton and the general election against John McCain was powered by an unprecedented wave of mass participation. The numbers were staggering: 13 million e-mail addresses collected (20 percent of his total vote), almost 4 million individual donors (more than double amassed by President George W. Bush in 2004), $500 million raised online, 2 million registered members of the my.BarackObama.com social network, tens of thousands of trained organizers.

As Obama entered office a year ago, one of the biggest questions on the minds of political observers was how this massive grass-roots force might help Obama shake up Washington. Expectations were high, not least because of Obama’s own campaign rhetoric. "The more we can enlist the American people to pay attention and be involved, that's the only way we are going move an agenda forward," he told audiences on the trail. "That's how we are going to counteract the special interests." On Jan. 17, 2008, when Obama announced the formation of Organizing for America (OFA) as the successor organization to his campaign, he told would-be supporters, "The movement you’ve built is too important to stop growing now." He promised that "volunteers, grass-roots leaders and ordinary citizens will continue to drive our organization, helping us bring about the changes we proposed during the campaign." More than half a million people watched the YouTube video of Obama's OFA announcement within just a few days.

Well, those heady days of hope, change and activism are long gone. The (useful) myth of Obama’s grass-roots philosophy collided with the reality of his embrace of Wall Street and the political establishment. The Obama movement days are over, perhaps never to return. If you doubt this, just ask yourself: How did a campaign supposedly powered by small donors and "super-volunteer" activists produce an administration whose economic chieftains come straight from the belly of big finance? How was it that the day after the election Wall Street was calling the shots on the most critical decisions of the nascent administration, while no one had a plan for keeping the grass-roots movement going?

The truth is that Obama was never nearly as free of dependence on big-money donors as the reporting suggested, nor was his movement as bottom-up or people-centric as his marketing implied. This is the big political story of 2009, the meta-story of what did, and didn't happen, in the first year of Obama's administration.

Despite Obama’s explicit promises, the people who voted for him weren't organized in any kind of new or powerful way, and the special interests — banks, energy companies, health interests, carmakers, the military-industrial complex — sat first at the table and wrote the menu.

Meet the new boss, same as the old boss
First, the money. The "small-donor revolution" got the headlines in 2008, but in terms of the most critical money in politics — early money, the kind that is given to help a candidate establish his viability, the kind that the candidate remembers after the election is over — there was nothing revolutionary about Obama’s funding. Between January and August 2007, according to the Campaign Finance Institute, 60 percent of Obama's donations were in amounts of $,1000 or more. Of all the early money raised by his campaign in 2007, more than one-third (36 percent) of his total came from the financial sector (compared with 28 percent for Hillary Clinton), reported campaign finance expert Thomas Ferguson. Finance, insurance and real estate — the so-called FIRE sector of the economy — showered nearly $40 million on him, 40 percent more than it gave to McCain. While it’s true that by the end of 2008 Obama could brag about getting more than half his money from people giving less than $1,000 each — and arguably this kind of funding is the cleanest, least self-interested money in politics — it didn't liberate this president from big-money interests.

The more we learn about the actual relationship between the Obama leadership team and the campaign’s volunteer base, the more it becomes clear that the men and women around Obama never seriously believed in empowering that base to challenge the power of Washington’s entrenched interests. It's true that campaign volunteers were often given substantial responsibilities in the field, and access to more data than would typically be shared by most top-down organizations. But Obama's campaign structure empowered its managers more than anyone else. That’s what I gleaned from a close reading of "The Audacity to Win," the campaign memoir of David Plouffe, Obama’s brilliant campaign manager. For Plouffe, the gigantic Obama e-mail list, its millions of donors and its vibrant online social network were essentially a new kind of top-down broadcast system, one even better than the old TV-dominated system. Near the end of his book he writes:

Our e-mail list had reached 13 million people. We had essentially created our own television network, only better, because we communicated with no filter to what would amount to about 20 percent of the total number of votes we would need to win ... And those supporters would share our positive message or response to an attack, whether through orchestrated campaign activity like door-knocking or phone calling or just in conversations they had each day with friends, family, and colleagues.

Volunteers for America, got a revolution?
If keeping the grass-roots Obama movement going had been a real priority for the president and his advisors, then why did they do no planning before Election Day for that contingency? Why was there no John Podesta preparing briefing books and options for how to convert millions of campaign supporters into long-term change makers? Why was there utter confusion in the days after the election, with online organizing director Chris Hughes scrambling to post a cryptic notice on the campaign Web site reassuring activists that myBO wasn’t going away? Why was there no attempt to involve Obama’s millions of small donors and time givers in deciding the structure and priorities of OFA, apart from filling out an online poll and attending a house party?

The experience of one such activist, Marta Evry of Venice, Calif., is illustrative of OFA’s stunted trajectory. A 45-year-old film editor who works on television shows and movies in Hollywood, she took off six months in 2008 to volunteer full time on the Obama campaign, ultimately working as a regional field organizer for Congressional District 36, managing some 1,500 volunteers who made more then 500,000 phone calls to swing states all over the country. Since then she has remained active as a community organizer, working on everything from healthcare reform, to marriage equality to California budget issues. Until this summer, she was working with Organizing for America. No longer.

Evry started out as a loyal supporter of OFA. In February 2008, she, along with thousands of others, participated in the group’s first national conference call, expecting to get marching orders on how they could fire up the base in support of Obama’s economic stimulus plan, which was already being whittled down by the powers that be in Washington. "But that didn't happen," she wrote in an e-mail to me back then. "Instead, we heard about house parties for the weekend and future conference calls. Building blocks for the future — yes. But action for the here and now? No." So Evry took it upon herself to start a Facebook group called "We are the Change," aimed at keeping the bill from being gutted, and within a week it had grown to 2,500 supporters who phone-banked senators and tried to shore up the bill.

For the next few months, she tried to work within the parameters set by OFA’s national and state staff but steadily chafed at being given limited and often meaningless tasks. In August, she was e-mailing the people on the We are the Change list, along with her friends in Venice for Change, a local Obama spinoff, to turn out at local congressional town hall meetings on healthcare and do battle with the tea party crowd. But she was also getting frustrated with OFA, feeling the group was too constrained by insider politics: "They had us calling into districts of lawmakers who were already on board with the [health care reform] bill just to list build." Obama’s pragmatic acceptance of the Stupak amendment to the House healthcare bill, and his abandonment of the public option, were the final straw for her:

"The thing I find completely heartbreaking about is to watch such an opportunity squandered right before our eyes," Evry e-mailed me recently. "I literally watched it happen. When I look back to how eager our volunteers were this time last year, those sea of faces in both Denver in 2008 and the inauguration in January ... [I] know that whatever movement there was is gone, gone, gone."

In fairness to OFA, it’s not as if the organization isn’t doing anything. Denuded of the resources given to the election field campaign and delayed by poor planning, its leadership has managed to staff up in all 50 states, conduct "listening tours," and rally supporters to show up at healthcare town halls and steel congressional Democrats’ spine in favor of passing a bill. But the organic connection that Obama forged with millions during the campaign — the "enthusiasm gap" that Plouffe describes eloquently in his book as the campaign’s secret weapon — is badly in need of repair. Hypothetically, Obama could do that if he came out fighting for truly tough financial re-regulation and climate change legislation this year. It also wouldn’t hurt, in my view, if he added comprehensive public financing of congressional elections to the top of his agenda, given how badly he’s been bloodied by the wealthy special interests who run Congress. But I’m not holding my breath."

Could things be different? Yes, but only if Obama and his advisors were willing to involve OFA volunteers as full partners in participating in the decisions affecting them. That would mean connecting people locally, not just through paid staffers, but directly to each other. And it would mean acting in a transparent manner, sharing the data collected from their massive list, and giving members a real say in the running of the organization. Inevitably, such a people-powered force would come into conflict with local Democratic Party power structures and officeholders — something the Obama brain trust has apparently decided it can’t risk. But it might also make members of Congress fearful of Obama’s movement and alter the calculus of Washington politics.

Unfortunately, after running the most brilliantly organized insurgent campaign in recent political history, Obama and crew have chosen to play an inside game in Washington and put their outside force in a carefully crafted holding pen, imagining they can turn the grass-roots juice on again in 2010, like flipping a switch. But now that they need it, heading into the tough headwinds of 10 percent unemployment and a frustrated electorate, the authentic movement is gone. Too late, Obama will learn the most basic lesson of grass-roots organizing: You can't order volunteers to do anything — you have to motivate them, and Obama's compromises to the powers that be have been tremendously demotivating. It’s a shame. A movement is a terrible thing to waste.

Micah L. Sifry's book "Spoiling for a Fight: Third-Party Politics in America" is available in paperback. He is also the co-editor of "The Iraq War Reader."