The anti-choice congressman is apparently being urged to stay. This isn't the kind of solidarity Democrats need 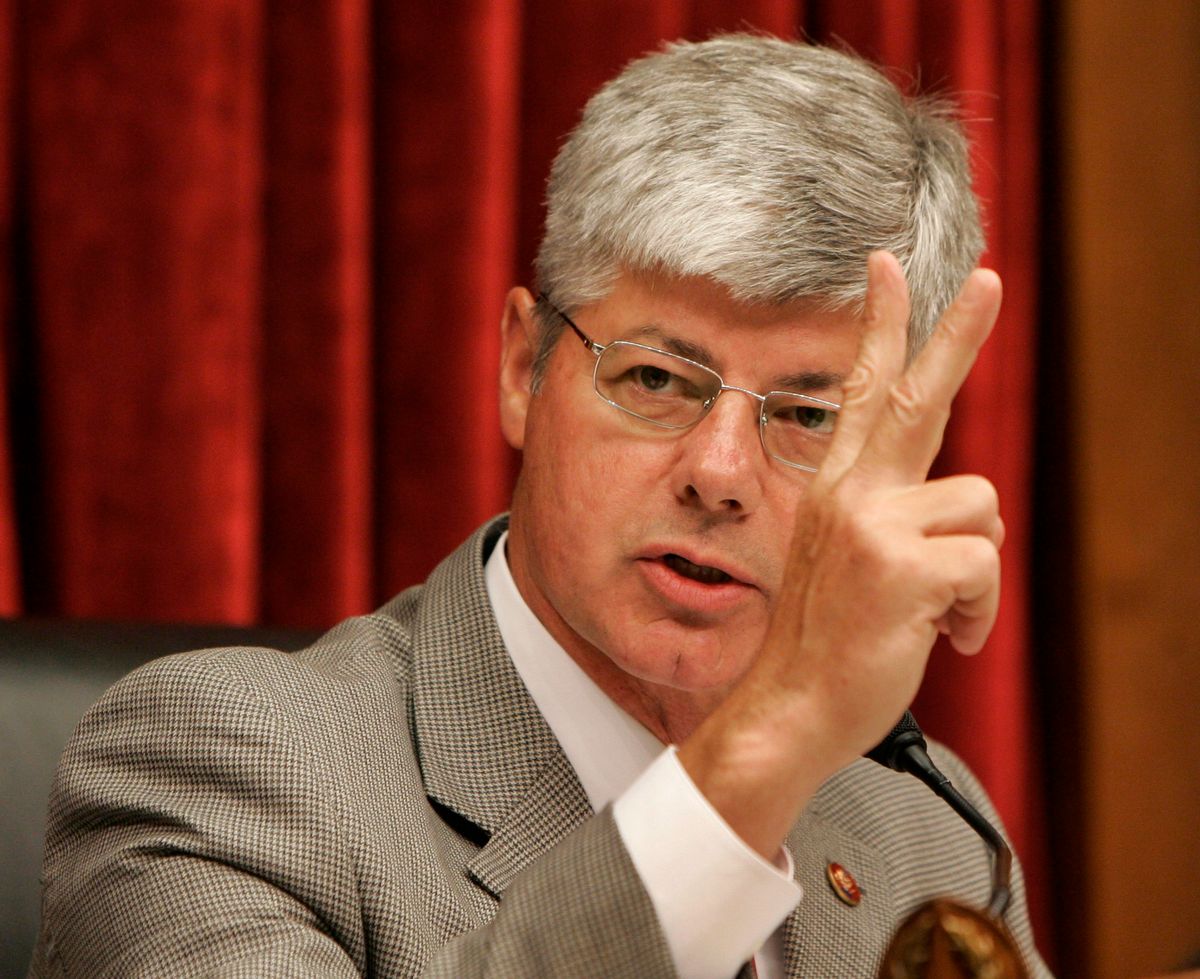 House Oversight and Investigations subcommittee Chairman Rep. Bart Stupak, D-Mich, asks a question of a panel of witnesses, on Capitol Hill in Washington, Monday, June 23, 2008, during a hearing on energy speculation and the high cost of crude oil. (AP Photo/Susan Walsh) (Associated Press)
--

Bart Stupak is apparently thinking of running for governor of Michigan. Of course I don't wish a Gov. Stupak, or even the threat of one, on the people of Michigan, but if it means he's gone from the House of Representatives, I say good riddance. The Democratic Congressional Campaign Committee, however, disagrees; Chairman Chris Van Hollen has reportedly phoned Stupak to urge him to run for reelection. And I mean, I can see Van Hollen's point. If Stupak doesn't run, there's a strong chance his seat will go to a Republican, and then what would happen? We might end up with someone representing that district who's 100 percent opposed to abortion, in favor of the death penalty, a champion of gun ownership -- even the kind of person who would be willing to sabotage healthcare reform because of his personal religious beliefs. That would be terrible!

Jos at Feministing attempts to understand the DCCC's logic here: "Because it matters if the person restricting reproductive rights has a D or R next to their name? Because the Democrats want to do the work of limiting abortion access all by themselves? Because it wasn't obvious enough there's no major party in the U.S. willing to take a stand for women's health?" And Jodi Jacobson at RH Reality Check says bluntly, "There you have it, gals. The Democratic Party once again has your back. To the firing squad."

NARAL Pro-Choice New York's Mary Alice Carr summed up the problem with our current Democratic leadership when I spoke with her a few months ago. "We have a Democratic majority in Congress, but we do not have a pro-choice majority. The party platform doesn't matter, because they'll still give us anti-choice Democrats. We've got to get back to standing for something, or what are we doing here?" In her recent New York Times profile of Stupak, Jodi Kantor wrote that "the congressman described years of feeling ignored, slighted or marginalized by his party for his anti-abortion views" -- but lately, that's been changing. Sixty-four Democrats supported his amendment to the healthcare reform bill. As Stupak told Kantor, "We're not overlooked anymore."

Back in November, Frances Kissling reminded Salon readers how we ended up here. After the Democrats got wasted in the 2004 election,

Howard Dean, then party chair, initiated an outreach plan to integrate anti-choice Democrats into the party. In fact, they were able to hold their press conferences in the Democratic National Committee building. Democrats for Life has proved to be radically antiabortion, and its members have been congressional ringleaders of the effort to exclude abortion coverage in health insurance reform. The party stopped calling them anti-choice and adopted the language they preferred, "pro-life." In many ways, the message was sent that being pro-choice and antiabortion were equivalent, morally and politically. Deeply held beliefs were not to be critiqued, they were simply to be accepted so that Democrats would be seen as sensitive to religious values.

That story of how the Democratic Party sold out women's health and privacy to regain power goes on -- and on -- if you can stomach it. And regrettably, it worked. For a while, voters were so dazzled by the prospect of a Democratic majority -- not considering just how meaningless that would turn out to be in some crucial respects -- we let it happen. But could we please not fall for it again in 2010, folks? Oh, I know, I know, I'm just acting like a hysterical single-issue voter, but may I remind you that Bart Stupak is willing to stop millions of Americans from getting affordable healthcare without abortion restrictions "as a straightforward matter of Roman Catholic faith," in Kantor's words? (His support of the death penalty is a somewhat less straightforward matter, I guess.) Can we not see an issue there beyond abortion? Have you read that Jeff Sharlet article on "The Family's" efforts to install a "God-led government" yet? Read it again. If I'm stuck on a single issue, it's not my pro-choice stance so much as my anti-theocracy one.

As far as I'm concerned, it's long past time to bring back the good old days of ignoring, slighting, marginalizing, overlooking, excluding, critiquing and, above all, not voting for anti-choice Democrats. Before Chris Van Hollen gets on the horn with Stupak again, he might want to take another look at the party platform, specifically the part that reads, "The Democratic Party strongly and unequivocally supports Roe v. Wade and a woman's right to choose a safe and legal abortion, regardless of ability to pay, and we oppose any and all efforts to weaken or undermine that right." I'm not saying all Democratic representatives need to think and vote in lockstep, but come the hell on. If you're going to stock the party with anti-choicers and religious zealots to manufacture the illusion of a Democratic majority, you might as well be honest and take that sentence out. Or at least add another clause like, "in theory" or "sort of" or "and by 'strongly and unequivocally,' we mean 'unless it's determined that screwing over women is in our best interest -- what are they gonna do, vote for Republicans, lol?'"

At this point, what would be the difference for those of us who really do "oppose any and all efforts to weaken or undermine" reproductive rights? NARAL Pro-Choice New York's Samantha Levine said in an e-mail today that the organization "would caution the Democratic Party against moving so far to the right that they alienate women. The Democrats used to represent our pro-choice values, and Stupak's effort to throw women under the bus is entirely contrary to those values. It's simply not acceptable." People more concerned with a Democratic majority than women's health have cheerfully told NARAL to shut up in the past, but as a plain old citizen, I'd caution the party against underestimating how much the Stupak-Pitts amendment has radicalized pro-choice voters. As blogger and activist Pamela Merritt said when asked to nominate a female "person of the year," "there is a huge part of me that thinks the woman of the year is the re-awakened feminist -- the women who pulled together in coalition to protest Stupak and defeat Nelson, the women who are now organized to demand reproductive justice in a way that has never happened before."

I don't know how many of those women there are, but I know I'm one of them. Anti-choice Democrats will not get my vote, and the party will not get a dime of my money as long as it could help a candidate who doesn't trust grown women to make their own medical decisions. As for the prospect of seeing a Democratic Party that won't stand up for women defeated in the next election, well, I feel the same way about that as Stupak told Kantor he feels about the healthcare reform bill: "It's not the end of the world if it goes down. Then you get the message."