Disaster expert: Why it's so bad

Are famine, disease and looting big concerns? Surprisingly, no. But there's plenty more to make this picture bleak 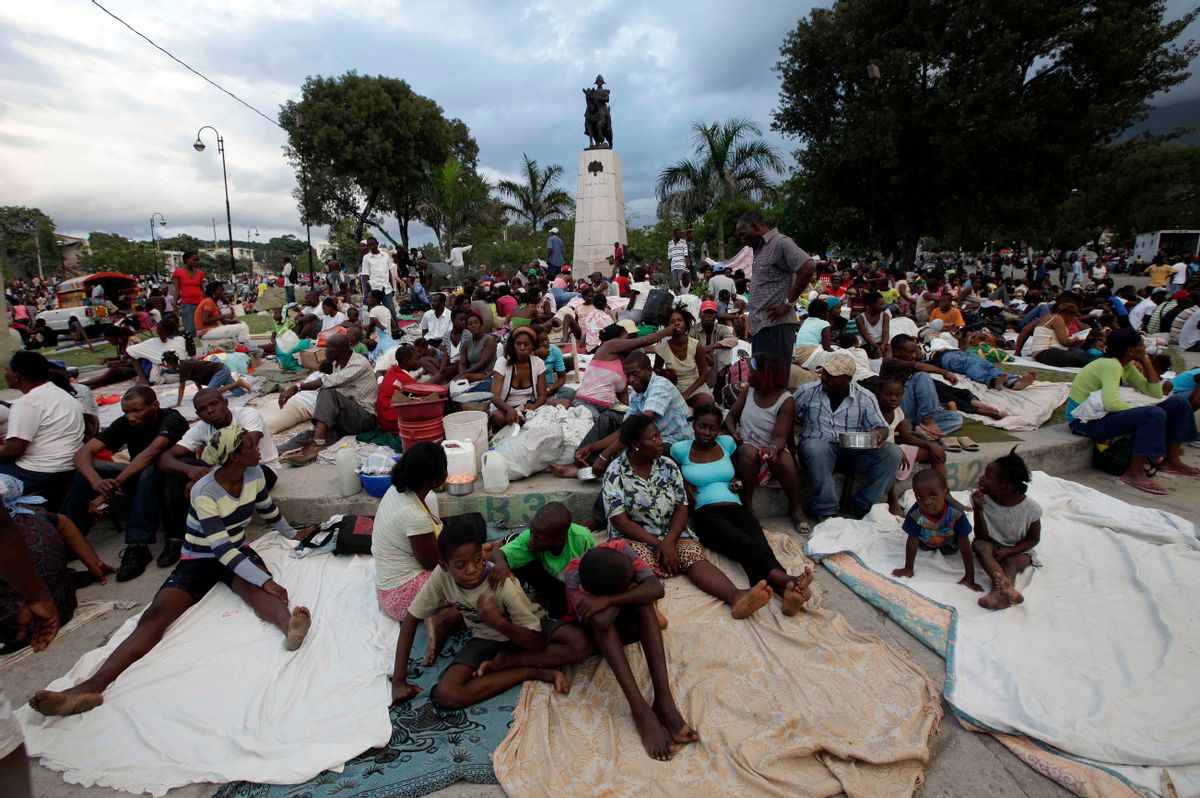 People sit at a park a day after the destructive earthquake in downtown Port-au-Prince, Wednesday, Jan. 13, 2010. The 7.0-magnitude earthquake that hit Haiti on Tuesday flattened the president's palace, the cathedral, hospitals, schools, the main prison and whole neighborhoods. (AP Photo/Gregory Bull) (Associated Press)
--

Earthquakes can be deadly even in the most developed parts of the world. But Haiti's earthquake took place amid extreme poverty in a country with shoddy infrastructure, two factors that will undoubtedly have considerable impact on the tragedy's scope. Salon spoke to Ben Wisner, a retired geography professor and research fellow at Oberlin College who has done extensive work about disaster vulnerability, to find out more about the particular challenges facing Haiti's recovery efforts. He responded via e-mail.

What are some of the biggest misconceptions about disasters -- and recovery efforts?

Food stocks and agricultural land are not as heavily affected in an earthquake as in some other hazard impacts such as flooding or tsunamis. Getting food stocks out of collapsed homes, shops and warehouses and the logistics of moving them around will be a challenge, of course. Farmers in the hinterland of Port-au-Prince and elsewhere in Haiti will be able to carry on farming, although farm-to-market transport will probably be an obstacle at first. So "famine" is not associated with earthquake. WFP [the United Nations World Food Program] has high-energy foodstuffs on hand and is sending more. There are stockpiles in situ and in El Salvador and Panama.

Secondly, epidemic disease is rarely associated with earthquakes. Dead bodies are not a danger to public health, and hasty, mass burial, which is very common, disrupts social closure: Appropriate religious rituals of burial may be neglected, death certificates not issued, and then survivors suffer more difficulties in psycho-social recovery and have problems over inheritance, pensions, etc.

Thirdly, people generally don't panic, and looting is not as common as sometimes people think. On the whole there is a good deal of neighborhood solidarity and mutual aid. Self-provisioning to meet basic needs (see my comments on food above) are sometimes mistaken or misrepresented as "looting." This was big mistake by the media covering Hurricane Katrina, for example.

What makes some people or groups more vulnerable to disaster than others?

Economic and political power, and access to resources, are probably the most important general variables. On the whole, marginal people get allocated by society to marginal places: flood plains, steep slopes and gullies in cities, for example. Social and cultural exclusion and stigma may also come into play, and their effects overlap with differences in economic and political access. So, low-caste people in India, women in many cultures, people living with disabilities, mental illness, etc., may all be more vulnerable than others. Vulnerability involves not only the likelihood of death or injury, but the degree of difficulty in recovery, especially rebuilding of livelihoods (see comments above about loss of assets). Studies of recovery after cyclones in South Asia show that although richer fishers have more to lose, they rebuild their assets faster.

The book you've co-authored, "At Risk," mentions that disasters should be considered within their social context -- not necessarily as a natural event. What does that mean?

Disasters occur when a vulnerable population is exposed to an extreme natural event. Thus "natural disaster" is a misnomer. Only the hazards are natural. So the rest is social. What does that mean? People don't engage with nature directly the way animals do, but socially. Nature thus becomes "environment" and a matter of land use and natural resource management. How environment is managed, what gets built, how land is used, etc., is all determined by economic and political factors. Taken all together, I refer to these as "social."

Likewise, people's ability to protect themselves is affected by the way society is organized. For the poor, social capital and mutual aid might substitute to some extent for social protection by the government -- via daycare, good, safe schools, etc. -- but only up to a point. The baseline health of people and their "normal" access to health facilities and other infrastructure affects the degree to which they are resilient after a disaster. Simple example: Roads that allow the entry to fire and emergency vehicles are vital after urban disasters. In normal times they also are safer for pedestrians and facilitate marketing and trade. Absent such roads -- in informal urban settlements -- the impact of disasters is magnified.

How do other earthquakes that you've considered or written about compare to this one?

We don't have assessments yet, but the physical parameters -- magnitude, shallowness, proximity to a very large and very poor city -- suggest that very heavy loss of life is to be expected. It's also likely that there have been landslides outside the city that will only be reported in a few days when assessment teams arrive. While not as dramatic and widespread as the Sichuan earthquake in China and the earthquake in the Pakistan, the combination of landslides and heavy urban damage is similar.

I visited Sichuan six months after that quake in 2008. The urban damage I saw looked quite similar to images I have been seeing from Haiti. However, government responses in Pakistan and China were strong and swift. Perhaps the best comparison is the Mexico City earthquake in 1985 that killed perhaps 16,000 people. The Mexican government was paralyzed and did very little. It is generally believe that loss of credibility by the Mexican government due to this failure to attend the disaster was the beginning of the end of the dominant PRI party that dominated politics there for 70 years. The political fallout of this earthquake may be serious in Haiti.

What's the most effective way to deal with a disaster like this, in a severely poor area that has only minimal infrastructure?

The U.N. and major INGOs today operate a cluster system that maximizes cooperation and coordination in various emergency functions: search and rescue, water supply and sanitation, food, shelter, temporary education and protection of children. Also there are good regional organizations for cooperation in disaster in the Caribbean and in Central America. Cuba, Mexico, the U.S. all have good expertise and resources. There are stockpiles in a number of countries. Panama City is a regional hub for many international organizations. So immediate response and what is known in U.N. circles as "early recovery" will probably roll out smoothly.

What will be prolonged and difficult is the reconstruction and recovery process. The challenge is to make more of the phrase "build back better" (attributed to Bill Clinton commenting on the Asian tsunami). Schools, hospitals, government buildings, etc., have to be built back to a high safety standard. Ditto bridges and other lifeline infrastructure. Planning needs to take multiple hazards into account and mainstream considerations of them into all economic and social planning.

It's likely that because of Haiti's history of hurricanes, landslides and floods, not enough attention has been paid to seismic safety. A recent earthquake in Malawi, at the end of the Great Rift Valley, shows that one can never focus on single hazards (in that part of the world the cycle of drought and flood), but take a multi-hazard planning approach. However, this requires good government. The long history of aid dependence, corruption and political (even violent) conflict in Haiti suggests that major political changes are required as a precondition for this kind of planning. But it is possible. Bangladesh is doing a good job of it, as is El Salvador, Cuba, South Africa, some Indian states. So it's possible.