"The Book of Eli": Read it and weep 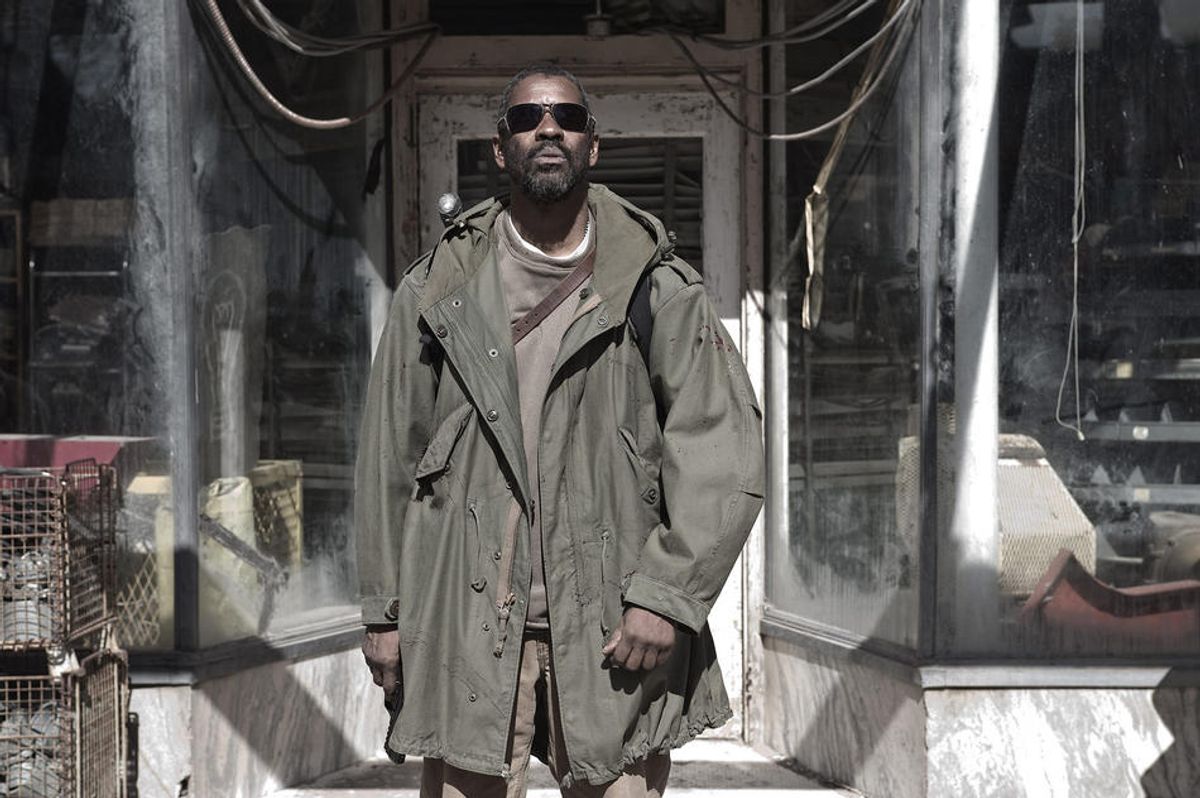 Denzel Washington in "The Book of Eli."
--

"The Book of Eli" is one of those post-apocalyptic action movies that nimbly straddles the line between being dour and ridiculous: It's the first movie the Hughes Brothers (Albert and Allen) have directed since 2001, when they adapted Alan Moore and Eddie Campbell's Jack the Ripper fantasy "From Hell," and in theory, at least, it's not such a vast leap away. The filmmakers are once again going for atmosphere here, working hard to build a sense of place and mood. Denzel Washington is Eli, the principled survivor of a catastrophic war, one that has made some citizens marauding, plundering cannibals, turned others into blind, cowering weaklings and has inspired an enterprising few -- like Gary Oldman's Carnegie -- to become dictators-in-training. Eli, you see, is carrying the very last Bible in existence; he reads it faithfully every night and guards it with his life -- his aim is to keep heading "west," where he somehow believes the Good Word may actually be able to do some good. Meanwhile, the evil Carnegie, who's taken over a godforsaken town that looks like an abandoned set from a Sam Peckinpah movie, has been desperately trying to get his hands on one of them-thar Bible things, believing the humble words contained therein will be his key to complete control of the human beings in his dominion. In other words, he plans to twist the word of God so it can be used for evil, not good, and we all know that never happens in real life.

But that's where the significant symbolism of "The Book of Eli" -- which was written by Gary Whitta -- begins and ends. Eli makes his way through this troubled futureville landscape, shooting and eating cats to survive (more on this later); he avoids evildoers when he can but doesn't hesitate to use a handy multipurpose cutting tool (plus a bow-and-arrow) to lop off limbs and pierce sternums when necessary. In other words, this supposedly deeply spiritual journey is really mostly about kicking ass.

Movie lore is filled with righteous heroes and antiheroes who use the word of God either as a warped justification for their actions or as a salve to help them cope with the evil deeds they must commit to survive. Washington's Eli falls pretty much into the latter category, although that doesn't stop him from slicing-and-dicing a whole saloon's worth of baddies when the occasion calls for it. Eli is really just a wanderer -- for a time, he's lucky enough to have a pretty young companion named Solara (Mila Kunis), who's escaped from Carnegie's clutches. Together they drift through this glum landscape, all gray desert and khaki clouds: The movie was shot by Don Burgess in those desaturated, not-quite-sepia, not-quite-black-and-white tones that have become de rigueur for movies set in the grim near-future. (Someone should trademark the process, fast, under the name Apocalypticolor.)

"The Book of Eli" is somewhat entertaining, in its own little mud-brown way. And while it bears a passing resemblance to John Hillcoat's brooding adaptation of Cormac McCarthy's "The Road" -- another movie that's heavy on futuristic cannibals -- "The Book of Eli" isn't a heavy-duty downer. Washington is pretty good at playing the noble warrior, although he's even better when he settles down and opens his precious book for inspiration: When he reads the words, aloud, he's tuned in to their sometimes harsh, sometimes radiant poetry -- his melodic intonation qualifies as a kind of hypnotism. And even if the movie does take place in a grim futureworld, it isn't completely joyless: At one point Eli and Solara encounter an elderly couple, played by Michael Gambon and Frances de la Tour, who welcome the wanderers into their remarkably well-preserved farmhouse for a spot of tea. The woman asks them if they'd like to hear a little music -- "It's so soothing!" she coos -- and when they agree, hesitantly, Gambon cranks up an old victrola and the crackly strains of Anita Ward's "Ring My Bell" fill the air. (Wait a minute -- was this thing directed by the Hughes Brothers, or the Hues Corporation?)

But sometimes the Hughes Brothers seem to be going for laughs in the wrong places. Cat lovers might want to know that in the film's early moments, Eli shoots, roasts and eats a hairless cat. While you could argue that Eli needs to eat the cat to survive, in a later scene he bullies -- although, thankfully, doesn't eat -- a curious and presumably harmless Persian cat. The incident is brief and mostly dumb, but it also seems to stem from the lugnut idea that it's somehow "manly" to dislike cats.

Something tells me Jesus would have no truck with that idea, but never mind. The Hughes Brothers may want us to think they're giving us a few deep, quasi-spiritual ideas, but what they're really serving up is earnestly shallow, machete-and-bow-and-arrow entertainment. They're clearly motivated by one central question, and it's not "What Would Jesus Do?" More like "What Would Make Jesus Buy a Ticket?"