Jackie Chan plays a hapless baby sitter in this antic kids' comedy. Where's the comic role that will let him shine? 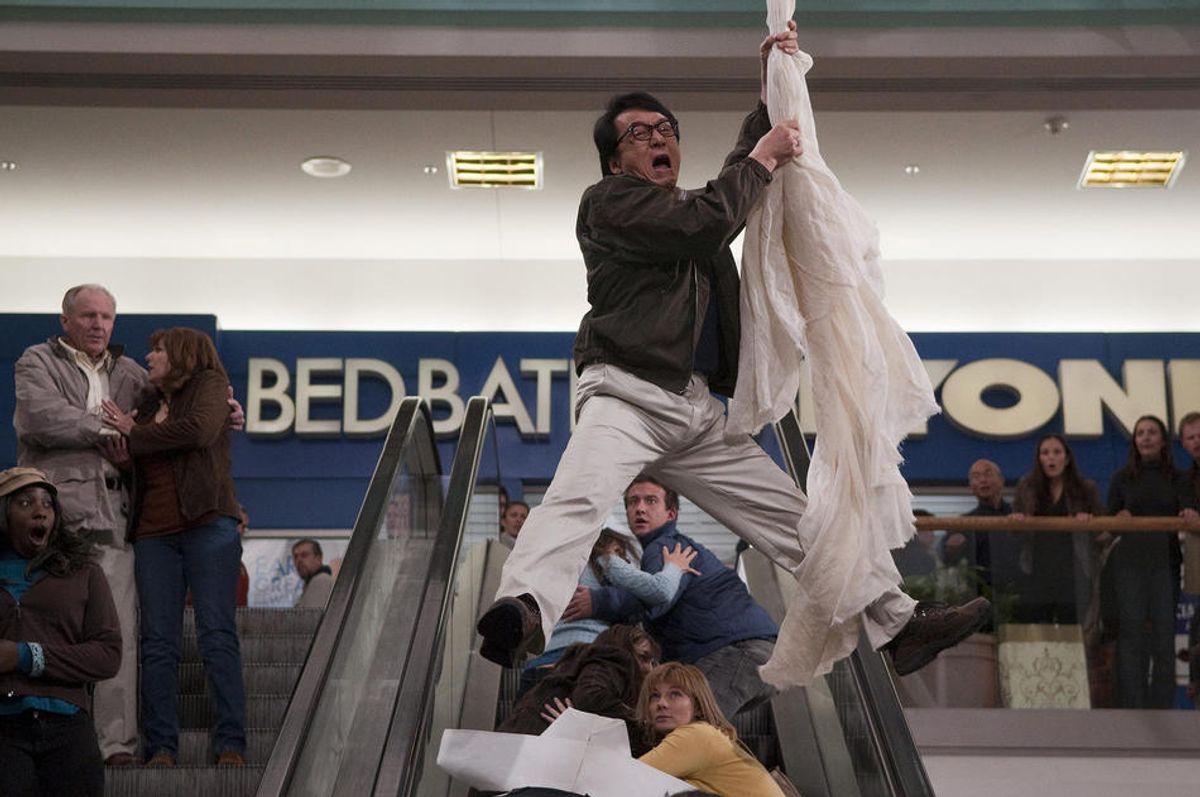 There's something quaintly appealing about the idea, at least, behind the Jackie Chan vehicle "The Spy Next Door," a movie that would have been called, in more innocent times, "kiddie fare." Before movies like "Shrek" ushered in an era of hip, culturally aware humor -- often targeted more toward adults than children -- there were lots and lots of kids' movies in which adults were bossy and youngsters were misunderstood, someone would usually make a mess in the kitchen (it could be a hapless grown-up or a mischievous kid), and people would fall down a lot. "The Spy Next Door" -- which was directed by Brian Levant, whose credits include the 2005 Ice Cube family comedy "Are We There Yet" and the 1994 "The Flintstones" -- contains most, if not all, of those elements. It also has the Chan advantage: Even though the 55-year-old actor has had to slow down considerably in terms of performing crazy stunts (and, as much fun as Chan was to watch in the old days, I say thank God for that), he's still a comic actor of considerable charm and almost criminal likability.

But Levant and the writers here (Jonathan Bernstein, James Greer and Gregory Poirier, working from a story by Bernstein and Greer) don't know how to use Chan to his best advantage. They're not alone in that. Even though Chan has been extremely enjoyable in some of his more recent American movies, like Brett Ratner's super-ridiculous "Rush Hour 3," nobody really knows how to write a part for him. The Chinese cowboy he played in the dual delights "Shanghai Noon" and "Shanghai Knights" may have been the best role he's had in the past 10 years or so, helped along by the fact that he and Owen Wilson have a marvelous, oddball chemistry together: Somehow, Chan's halting, tentative English finds its perfect match in Wilson's laid-back drawl -- it's as if the two have invented some new, interplanetary language.

But "The Spy Next Door" seems to constrict Chan more than it frees him. The plot is simple: Chan plays Bob Ho, a CIA spy who's anxious to retire and settle down. Having reinvented himself as a bespectacled sweetie-pie, he's been dating his exceedingly attractive next-door neighbor Gillian (the appealing, low-key Amber Valletta) for several months, and he wants to marry her. The problem is that her three kids, bratty preteen Farren, smart-alecky computer-whiz Ian and pink-obsessed preschooler Nora (played, respectively, by Madeline Carroll, Will Shadley and Alina Foley), just don't like him. They know nothing of his groovy spy background and merely think he's robotic and dull. When Bob suddenly gets the chance to look after them for a few days, he jumps at the chance to win them over, not knowing that a bunch of Russian bad guys (led by Magnus Sheving) that he thought he'd thwarted have resurfaced to make his life h-e-double-toothpick.

The story offers plenty of opportunities for antic silliness. Bob, failing to impress the kids with his nonexistent caretaking skills (he practically burns the kitchen down making their breakfast on the first day), finally gets wise and employs an assortment of spy gadgets to help keep his charges in line. (He puts a tracking device on the little one, handy for locating her when she runs away from him in the mall.) As Bob wins the kids over and fends off the Russians, Chan pulls off a number of pratfalls and somersaults, and he's still capable of some pretty agile jumping and twisting.

But, of course, the stunts aren't the point here: Chan's strong suit now is his skill as a comic actor, and Levant and his writers don't know how to tap it. "The Spy Next Door" moves from one feeble gag to the next; it's barely 90 minutes long, but the story drags interminably. I couldn't wait for the outtakes typically included at the end of Chan's movies. They didn't disappoint, but they still seemed like a meager reward.

Chan needs a partner to spar with and bounce off of -- even Chris Tucker will do in a pinch -- and "The Spy Next Door" leaves him adrift, grinning and nodding. He deserves, and needs, more to do. Chan gets his best moment when he's trying to get the littlest squirt to go to sleep and keeps messing up the words to "Rock-a-bye Baby." He scraps the whole thing and begins crooning a Chinese lullaby instead. The sudden softness of his voice -- maybe it's the sound of not trying too hard -- changes the tenor of the scene and, for just a few moments, elevates the tone of the movie. There's nothing wrong with Chan's making a silly comedy for kids. But he's got more in him than grinning, nodding and falling down a lot. All he needs is a filmmaker who's ready to let him to make that leap.