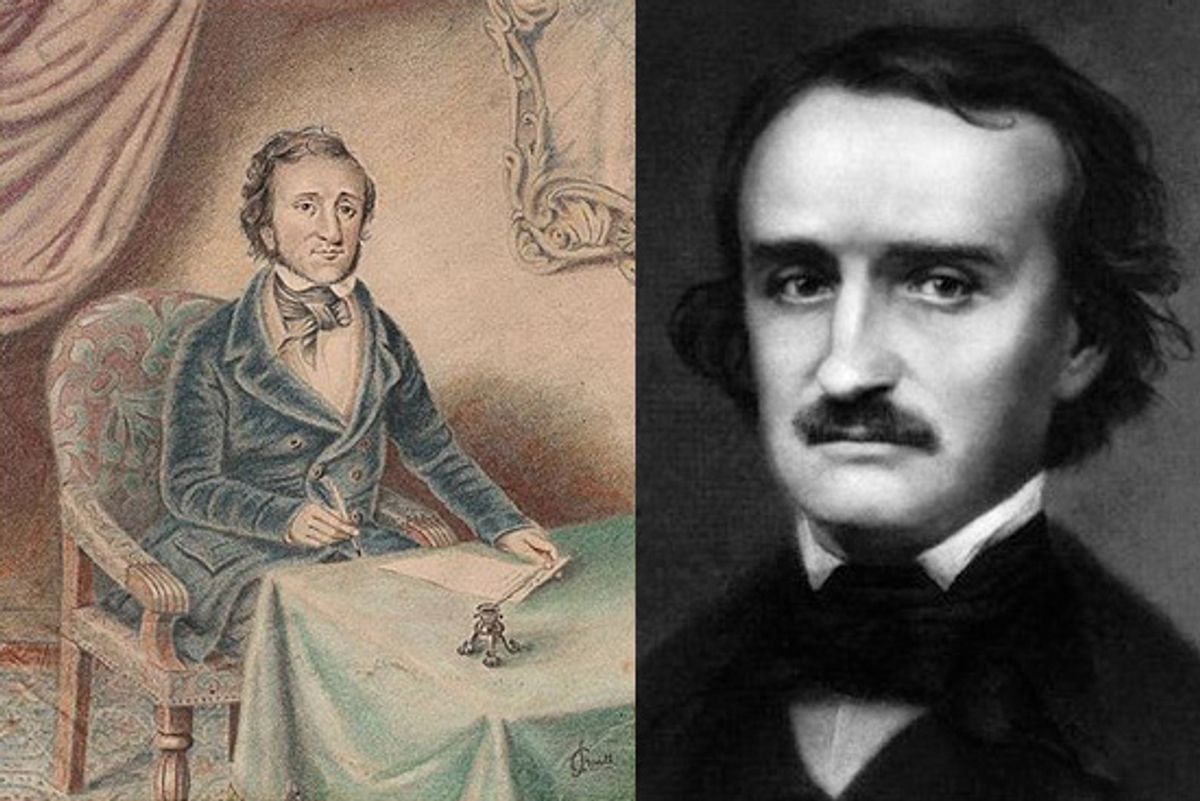 Edgar Allan Poe's fertile imagination has endured for more than 150 years -- and so has his pale, death-haunted image, with his sunken eyes, a trim mustache and unruly mop of curly hair.

However, scholars say Poe looked far more vigorous, perhaps even dashing, in his earlier years than he does in the well-known series of daguerreotypes taken in the final years of his life.

The more robust Poe is captured in a small watercolor by A.C. Smith, one of just three surviving portraits of the author, which will be shown publicly for the first time Saturday and is expected to fetch tens of thousands of dollars at auction.

Poe sits at a desk with pen and paper in hand, seemingly at the height of his creative powers. His upper lip is clean-shaven, though he sports long, bushy sideburns. And there's the slightest hint of a smile on his face.

"It actually represents Poe as he appeared to his contemporaries -- a handsome, sophisticated young man on the rise," said Cliff Krainik, the owner of the portrait and a Poe scholar. "The daguerreotypes show him in his rather dissipated state, where he has gone through the difficulties of his life."

While the portrait has been authenticated, much of its history remains unknown, the details of its creation a mystery that even Poe's famed detective, C. Auguste Dupin, would have trouble unearthing.

This much is certain: Smith was a miniaturist who worked at various times in Philadelphia and Baltimore, cities where Poe also lived, and Poe sat for the watercolor in 1843 or 1844 -- five or six years before his death.

Smith drew another sketch of Poe around the same time that served as a model for an engraving that was printed in Graham's Magazine in 1845.

It is unclear what Poe thought of the finished watercolor -- though he was not fond of Smith's sketch. In 1844, he wrote to James Russell Lowell, "You inquire about my own portrait. It has been done for some time now -- but is better as an engraving, than a portrait. It scarcely resembles me at all."

It's unknown who paid the artist, and the painting's whereabouts before 1978 are unknown. That's when Krainik bought the portrait from a collector's vast estate in Charlottesville, Va. He knew immediately that it was Poe and paid only a few dollars for it, he said.

"I knew it was of historic importance," Krainik said. "I didn't think of it like, 'This is a steal.'"

Beyond the watercolor and sketch by Smith, the only other extant portrait is a painting by Samuel Osgood that hangs at the National Portrait Gallery in Washington, D.C. A portrait by James McDougal is lost.

Now, Krainik plans to sell the Smith portrait at auction, and he's picked an auspicious time. A rare copy of Poe's first book, "Tamerlane and Other Poems," sold in December for $662,500, a record for American literature.

Before the auction, scheduled for June at Cowan's Auctions in Cincinnati, the portrait will be unveiled in conjunction with Poe's birthday celebration in Baltimore. Tuesday is the 201st anniversary of Poe's birth, and the portrait will be on display Saturday and Sunday at Westminster Hall, the former church adjacent to Poe's grave.

Krainik claims money is not his goal in unveiling the portrait, but auctioneer Wes Cowan said he expects it will sell for at least $30,000 and perhaps more than $50,000.

"This is the only portrait of Poe that shows him in his occupation," said Cowan, who also is an appraiser on PBS' "Antiques Roadshow." "It's an exceptional image."