Donny Deutsch, Peggy Noonan and Mike Barnicle go gaga over Scott Brown, who "looks like an American." All of him 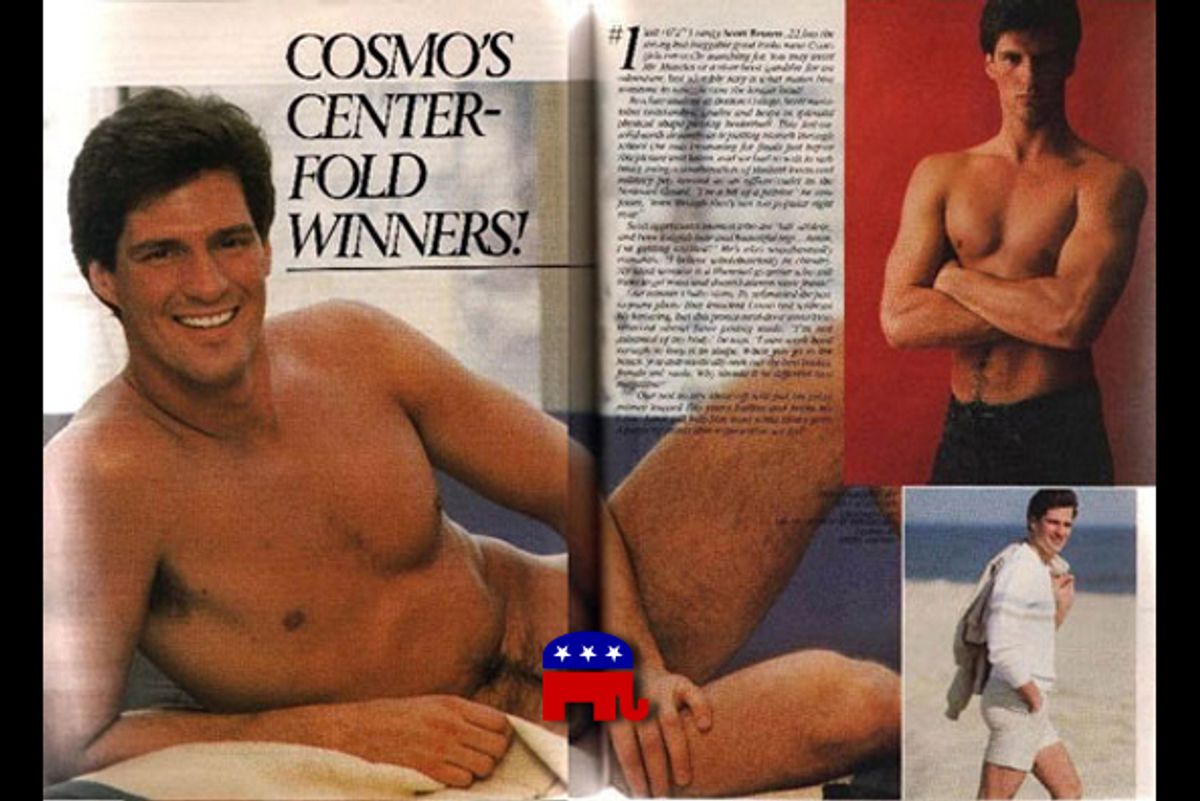 Just when I'm trying to stay focused on the issues behind Massachusetts Republican Scott Brown's likely victory over Attorney General Martha Coakley in today's race to succeed Sen. Ted Kennedy, Donny Deutsch, Mike Barnicle and Peggy Noonan showed up to remind me of the ugly intangibles behind the race. On "Morning Joe" this morning they chatted about one of Brown's primary assets: In Noonan's words, Brown "looks like an American."

Donny Deutsch led off. "It's interesting, we've obviously had our first African-American president, we've had the female candidates and whatnot," Deutsch opined. "You look at him, and he looks like the real candidate, the traditional candidate. And is there a visceral comfort in that to people? I'm just curious." You tell us, Donny.

Mike Barnicle threw in his trademark sexism: "He looks like the high school football coach, who everybody knows, and he's running against the substitute teacher who takes no interest in her classroom students." (Yes, just the way Hillary Clinton reminded every man of his first wife. Stay classy, Mike Barnicle!)  Peggy Noonan greeted that with a loopy "Ha ha ha ha!" I kid you not, watch below.

Then Noonan let loose: "There's something else going on. He's a sort of a new sort of a Republican. Old style was a Boston Brahmin liberal Republican ... This is something new now: He's a regular guy, looks like an American, from the middle or self-made into a middle-, upper-middle-class guy. We're seeing an evolution of what a Republican is now."

OK, got it. He looks like a traditional candidate, the high school football coach, like an American. And, um, who doesn't? Obviously Martha Coakley, but it's pretty hard not to think of, what's his name. Barack Obama. Watch the video:

Now, I think Brown has surged ahead largely because Coakley's run a lousy front-runner's campaign. I also think there's some evidence that Americans either don't support or don't understand what the Democratic Party is up to. I can't blame them. They've sold healthcare poorly (and crafted a bill that makes both left and right angry). Obama banked on bipartisanship, and handed the issue over to the conservative Senate Finance Committee, making the process of crafting a bill longer than it should have been, and getting zero Republican support in the end. And while Obama is given credit, by people who know about the issue, for bringing the banking industry back from collapse, he also gave its leaders far too much power in his administration, making him look like the buddy of fat cats on Wall Street and not the unemployed. All that is true.

But something else is also true: Scott Brown is riding a wave of discomfort with big change in our society and in Washington -- not only with big government, but with exactly who runs big government. The influence of the tea partiers and the GOP fringe on Brown's success can't be overstated. In the Washington Independent David Weigel quoted a phone-banker who had a dreamy Brown supporter tell her the GOP insurgent was "the white Obama." Ah, so that's what we need, a white Obama?

As Noonan, Deutsch and Barnicle went on and on about Brown's appeal as a "traditional candidate" and high school football coach, I couldn't help thinking about his centerfold in Cosmopolitan. Now, I like beefcake as much as the next gal, and I'm happy to let the GOP be the party of sexual Puritanism. I still have to say: No female candidate would ever survive a race for Senate with a photo spread like that in her past. It's unthinkable. The double standard is appalling.

But then it's always been clear there are different standards for a guy who "looks like an American."