Nearly calorie and carb free, they may actually help you lose weight. But will shirataki noodles last? 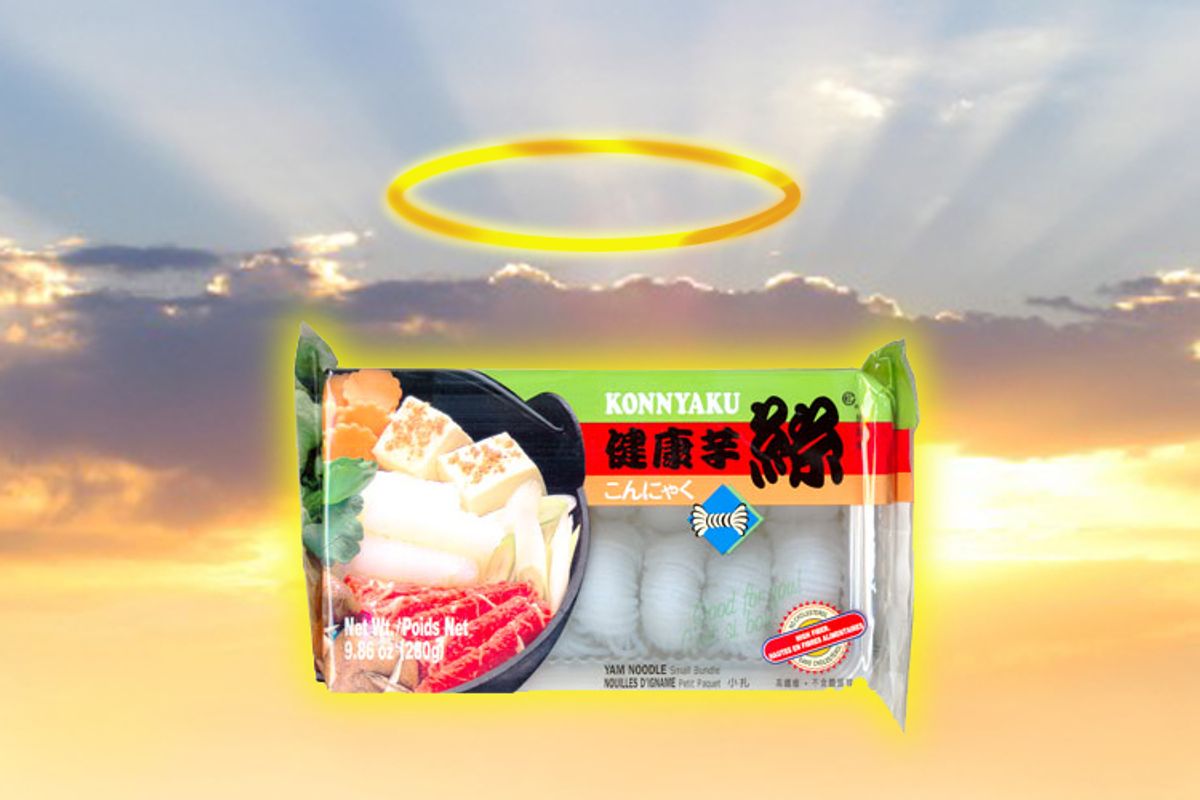 For dieters, it’s the ultimate dream: a food that’s nearly calorie-free, filling to eat and ridiculously easy to make. The shirataki noodle, a product that’s recently been gaining notoriety, is being advertised as just that. Made from the plant fiber of the konjac plant (more dramatically known as "devil’s tongue"), an Asian species that looks like a casually misplaced elephant tusk, the thin, nearly transparent noodle’s main ingredients are water and a dietary fiber called glucomannan. The noodles are incredibly low in carbohydrates and calories, and studies have found that glucomannan helps reduce cholesterol and can aid weight loss. They have almost no flavor (but will absorb flavors from sauces or soups), have a texture like firm, springy gelatin, and cook almost instantly.

Where does it come from?

Shirataki noodles come from Asia, where they’ve long been popular in China and Japan, where they're often eaten like sashimi, in slices. They’ve also been available in Asian specialty stores in the United States, but more recently, a modestly titled company, Miracle Noodle ("like Dustin Hoffman in ‘Rain Man’ was with numbers, we are with noodles"), has begun selling them online. Miracle Noodle offers shirataki in several shapes, including angel hair, fettuccine and rigatoni (the angel hair is kosher). They’re also on sale at some more conventional grocery stores, including Trader Joe’s and Safeway.

While they been known in the United States among dieters for years (there are YouTube recipe videos dating back to at least 2007) the noodles were featured in Men’s Health magazine in 2008, citing a study claiming that the noodles help prevent fat storage, and they have even popped up on local newscasts. But the noodles finally hit it big earlier this month, when Rocco DiSpirito included them as one of his "must-try" foods for 2010 on the Rachael Ray show, catapulting "shirataki" into Google’s hot top-10 search trends.

Aside from Rocco DiSpirito, the noodles are popular in the Asian community, dieters and, based on YouTube, a cross-section of folks looking for a quick, healthy, labor-unintensive meal and a second career as an online cooking show host.

It’s hard to imagine that a tasteless calorie-free noodle holds much appeal for people beyond those who are watching their weight, consciously thinking about their health, or suffering a disastrous aversion to flavor — but its long popularity in Asia suggests that's there's more to this noodle than meets your taste buds.