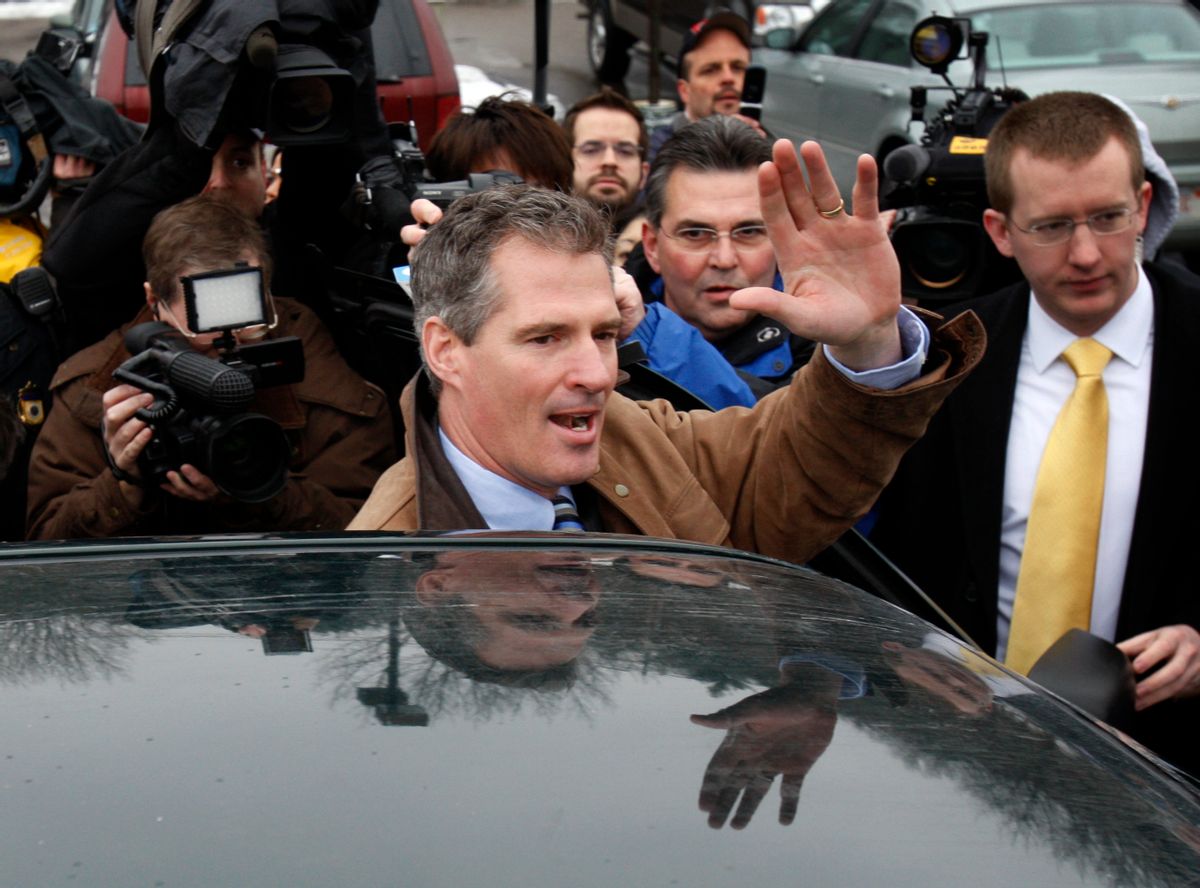 11:10 p.m. EST: Scott Brown has taken what was, to say the least, a very unorthodox sort of victory lap. He did have prepared remarks, complete with all the messages you'd expect from a Republican who'd won this sort of race this year, and for the most part he stuck to them. But even when he did stick to those remarks, he still managed to seem as if he was rambling way off-text, turning the whole thing into what seemed to be a weird sort of stream-of-consciousness session.

There was one portion, though, that was definitely not in Brown's prepared text: In referring to his daughters, who were on stage with him, he said that if anyone watching was wondering, "yes, they're both available." As if that weren't enough, considering how mortified both of them looked, he amended to say that one is in fact available and one isn't, and he was specific about it.

That bit was obviously an odder, flatter moment for Brown, but there was still plnety of red meat in the speech for the conservatives who'd turned out to celebrate his win. He made fun of President Obama's love of basketball, referred back to his pickup truck and went to some familiar Republican talking points about the issue on which he may make the most difference, healthcare reform.

"When in Washington, I will work in the Senate with Democrats and Republicans to reform health care in an open and honest way. No more closed-door meetings or back room deals by an out of touch party leadership. No more hiding costs, concealing taxes, collaborating with special interests, and leaving more trillions in debt for our children to pay," he said.

Brown's audience seeemed to care most of all about the "when" part of that "When in Washington" phrase; they repeatedly chanted slogans having to do with rumors on the right that Democrats will attempt to delay seating the new senator until after healthcare reform is passed. For the record, those rumors seem unfounded -- in a statement released Tuesday night, Senate Majority Leader Harry Reid said, "We welcome Scott Brown to the Senate and will move to seat him as soon as the proper paperwork has been received."

Even if Democrats relied on the most favorable interpretation of that, given the pace at which work on the legislation has gone, it seems all but impossible they could get anything done in time.

The President thanked Attorney General Coakley for her hard work and urged her to continue her advocacy on behalf of working people.

10:00 p.m. EST: This isn't the kind of thing that the White House, or Democratic congressional leaders, want to hear right now. From Sen. Jim Webb, D-Va., in a statement:

I congratulate Scott Brown on his victory, and I look forward to working with him in the United States Senate.

In many ways the campaign in Massachusetts became a referendum not only on health care reform but also on the openness and integrity of our government process. It is vital that we restore the respect of the American people in our system of government and in our leaders. To that end, I believe it would only be fair and prudent that we suspend further votes on health care legislation until Senator-elect Brown is seated.

Now, it should be noted that the Senate was unlikely to have any more votes on healthcare before Brown is seated anyway, as the House needs to vote first. This would have been more consequential if Webb had been calling for the House to hold off on further votes as well, but a spokeswoman for the senator tells Salon he was referring only to the Senate.

9:45 p.m. EST: Democrats are in for a world of hurt over the next couple news cycles at least. So the Democratic National Committee and its chair, former Virginia Gov. Tim Kaine, came out with a statement very soon after Brown was declared the victory, perhaps hoping to get out ahead of the worst of it.

I want to congratulate Scott Brown on running a strong campaign and Martha Coakley on being a strong voice for progressive values.

It goes without saying that we are disappointed in tonight's result. There will be plenty of time to dissect this race and to apply the lessons learned from it those to come this fall -- but in the meantime we will continue to work tirelessly on behalf of the America people and we will redouble our efforts to lay out a clear choice for voters this November.

I want to thank our state parties and our DNC and Organizing for America staff and volunteers all across the country who have worked tirelessly on this campaign and who will continue to support President Obama and work for the change we all believe is essential to getting our nation moving in the right direction again.

On the other side of things, there's the perspective of House Minority Leader John Boehner, who's casting Coakley's loss as reason for Democrats to give up on their plans for healthcare reform. His statement:

I want to congratulate Scott Brown on an important win tonight. Scott's victory is a clear sign that voters are screaming "STOP" at the Democrats' jobs-killing agenda -- even in the bluest of blue states.

While Democratic leaders may be tempted to quickly ram their government takeover of health care down America's throat, they should take Scott's victory as an opportunity to scrap their bill, start over, and start working with Republicans on the issues that matter to American families -- especially jobs and our struggling economy.

One year after President Obama was inaugurated the unemployment rate has soared past the Administration's projections. Americans continue to ask, "where are the jobs?" But all they've gotten from the Democrats who run Washington is "cap and trade," a "stimulus" that isn't working, a record deficit, a health care bill written behind closed doors, and slush funds for politicians.

Republicans have better solutions that will curb spending, cut taxes, help small businesses create new jobs, get control of the debt, and lower health care costs while stopping a government takeover. Out-of-touch Washington Democrats can now do one of two things: work with Republicans to help the country, or keep their heads in the sand and face the consequences this November.

There was already a report of a concession in the special election held Tuesday in Massachusetts to replace Sen. Ted Kennedy, and now the Associated Press has made the call: Republican Scott Brown has completed his unlikely rise and won the race to replace the late Sen. Ted Kennedy.

Even before the AP projection came in, Democrat Martha Coakley reportedly called Brown and conceded that he'd won.