"I just want my country back" 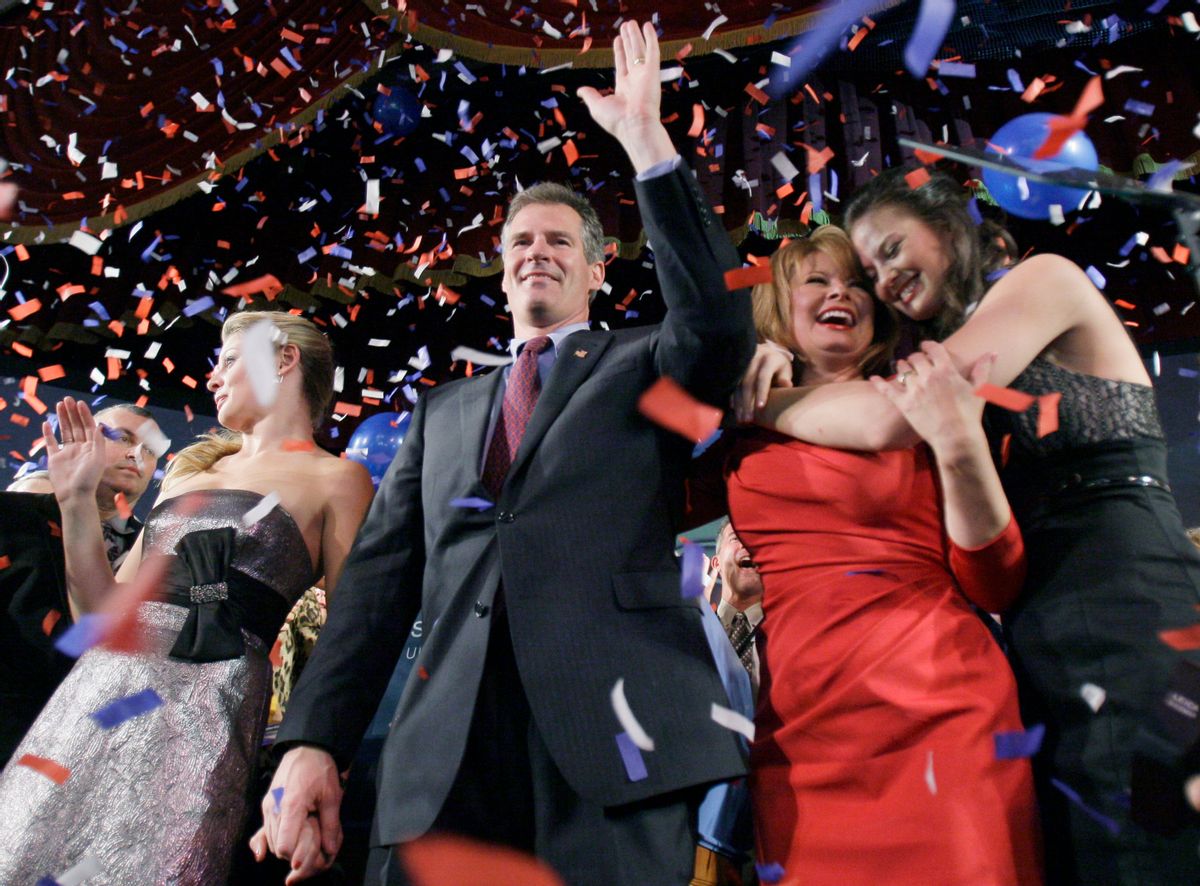 Just when you think you've seen it all, the state that sent and returned Ted Kennedy to the Senate nine times goes and elects as his successor a man whose chief campaign pledge is to block what the late senator called "the cause of my life."

And it wasn't even that close.

Returns from the 352 cities and towns in Massachusetts began trickling in just after 8:00, but already Republican Scott Brown's headquarters -- a mezzanine-level ballroom in a posh Back Bay hotel -- had the feel of victory.

The crowd, perhaps a thousand of them, jostled for standing-room space between the stage and the press risers. Casual conversation was impossible. Onstage, Doug Flutie -- forever a local hero thanks to the immortal 1984 Hail Mary pass that stunned the Miami Hurricanes -- and his band banged out classic rock tunes while the crowd alternately sang along and broke out in chants of "USA!"

A producer for a conservative Boston radio talk show, dispatched to provide field reports, excitedly likened the Brown supporters to baseball fans watching a well-hit ball travel toward the fence, ready to explode in ecstasy the minute it finally leaves the park. In a nearby hallway, a middle-aged man wearing a hard hat and a navy blue Brown for Senate T-shirt (with neon-green long sleeves underneath) urged the revelers to join him in a chant of "Get down with Brown!"

He identified himself as Mike Doherty, a heavy equipment operator from suburban Hanson. "I just want my country back," he said. "I want to see my legislation before my face -- not behind my back."

Like many in the crowd, Doherty called himself an independent (or "unenrolled," the technical term in Massachusetts) and said he'd only recently become involved in politics -- and even more recently with the Brown campaign. "I was tired of watching the liberals run roughshod over all of us," he said.

Doherty's presence, and the presence of a surprising number of other blue-collar and middle-class voters, spoke to a key cog in Brown's winning coalition.

In accumulating more than 1.1 million votes and defeating Martha Coakley by 5 points, he racked up the second-highest share of votes for a Republican Senate or gubernatorial candidate in Massachusetts since 1972. (Only Bill Weld, reelected with 71 percent in 1994, did better.) Returns suggest that Brown's victory was built on the increasingly tax-phobic bedroom community dwellers outside of Routes 128 and 495 (the two interstates that ring Boston) and on working-class voters in and around the state's small and midsize cities -- older, largely white places like Fitchburg and Brockton.

For Democrats outside Massachusetts, who must this fall defend suddenly vulnerable congressional majorities, the challenge now is to figure out how their party -- whose candidate led this race by 30 points just a few weeks ago -- could lose in such a reliably Democratic state. Was it just a complacent candidate who fell asleep at the switch (and then proved disastrously inept when she woke up)? Was it something particular to Massachusetts -- a rejection of the Democratic Party that has dominated Beacon Hill for decades? Or was it worse: an unmistakable sign that the nation's electorate is in revolt against the Democratic Party that now runs Washington.

The answer seems to be all three.

Coakley's inadequacies as a candidate were well-documented in the run-up to Tuesday (and on Tuesday itself, when unnamed Coakley aides and D.C. Democrats used the media to engage in an embarrassing round of preemptive finger-pointing). You know the story by now: She won the four-way December Democratic primary with ease and figured the heavy lifting was over. She took a vacation, pulled her ads and refrained from pressing the flesh. In her defense, she's hardly the first Massachusetts Democrat to do this over the last few decades -- and almost all of them have gone on to win, easily.

But about two weeks ago, the polls showed Brown, a state senator from suburban Wrentham, making it a race. The press began to take notice and coverage of the election spiked -- and in turn, the polls tightened further. Hearing on the news that the contest might not be a foregone conclusion jolted the state's independent voters.

"It was a major opportunity for them to tune in," said David Paleologos, whose Suffolk University poll was the first to pick up on Brown's late surge to the lead. "And usually they don't. This race really attracted an intensity that we don't usually see from them."

Suddenly under the spotlight Coakley melted down. Asked why she hadn't followed her opponent's lead and campaigned outside of a Bruins game at Fenway Park, she was incredulous: Campaign in the cold? An emergency fundraising trip to D.C. proved disastrous when it was reported that the closed-door event was attended by healthcare lobbyists. She seemed to have no clue who Curt Schilling, hero of the 2004 World Series, was. You could feel the state's culturally conservative blue-collar voters abandoning her -- especially when, in trying to appeal to pro-choice women, she suggested that devout Catholics probably shouldn't work in emergency rooms where abortion pills are offered to rape victims.

It's probably true that a different Democratic nominee would have weathered the storm better. In hindsight, this was going to be a closer-than-expected race no matter what. That's what 10 percent unemployment and complete Democratic control of Washington (and Massachusetts) will do. But Mike Capuano, the congressman from working-class Somerville who finished second in the primary, would have been better-suited to keep blue-collar voters from defecting once the spotlight was on. "Capuano," one Bay State Democratic pro argued, "wouldn't have won those voters. But he would have kept it close enough."

But it wasn't just an unfortunate caricature and a series of stumbles that sunk Coakley. This election marked the emergence of an angry, right-leaning breed of independent voters. (In other states, they may actually be Republicans, but a little over 10 percent of the Bay State's electorate is actually registered with the GOP.) They've always been conservative, but until Barack Obama's election, they weren't that vocal.

"We watched what was happening in Washington and just saw this insane spending," Charlotte Mastroianni, a retired nurse who attended the Brown party with her husband, explained. Mastroianni described herself as an independent voter, but said she hadn't been involved in politics for 30 years. But last year, she and her husband joined Glen Beck's 9/12 Project, traveling to Washington for the September rally.

"They're just remarkable, remarkable people. Wonderful people," Mastroianni said of her fellow 9/12 participants. "But unfortunately it got lousy press because of some crazies."

When they saw polls showing a surprisingly close race in Massachusetts three weeks ago, Mastroianni said, she and her husband drove to Wrentham -- Brown's hometown -- and volunteered to do phone banking at his office.

Heavy spending by Washington, President Obama's healthcare push, and the administration's decision to try some accused terrorists in civilian court were -- by far -- the issues cited most frequently by the Brown crowd.

"He's going to keep my country safe for my children," Doherty, the machine operator with the hard hat, said.

Not that Brown wanted to be linked to the tea party-9/12 crowd, mind you. Anger from the right provided Brown with an energized base and an army of workers, but polls showed that his Republican Party remains in profound disfavor in Massachusetts. A PPP poll the weekend before the election found that 62 percent of Bay State voters have a negative view of the congressional Republicans whose ranks Brown will soon be joining.

The key, then, for Brown was to hang on to the tea party base without scaring off less conservative independents who are motivated by a more general sense of economic anxiety. Hence, his shunning of the Republican label and national Republicans (except Rudy Giuliani and John McCain) and his repeated declarations of political independence.

"The independent majority," he declared on Tuesday night, "has delivered a great victory."

But his tea party supporters wasted no time claiming credit for helping Brown to victory. The group Tea Party Express circulated a Rasmussen poll early Wednesday morning showing that 40 percent of Massachusetts voters now approve of the movement (to 41 percent who disapprove), and talking about the party's contribution to Brown's win. "Many different groups involved in the tea party movement contributed to Scott Brown's victory in a number of ways, and each brought their own strengths to the table," said the group's Amy Kremer. "Tonight's victory in Massachusetts is just the start of things to come."

In this sense, much of his strong showing can be attributed to an irony of politics: The more dominant a party becomes nationally, the weaker it becomes in elections. So when the Democrats were handed the White House and House and Senate majorities by the electorate in 2008, they also assumed ownership of the massive economic problems that were created under Republican rule. Unfair? Of course. But that's how politics works.

"The [Republican] Party is the windfall beneficiary of a failed 2008 presidential election," said Paleologos. "And this is a fairly typical early symptom of a midterm backlash. We've seen it happen with previous presidents. It's fairly predictable."

For Obama, there is comfort in this. Ronald Reagan and Bill Clinton watched their parties suffer drubbings in the first midterms of their presidencies -- at which point their opponents (and the media) wrote them off as certain one-termers. And they were both reelected two years later by wide majorities. Speaking at Brown's party tonight, Mitt Romney called the election "a shot heard round the world." But history suggests that it may all be forgotten a few short years from now -- if the economy improves.

One other factor must be mentioned: gender. Coakley is now (at least) the eighth woman from a major party to seek a Senate seat or the governorship in Massachusetts. And she is the eighth to lose. Yes, they all had their individual deficiencies, but the pattern is undeniable -- even if it's too simplistic to simply say Massachusetts is filled with sexist voters.

Like Coakley, O'Brien lost an early lead in her race against Romney, although the circumstances weren't completely analogous. Still, the demographics of Brown's coalition are eerily similar to Romney's -- bedroom community people with blue-collar voters from small and midsize cities. Romney connected voters' faceless frustration with Beacon Hill to O'Brien. Brown connected voters' faceless frustration with Washington to Coakley. The effect was the same.

"Women candidates can't make mistakes in these high-profile races," said O'Brien. "They're blown out of proportion. And women play a much greater price for negative advertising."