"The Hidden Brain": Behind your secret racism

The author of a new book talks about the brain's hidden impulses, and why you're more biased than you think 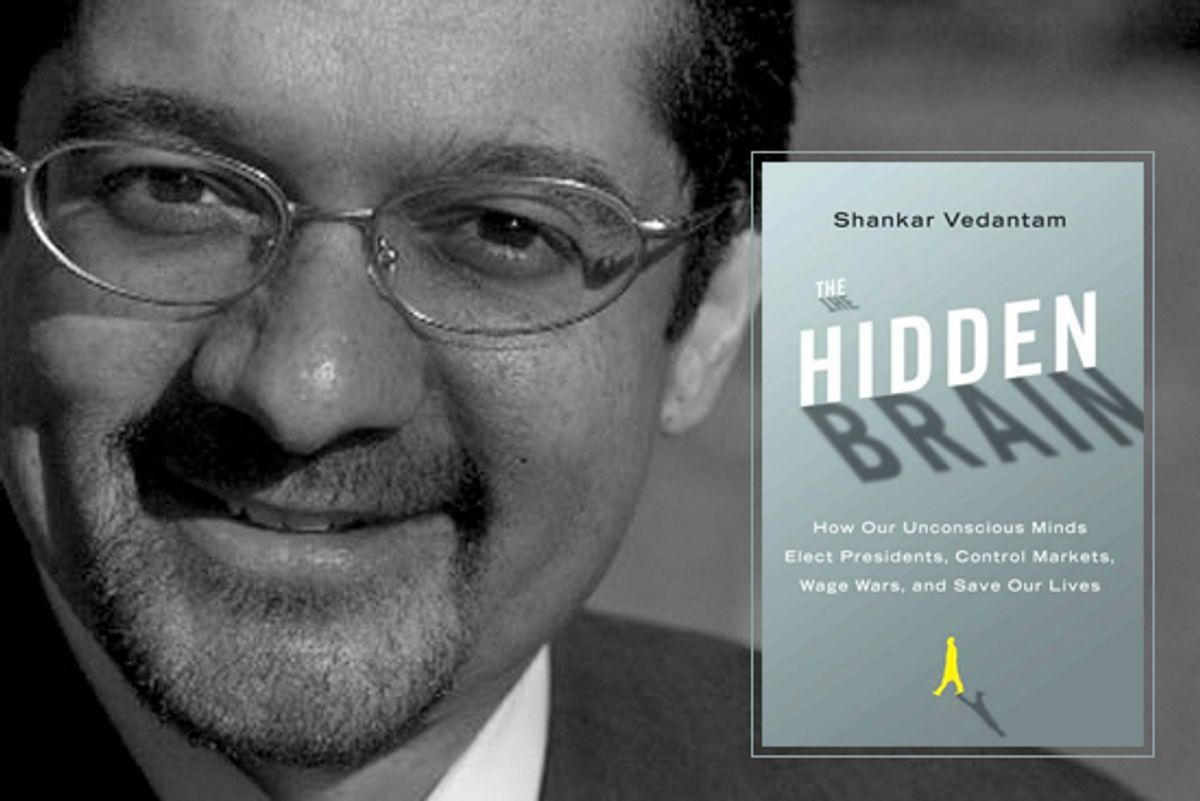 Of the many viral-video meltdowns pop culture has endured, few are as viscerally disturbing, as painful to watch, as Michael Richards' racist rant during a 2006 stand-up appearance. As you'll no doubt remember, the man better known as Kramer lashed out at a heckler in his audience with a shocking string of slurs, including the brutally memorable line, "Fifty years ago, we'd have you upside down with a fork up your ass." The breakdown so outraged the general public that even today, if you Google "Michael Richards," it auto-completes to "Michael Richards racist."

Shankar Vedantam, a science writer with the Washington Post, uses the Michael Richards incident in his new book, "The Hidden Brain," to illustrate the way he believes our unconscious can betray us -- and reveal biases we wouldn't even acknowledge to ourselves. Vedantam uses a wide array of vivid true stories to make his point: The tragic tale of a woman who is brutally beaten in front of dozens of onlookers illustrates how a crowd's inaction can trick our brain into ignoring pleas for help; two transsexuals who've experienced both sides of the gender divide help illuminate how unconscious sexism can change lives.

Salon spoke with Vedantam over the phone about the role of the unconscious, why we should be gentler to Michael Richards and the connection between racism and a Republican voting record.

What is the hidden brain?

The hidden brain is a term I devised. It's a shorthand term that's broadly used to describe unconscious influences in everyday life. I decided to coin it because it was a useful writing device, like Richard Dawkins used the selfish gene, as a way to explain these cognitive processes. I'd describe it as anything that we're not aware of that is influencing us.

Why not just use the term "unconscious"?

The word "unconscious" carries a lot of cultural and historical baggage, and some of it I embrace and some I do not. A lot of the ideas about the unconscious came from Freud. I'm in broad agreement with him about the significance of the unconscious, but this book is based largely on scientific evidence. It's an empirical look at the brain instead of an intuitive one.

You spend a considerable amount of the book explaining how the hidden brain affects the way we think about race -- and suggests that racism is deeply embedded in many people's brains.

I don't think racism is hard-wired into the brain; that would suggest we are always bound to be racist. In many cases this mechanism is very functional. If you are persuaded by evolutionary biology, there are strong reasons why we would want to form quick associations. If you were to see one tiger in the wild, it would make sense that you would not want to have repeat encounters with tigers. The brain is very good at extrapolating and generalizing. This may have carried survival value at one point, but now we operate in a more complex world where the quick judgments that once aided us may now imperil us.

I think the brain does have that unconscious mechanism, but what those associations end up being are shaped by culture, personal histories and whom we choose to associate with. The fact that many Americans have a race bias against Africans and African-Americans isn't because of biology. It's because of culture.

But many of the test subjects that you talk about in the book are schoolchildren being taught that racism is bad. Why does this kind of subconscious racism persist?

Because the hidden brain doesn't always learn what it's taught to learn. We can consciously teach people that certain attitudes are right or wrong, but that does little to alter the hidden brain. It's a much dumber system that learns much more through repetition and blind argument and making associations. When you're watching television, for example, the hidden brain is watching who is being shown in positions of authority. It's not something you need to think about on a conscious level. By the time a child is 1 or 2 or 3 or 4, he or she has seen thousands of these kinds of associations.

The book talks about Michael Richards' racist onstage barrage. What makes you think his racism was unconcious?

For days and weeks and months people were asking themselves how he could say such a thing. Michael Richards said, I don't really know, I'm not a racist person. We have a dynamic when somebody is caught in the act of saying something racially biased, and they claim afterward that they don't feel any racial animosity. Our reaction is to disbelieve them.

The reason I think the hidden brain is playing a role in this situation -- let me compare this to Sen. George Allen's "macaca" moment. If you didn't have a hidden brain and everything was conscious, and you know that you're on videotape and it would end your Senate campaign, why would you use that offensive term? He was an experienced politician. Why would that person say something like that? The same goes for Michael Richards.

It's not that they're not responsible for what they're saying. One reason these outbursts surface is that in moments of stress, our conscious abilities are overwhelmed. With an incident like Michael Richards, the correct response is to respond with a certain amount of compassion, because the same biases that are hidden in their brains are probably hidden in our mind as well.

So we shouldn't be angry and disgusted when somebody says something like this?

This may be unique to human beings, but we care a lot about motives. If somebody said a racist thing they meant to say, should we treat them differently than if they didn't mean to say it? When we think about racism, I would argue that one of the errors we make is to focus excessively on the issue of intent and not enough on the issue on outcome. If you're thinking about the health disparities that arise out of racial bias -- like, for example, different infant mortality rates between blacks and whites. They might be arising out of racial bias, but the outcome is the same whether it's expressed consciously or unconsciously. I think most bias is happening at an unconscious level, and it still has enormous ramifications. But coming out of the book, I hope people are going to think less about motives.

That said, just because the unconscious is real doesn't mean we're off the hook with our personal responsibility. I think we should treat George Allen and Michael Richards compassionately, in the sense that we should understand where it came from, but we shouldn't let them off the hook.

But I'm gay, and if somebody called me a faggot, I would have a lot of trouble feeling compassion for that person, even if they're stressed or tell me that they're not homophobic. Lots of people manage to get through periods of stress without using slurs.

We are all complex creatures and have complex histories. Different things in the environment can trigger some things in some ways. George Allen and I don't have the same history. I grew up in India where the issue of homophobia was something I didn't quite understand. The implicit association test has found that many people from South Asia do not show homophobia. You could say there's something special about South Asians, or you could argue that there's something special about the context in which they grow up.

Not taking away from your central point, my point is, in terms of effectiveness, what can we do to change it when talking to somebody on a conscious level is ineffective? They will admit that it's wrong. But does that mean we have changed what's in his unconscious mind?

One of the problems I have with the way we think about prejudice is that it's too much about individuals and personal bias. I think the responsibility shouldn't just be placed on the individual. It should also be placed on the culture.

But that sounds like a Catch-22. If it's so hard to change an individual, how can you expect to change a whole society that's made up of them?

I don't think these things are unchangeable. I think there's a great deal individual people can do if you buy the idea that homophobia stems partially or substantially from the unconscious. It's because people have been exposed to certain things their entire life.

The odds that you're going to see a gay family on TV is very slim, so it's not surprising that people think of heterosexism as normal. People are always seeing A associated with B, and by the 1,000th time, that association becomes hard-wired in the brain. We need to learn to associate A with C.

So how do we change culture? Do we just have to wait for biased people to die off?

I actually don't think all the people dying off is going to solve the problem. There is incremental change, slowly, but I'm pretty sure that in 20 years' time, 90 percent of the family relationships you see on TV will still be heterosexual. They're producing what audiences want to see.

There are two things that people can do. The first thing to do is to recognize those associations. Most people don't think the unconscious brain exists. If you ask them if they're homophobic they say no. In reality they have unconscious associations that predispose them to have those attitudes, and if, for example, I learn that my car has a tendency to veer to the right I correct it. If I don't place a slight bias on the steering wheel to the left my car is going off the road. At the societal level there are important things people can do. What we see on the TV, in newspapers, in the law and decorum matter.

One surprising connection you make in the book is between racism and voting records. Are Republicans really more likely to be racist?

The research specifically makes a connection between racial bias and whether congressional districts vote Republican or liberal -- in that sense I do make that connection.

The research data shows that a significant number of Americans show biases that are pro-white and anti-black in the United States. It's true for Democrats and Republicans, but if you were to draw a map of where these people are in the country geographically and measure how much racial bias they have, there is a correlation between the degree of racial bias and political orientation. Districts with the highest racial bias vote Republicans, districts with the lowest racial bias tend to vote Democrat. There are other factors at play, but generally it holds true.

What do you want people to take away from the book?

The sense they could lead fuller, happier and better lives if they were more aware of the factors prompting them to act the way they do. People and policymakers need to take heed of the effect the unconscious has in our everyday life.