The big lug has the brawn of Schwarzenegger and the charm of old Hollywood. So what if he has to wear a tutu? 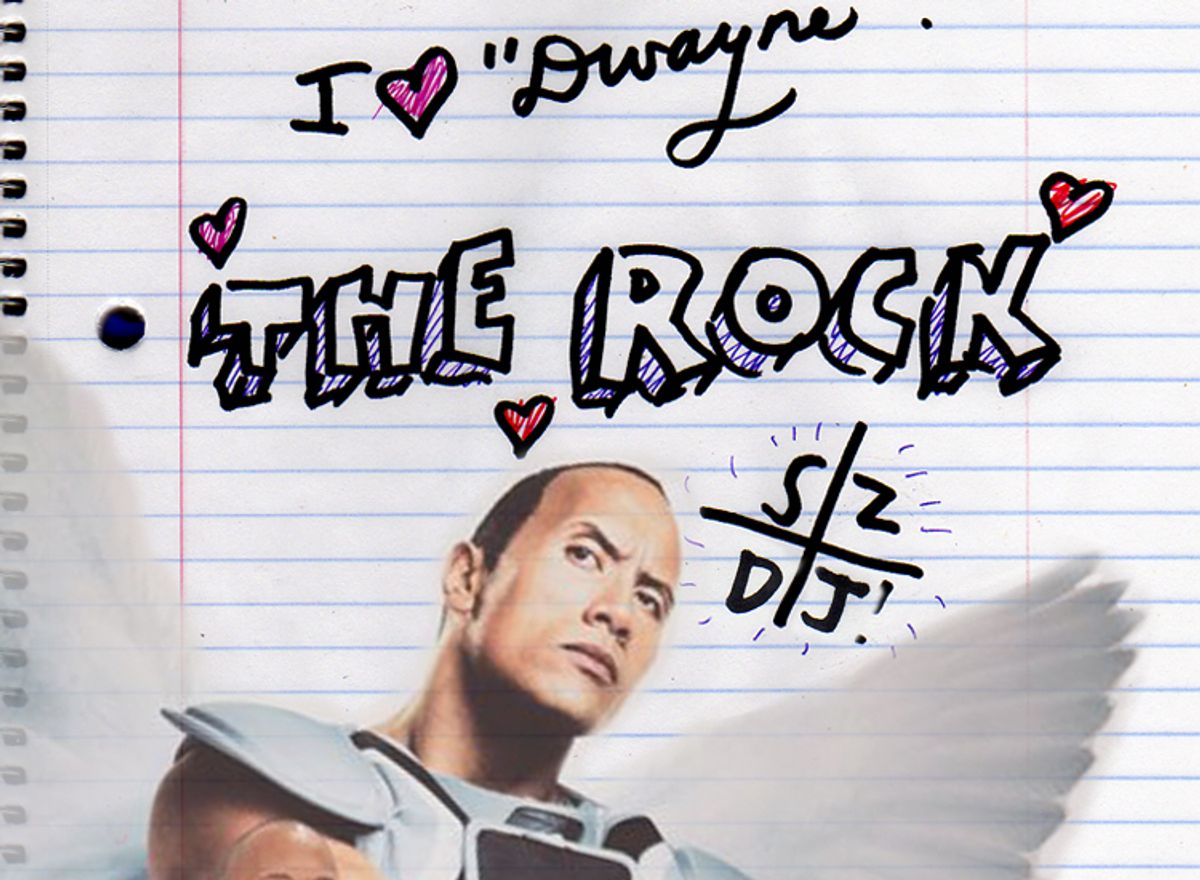 Few actors are as big — as broad and as muscular, and as physically sturdy — as Dwayne Johnson, the World Wrestling Federation/Entertainment champion formerly known as The Rock. But plumbing the appeal of Dwayne Johnson the actor requires setting the size of the package aside for a moment, the better to zero in on subtleties: The expressiveness of those unnaturally mobile eyebrows or the way, either in character or during the course of an on-camera interview, he almost seems to blush when he makes a self-deprecating joke, as if he were wary of calling too much attention to himself. Johnson is so good-natured that even when he's not wearing a smile, his facial muscles carry the ghost of one. Maybe that's part of his charm as a performer: For such a big lug of a guy, his star quality is of the quiet sort. No wonder Hollywood doesn't know quite what to do with him. Until recently, at least, that wasn't the worst thing. Since his film debut, in Stephen Sommers' 2001 "The Mummy Returns," Johnson has starred in a badly received remake of "Walking Tall" (2004), played an ostentatiously gay bodyguard (unfortunately saddled with stale gay stereotype jokes) in F. Gary Gray's Elmore Leonard adaptation "Be Cool" (2005), and provided the voice of a cartoon space explorer in "Planet 51" (2009). Those weren't star-making roles, or ones that increased any star-power momentum he'd already built.

But they haven't tarnished Johnson either. Just as his body has been trained and disciplined to sustain all sorts of physical abuse in the ring (he retired from pro wrestling in 2004), so is Johnson, as an actor, fully willing to endure all kinds of humiliation, ribbing and teasing emasculation — and always with a smile. In his new movie, "Tooth Fairy," he even allows his considerable brawn to be packed (briefly, thank God) into a ballet-pink tutu, which matches the downy but defective wings he's suddenly sprouted. More on the mechanics of "Tooth Fairy" later, though I'll note now that Johnson's tutu, the result of a mix-up in Tooth Fairyland, is later exchanged for a slightly more masculine pale-blue satin tunic with matching tights, also with coordinating wings. Johnson's ability to gracefully survive even these outfits — not to mention the movie's dim-bulb, barely there script (by comedy vets Lowell Ganz and Babaloo Mandel, among others) — probably has everything to do with the fact that he's a good sport and has a strong sense of showmanship. The big question is, how does he put that to work in better movies?

In the past few years Johnson has been easing into the role of family-friendly movie star: In "The Game Plan" (2007), he played a bachelor NFL star suddenly charged with taking care of the 8-year-old daughter he didn't know he had. And "Tooth Fairy" is obviously aimed at the under-10 set: Johnson's character is an arrogant minor-league hockey player who no longer even bothers to try to score; instead he coasts on his fame as a rough-housing player with a penchant for knocking out opponents' teeth. He's sentenced (by Tooth Fairy CEO Julie Andrews) to serve a spell as a real-life tooth fairy, in order to shed some of his hubris and to learn not to trample on others' dreams.

The problem with casting Johnson as a full-of-himself athlete who needs to be transformed is that he can't pull off the conceited, cocky routine convincingly. Strangely, and to his credit, he looks much more comfortable in a tutu than he does bragging about his athletic prowess or stature. But the one thing Johnson is great at — and why it does make sense for him to build a career as the star of family comedies — is that he's terrific with child actors. In one scene in "Tooth Fairy" his character works hard to win over the sullen teenage son (played by Chase Ellison) of his girlfriend (Ashley Judd). Johnson eventually wears the kid down — they end up playing poker with a pile of Cheetos as the stakes. The scenes between the two actors have a relaxed, unfussed-over quality. Johnson never plays down to his colleagues, even the not-yet-grownup ones. He's generous and low-key, apparently fazed by nothing; maybe that's what years of allowing yourself to be tossed around the ring, knowing you'll have to bounce back up again, will buy you.

Or maybe Johnson is just at heart a sweet, easygoing guy. For an actor of his temperament, especially, there's no shame in making movies aimed at kids. It's just that Johnson deserves better ones than "Tooth Fairy" (which was directed by Michael Lembeck, previously guilty of perpetrating the horror known as "Connie and Carla"). Johnson has already proved himself in a range of roles: He played a suavely comic CONTROL agent in the 2008 "Get Smart" — the role may be underwritten, but Johnson's sly sense of timing is superb. In "Gridiron Gang" (2006), one of those shamelessly satisfying movies about a bunch of young criminals whose lives are turned around by the discipline of sports, Johnson plays a tough-but-caring football coach and juvenile-hall warden who devotes his all to his delinquent charges, even as he cares for his ailing, elderly mother. (If you ever find yourself stuck in juvie, Johnson is the guy you'd want watching your back.) And in Richard Kelly's aggressively bizarro 2006 "Southland Tales," Johnson gives what may be his best performance to date, as an amnesiac Schwarzenegger-like action star. At one point, he fixes another confused character (played by Seann William Scott) in his gaze and asks, "Do you ever feel like there's 1,000 people locked inside of you? ... But it's your memory that keeps them glued together. Keeps all those people from fighting one another. Maybe in the end that's all we have. The memory — gospel." Johnson has what it takes to pull off semi-overwritten lines like those: It's all in the eyes. He knows how to soften his expression, to dull the inclusive mischievousness of his deep-brown eyes, to the point where we really do believe he's a guy in search of something, in search of a lost part of himself.

What makes the performance work is the contrast between the obvious confidence in Johnson's physical carriage (it would be impossible for him to hide it) and the fluttery interior nervousness that his character is stifling. And if he's capable of doing work like that — well, then, what's he doing wearing a tutu? One of the roadblocks may be the very thing that brought Johnson — a third-generation professional wrestler — fame and success in the first place. You can't just cast Johnson as a regular guy: That body, in its unreal magnificence (unreal, that is, if you're not the one who's worked hard to build it), always has to be explained

Johnson isn't, of course, the first actor to have to solve this quandary. Arnold Schwarzenegger, Vin Diesel and Sylvester Stallone, to name just three, have all tussled with it, with varying degrees of success. But in terms of looks, demeanor and just outright charm, Johnson is like none of those actors. He's more like old-school athlete heartthrob Johnny Weissmuller, the former Olympic swimmer who found one good character in Tarzan and was lucky enough — and appealing enough — to stick with him through the whole of his career.

Franchises like that are pretty much nonexistent in Hollywood these days, which means that as Johnson moves from one character to another, he will simply have to bring his body with him and make it fit. I didn't know much about Johnson until I saw him in his first starring role, an expansion of the one he played in "The Mummy Returns." In "The Scorpion King," a loopy, nonsensical but deeply enjoyable Saturday-afternoon entertainment, Johnson again played Mathayas, but his character is not yet a king: At this point, he's just a beefed-up warrior who must dispatch an army of red-turbaned baddies to fulfill his destiny.

He is also, of course, mostly shirtless. But here I confess that I like Johnson better with clothes on: His muscles are fabulous, for sure, and I know you just can't grow those things overnight. But after seeing one of Johnson's movies, when I try to picture what his undressed torso looks like, the only images I can easily conjure are the Lee Lawrie statue of Atlas at Rockefeller Center, with its squared-off art deco muscles, or the definitive but delicate Jazz Age crosshatching of a Rockwell Kent nude. I'm aware, of course, that both of those references contain the word "Rock," which could have something to with the association I make in my head.

Johnson's body isn't artificial-looking to me, but it's so extreme that it looks stylized, more like an artist's vision of a man's body than an actual one. But that's perfectly OK for the movies, which has always been a natural home for people who look better than real. I know we're not supposed to call Johnson "The Rock" anymore — he has politely stated, in interview after interview, that that's his preference. And the more I see him in the movies, the better I understand it. What's odd and surprising about "Tooth Fairy" is that, near the end, Johnson's character is fitted with a pair of magnificent, fluffy wings whose scale and majesty suit him perfectly. Johnson may be a big guy, but he's also capable of creating the illusion of weightlessness. Brawn alone can't make you a movie star: The real secret ingredient is lighter than air, and the trick, as Johnson seems to know, is to carry it on your shoulders as if it weighed nothing.