Obama on the banks: "I'm ready to fight"

Wall Street won't like the president's new "Volcker Rule." So if he really wants a battle, he's got one 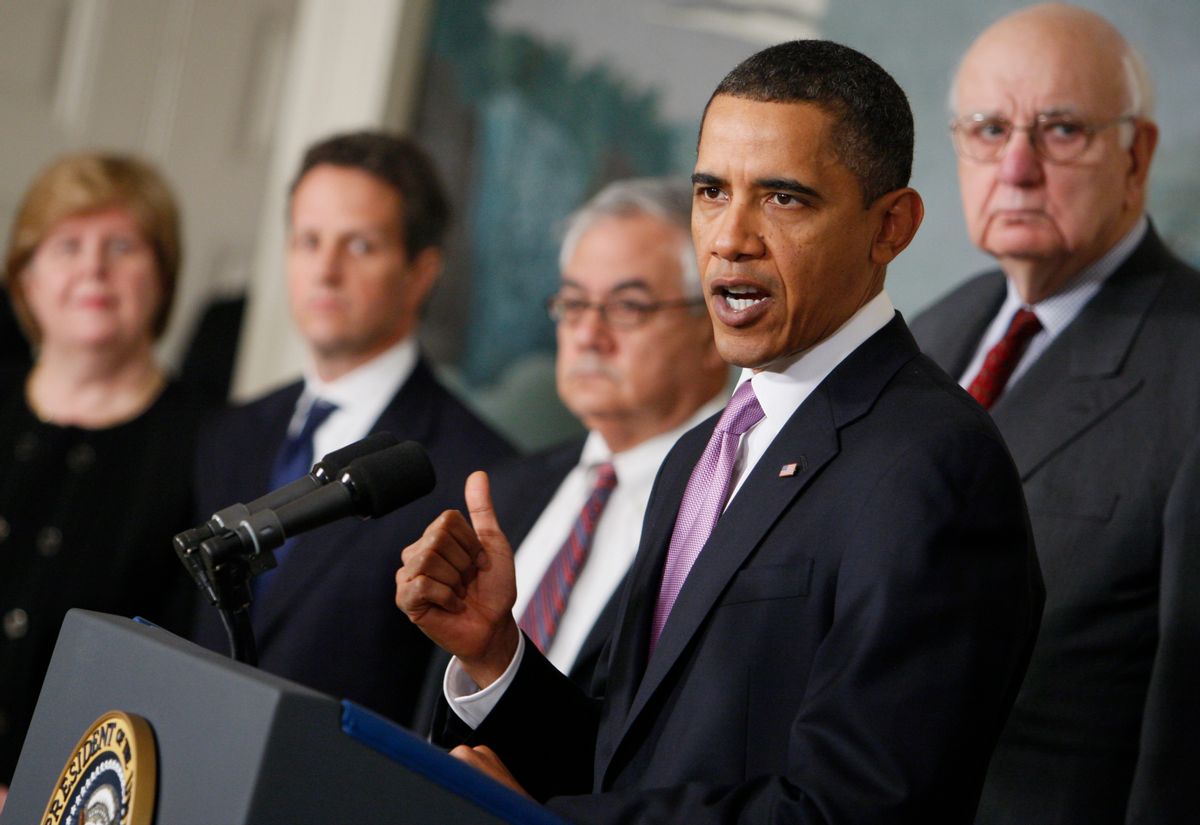 Obama just can't get a break. Moments before the president was scheduled to announce a major policy shift on banking regulation, the Supreme Court handed down its ruling weakening campaign finance laws. The upshot: Corporations and unions and other entities will now, once again, be allowed to spend freely on political advertising. Can you hear the sound of media coverage shifting its attention, en masse?

But the two news events are intimately connected. If the president follows through on his promises to limit the size of financial institutions and to prevent banks from using federally insured deposits to make bets on securities, the banks will fight him with everything they've got. That much we already knew. But now the Supreme Court has handed Wall Street a huge club with which to thwack Obama or any other politician who dares to try to restrain the likes of JPMorgan and Goldman-Sachs. And you can bet they won't be shy to use it.

Talk about your American tragedies. The banks have loads of money, largely because of a taxpayer bailout. Now they're going to start spending that money with a freedom they haven't enjoyed in 20 years, in order to prevent the government from making sure they don't run wild and wreck the economy again.

So what's at stake? In a short address to the nation Thursday morning, Obama previewed two major new additions to the reform package the administration has previously set forth.

The first initiative will prevent banks from setting up their own hedge funds or private equity funds to trade for a bank's own benefit. Significantly, Obama dubbed the initiative "the Volcker rule" -- indicating that the former Federal Reserve Chairman thought by many Washington-watchers to be shut out of the White House by Larry Summers and Tim Geithner is now once again a major policy player.

When banks benefit from the safety net that taxpayers provide, which includes lower cost capital, it is not appropriate for them to turn around and use that cheap money to trade for profit. And that is especially true when this kind of trading often puts banks in direct conflict with their customers' interests.

The fact is, these kinds of trading operations can create enormous and costly risks, endangering the entire bank if things go wrong. We simply cannot accept a system in which hedge funds or private equity firms inside banks can place huge, risky bets that are subsidized by taxpayers and that could pose a conflict of interest. And we cannot accept a system in which shareholders make money on these operations if the bank wins, but taxpayers foot the bill if the bank loses.

It's for these reasons that I'm proposing a simple and common-sense reform, which we're calling the Volcker Rule, after this tall guy behind me. Banks will no longer be allowed to own, invest or sponsor hedge funds, private equity funds or proprietary trading operations for their own profit unrelated to serving their customers.

Obama's second proposal -- aimed at limiting the size of financial instituions -- is a little bit murky. He first noted that "I'm also proposing that we prevent the further consolidation of our financial system." But that's not too encouraging, because the system is already far too consolidated.

He then referred to the "deposit cap" which currently limits any single bank from controlling more than ten percent of all U.S. desposits, and said that "The same principle should apply to wider forms of funding employed by large financial institutions in today's economy."

What exactly that means was not clear either from Obama's speech or from a briefing provided to the press earlier Thursday.

Finally, Obama made a stab at finishing with some tough talk.

I welcome constructive input from folks in the financial sector. But what we've seen so far, in recent weeks, is an army of industry lobbyists from Wall Street descending on Capitol Hill to try and block basic and common-sense rules of the road that would protect our economy and the American people.

So if these folks want a fight, it's a fight I'm ready to have.

Well, it's a fight that he's going to get, and with the help of a Supreme Court voting along partisan lines, it's a fight that is going to see Wall Street spending with abandon in the runup to the midterm elections. But win or lose, after the health care reform debacle, voters are going to be watching closely to see just how hard Obama fights. His honeymoon is long over.