Would you eat this fish?

The chef who tried to get us to eat the nutria turns his attention to the invasive carp. Will people buy it? 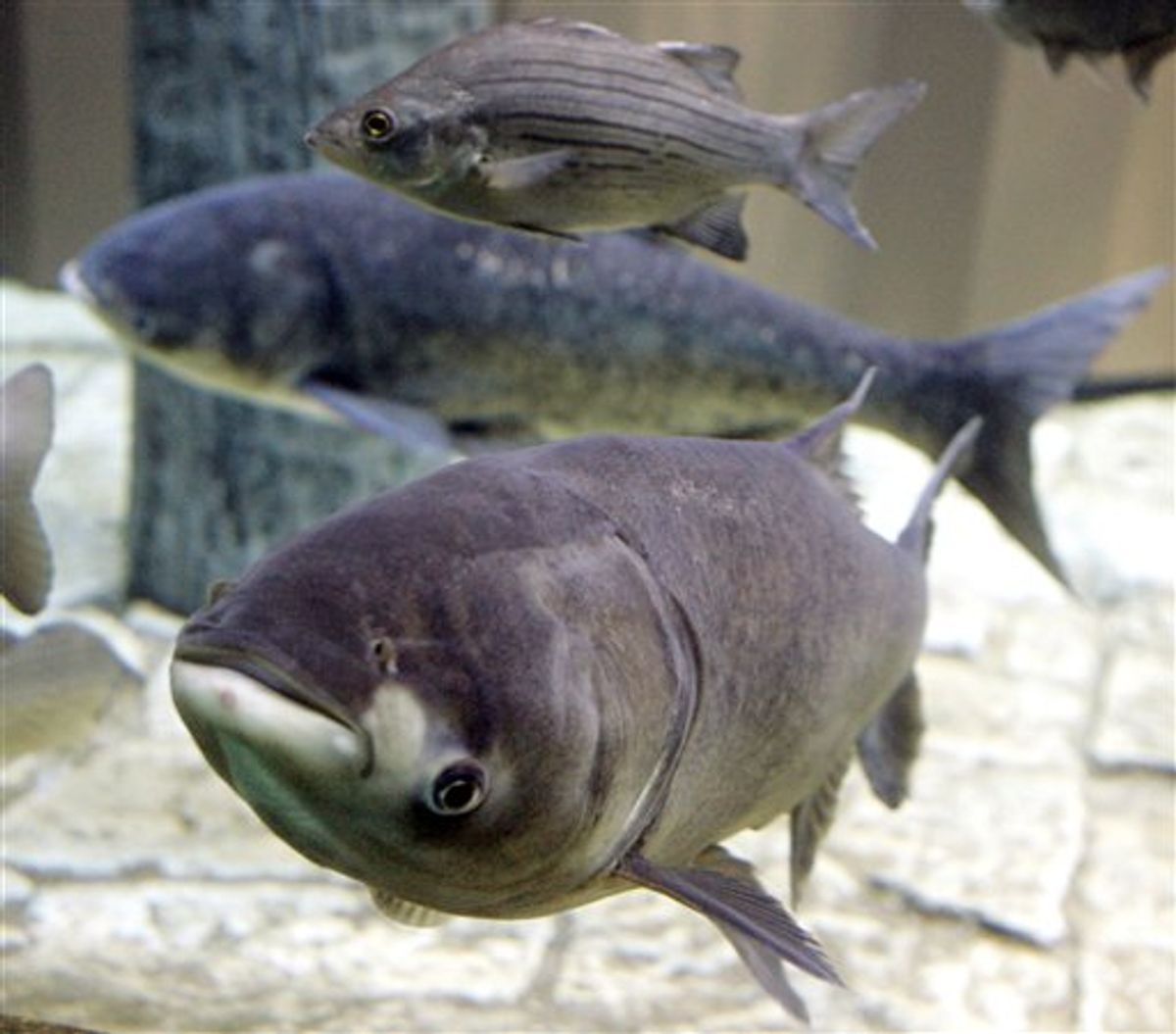 FILE - In this Thursday, Jan. 5, 2006 file photo, a bighead carp, front, a species of the Asian carp, swims in a new exhibit that highlights plants and animals that eat or compete with Great Lakes native species, at Chicago's Shedd Aquarium. Illinois environmental officials will dump a toxic chemical into a nearly 6-mile stretch of the Chicago Sanitary and Ship Canal Wednesday, Dec. 2, 2009 to keep the voracious Asian carp from entering the Great Lakes while an electrical barrier is turned off for maintenance. (AP Photo/M. Spencer Green, File) (AP)
--

Invasive species are not, by any means, a new problem on American soil. From zebra mussels to boa constrictors, they've been pushing out indigenous animals for centuries. Louisiana chef Philippe Parola, however, has an unusual strategy to get rid of them: putting them in our stomachs. (His oh-so-subtle eating philosophy: "You’ve got to have balls.")

In 1998, the flamboyant Parola was involved in the notorious (and unsuccessful) attempt to make the nutria, a large aquatic rodent pest, into a nationally popular meat. (It probably didn't help that the animal looks like that giant rat from your childhood nightmares.) Now he’s turned his attention to another invasive species, the Asian carp. The large fish, which can reach up to 30 pounds, has muscled out indigenous fish in American waterways, including the Mississippi, and has the dangerous habit of jumping out of the water near moving boats (to see them in terrifying YouTube action click here). Now, working with the state of Louisiana, Parola is hoping to curb its numbers by marketing the fish as a menu item. As part of his outreach, Parola will be promoting the fish to the 1,500 members of the annual National Grocer’s Association convention in Las Vegas.

Salon spoke to the energetic Parola over the phone about America’s conservative eating habits, his name-change marketing campaign, and why it’s so hard to get people to eat a giant rat.

How did you get involved in this effort to turn Asian carp into a menu item?

I was riding on my boat, going fishing, when these two fish literally jumped into my boat and landed on my feet. I’m a chef and I love exploring new avenues for new food, so when I saw them I decided to bleed them, bring them to my restaurant and fillet them. I found it was a delicious white meat. Then I called the Louisiana Department of Wildlife and Fisheries and let them know that this fish needs to have a marketing campaign.

Why haven’t people been eating this fish the whole time?

It was classified as a trash fish -- destroying nets, killing people [by knocking them out of boats], wiping out the native fish species by eating their food source. But there were two reasons we weren’t eating them: If you don’t bleed the fish, the meat is grayish-looking without much flavor, and there’s a lot of bones in this fish. Those were two things that nobody could overcome. I overcame them by bleeding the fish and steaming the meat so I could remove the bone.

Why are you so passionate about getting people to eat Asian carp?

I believe that if you kill, you eat it. The No. 1 goal is to resolve this ecological problem. The second goal is to create jobs. The third thing is for consumers, who have the most to gain. This fish is extremely healthy. It’s rich in omega 3 and there is no mercury because the silverfin is a filter feeder.

The silverfin? Is this your new name for the Asian carp?

Some clown from the USDA classified it as a carp. Carps are a bottom feeders and this is a filter feeder. The shape of the fish, the way it grows, the color: Literally there is no similarity to the carp. There’s no other species named the silverfin, so what’s the problem?

Well, off the top of my head, shouldn’t it be up to scientists to name the fish?

But what I’m saying to you -- very loudly -- is that this fish doesn’t have any similarity with the carp. I want somebody out there to redo that research and help us out.

You were part of an initiative to get people to start eating nutria, which is a rodent commonly found in Louisiana. It didn’t get a lot of national traction. What happened?

It was successful until the government went in and stopped it. The FDA wouldn’t allow us to use the FDA stamp because the nutria needed to be killed in a slaughterhouse. The idea was to hunt them in the wild, but nobody would buy something without the FDA approval. I’m very proud I was involved with that. To quote one of our presidents, ask not what your country can do for you, ask what you can do for your country.

To be fair, it was also pretty hard to imagine people eating an animal that looks like a giant rat.

Yes. That was the biggest difficulty to overcome. I did a promotion with alligator meat, and that went fine, but with nutria, the fact that it’s classified as a rodent, and that cops were shooting nutria in the gutters kind of killed it. At least this fish doesn’t have a rat tail.

Why do you think Americans are so reluctant to eat unconventional animals?

America has been spoiled in many ways. People can get boneless fillet of fish, and consumers got used to that. Any other country in the world you will eat a fish with a head and bone and tail on -- which tastes better.

Are there any other maligned animals that you’re going to try to turn into food?

You can tell people that if they send one to me, I guarantee that I’ll find a way to sell it. If it flies, crawls or swims we can eat it. I recently got a call from Australia about a carp there that nobody’s eating. I said, hey, send it to me. I’ll give it a try.

The key is to be smart about it. When I was doing nutria promotion, there was guy on a radio station who asked me, Why should I eat nutria when I can have chicken every day? I wanted to tell him, listen dumbass, this animal is invading your city, that’s why you want to eat it.