Like its ambitious first-year attorneys, ABC's frothy legal soap feels a little too shiny and perfect to succeed 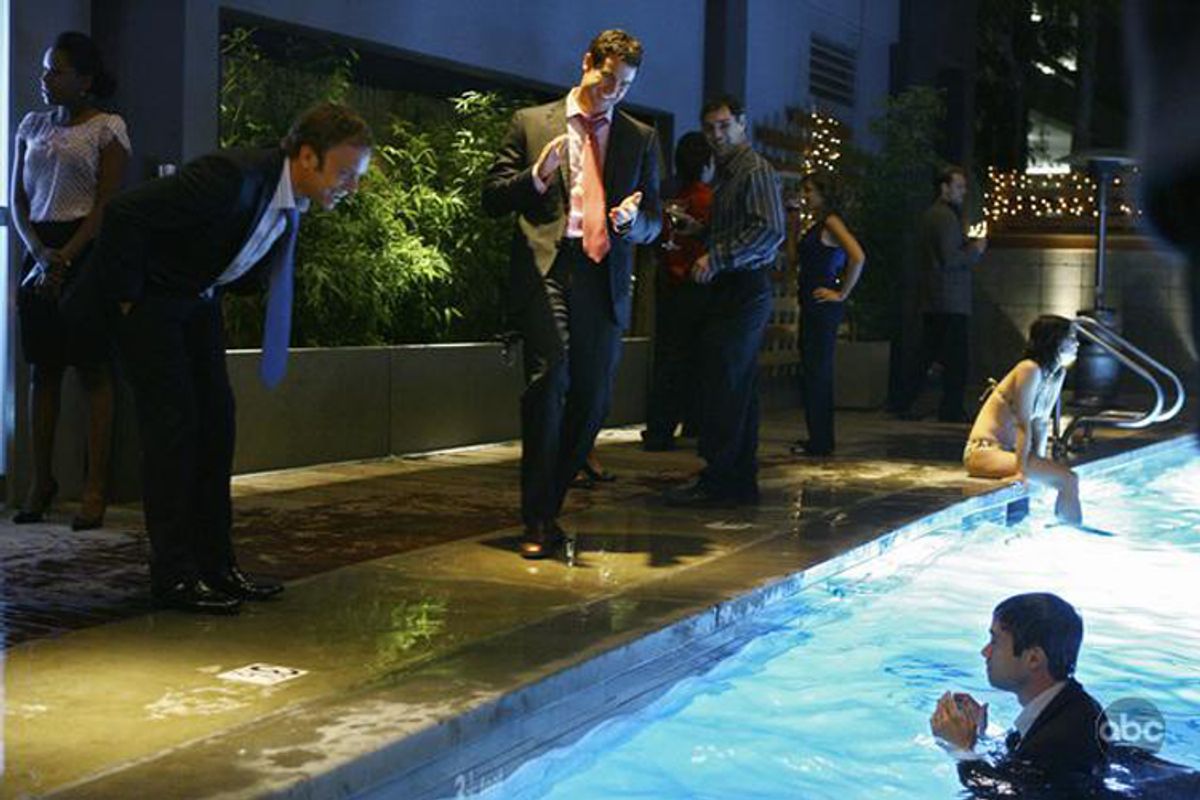 When you do everything perfectly, shouldn't you be rewarded for it? That's what a gaggle of first-year lawyers ask themselves in ABC's "The Deep End" (premieres 8 p.m. Thursday, Jan. 21), a new one-hour drama about recent law grads who work long hours, cling fast to their ideals in the face of corruption, and toss back liquor shots by crystal-blue swimming pools.

But the same question might apply to "The Deep End" itself: The cast is hot, the dialogue is sharp and snappy, the story lines move briskly, and we're offered a few layers of soapy intrigue immediately, from Dylan (Matt Long), the young idealist who's falling for the pretty redheaded paralegal while trying not to get fired by his unethical shark of a boss (whom everyone refers to as "the prince of darkness"), to Beth (Leah Pipes), the gorgeous blond perfectionist whose disapproving, cutthroat father fuels her temptation to screw over other people just to get ahead.

Yes, this is "Ally McBeal" meets "Lipstick Jungle" meets "The Practice," a frothy, fast-paced mélange of every ABC soap that ever featured high-powered yuppies whose designer heels echoed importantly as they click-clacked over shiny corporate floors. With a premise this slick and promising, with faces this pretty, how could "The Deep End" possibly fail?

"Dylan, wake up. Law school is history," says Beth, fellow newbie. "We're first years, grunts, doormats, newbies. Barely worth the partners' time, yet expected to perform flawlessly." Is Beth talking about corporate law or the television industry? Because this is a midseason pilot we're talking about. Like law degrees, pilots are wildly expensive ventures that require a big investment of time, energy and brainpower, but the big payoff isn't exactly guaranteed.

And if there is such a thing as being too good at what you do, "The Deep End" may just qualify. "Firefighters with cancer? Screw firefighters with cancer," snaps the prince of darkness himself, Cliff (Billy Zane), as he strides purposefully through the immaculate, light-filled offices of Sterling Huddle Oppenheim & Craft.

"Don't stick it in anything that hasn't been fully vetted first," Susan (Nicole Ari Parker) tells Liam (Ben Lawson) about his bad habit of sleeping with random beautiful women, whether they're clients or bystanders. (Haven't we met this guy before on five or six other shows?)

"I’m not sure I can do this," Dylan tells Cliff. "Well, you will," Cliff snaps back, "or I'll make sure you never practice law again. Now leave, before I set you on fire."

Yes, at times it's tough to be set on fire by "The Deep End's" steady flow of clichés, its menacing cads and cuddly ingénues and high-powered neurotics. But even if "The Deep End" does manage to pull us into its shiny enclave of Lawyer Barbie outfits and flirtatious banter and super-important cases -- involving doe-eyed children who want their mommies! -- that are also ethical litmus tests, that still doesn't mean this will be the next courtroom "Grey's Anatomy." Even if we're offered the same dependably melodramatic, sexy story lines week after week, that doesn't mean this show will manage to stay on the air for more than a handful of episodes.

"This is so unfair. I never stop working and this is what happens?!" yelps Addy (Tina Majorino, see also: Heather from "Big Love"). Welcome to the post-Great Recession economy, Addy.

See, the real problem with a shiny glob of perfection like "The Deep End" is that it's so polished that it's impossible to tell whether the show has a discernible voice or any compelling ideas or thoughtful character arcs that might end up driving it forward. Love it or hate it, "Grey's" has a strong narrative voice behind it, and its creator, Shonda Rhimes, has made interesting choices over the years, from its reasonably smart, passionate (if a bit repetitive) voice-over to its bickering, sexy lesbians to its emotionally withdrawn badass surgeons. At first glance, "The Deep End" looks more like plastic food: shiny, colorful and perfectly appetizing, yes, but ultimately unsatisfying.

As Rowdy (Norbert Leo Butz), Dylan's mentor at the law firm, puts it, "Dylan, the man doesn't choose the moment. The moment chooses the man." Is this the right time for a sexy law soap to take national audiences by storm? Or are sexy law soaps well past their prime, just like the sexy legal suspense thrillers that piled up in theaters during the early '90s?

ABC may need to remain cautiously optimistic, and hold off on ordering any more episodes of this particular glossy, possibly empty little trinket of a show. Remember, ABC: Don't stick it in anything that hasn't been fully vetted first.