The White House is divided, Congress runs for cover, and investors are freaking out. 2010 is off to a great start 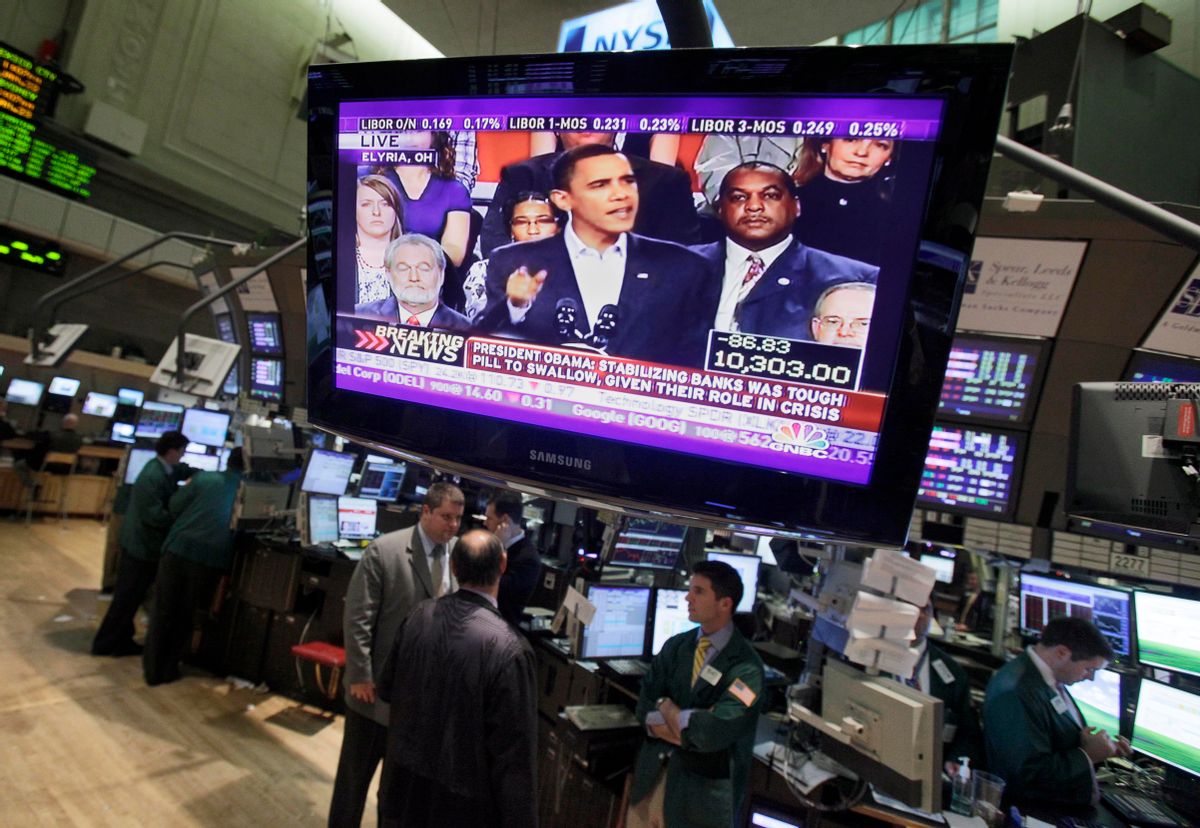 If President Obama's new plan to rein in the big banks is nothing more than a "transparent political stunt," then what are we to make of the dramatic plunge in the U.S. stock market over the last two days? (The Dow Jones industrial average fell 216 points Friday.)

The Big Picture's Barry Ritholtz vehemently tells us not to connect the dots, that this is a case where correlation very much does not mean causation, but he is battling against the tide of commentary. Bank stocks have gotten hammered since the moment word leaked out about the plan, leading to the very strong impression that investors think Obama's proposals have a real chance of getting enacted.

It's hard to understand why investors might be so nervous, however. Treasury Secretary Timothy Geithner, in an interview broadcast on PBS Thursday night, hardly sounded like a man willing to help lead a jihad against Wall Street and went out of his way to emphasize that the goal was not to "break up" the banks. Neither Christopher Dodd, chairman of the Senate Banking and Finance Committee, nor Barney Frank, chairman of the House Financial Services Committee, has gone out on a limb in support of the plan, and their willingness to push for real reform is at least as critical, if not more so, than Obama's. The Republicans now have enough votes in the Senate to maintain gridlock all the way until November, and the GOP is certainly in no hurry for meaningful reform. And with the White House's pathetic performance in failing to push healthcare reform past the finish line fresh in everyone's memory, there are very few observers of the political scene willing to express confidence that Obama will be able to make Republican intransigence backfire on the GOP.

Which is not to say investors don't have good reasons to be skittish, from a more general perspective. If you watch Geithner's PBS interview, you will see someone skating away from all the hard questions and doing a very bad job of sounding enthusiastic about the president's new proposals. Opinions abound as to the merit of those proposals, but that's almost beside the point. Upfront and center, signs of a divided White House on economic policy are not confidence building. Throw in the prospect that a sitting chairman of the Federal Reserve is running a real risk of not getting confirmed, the spectacle of a party with significant majorities in both the House and the Senate manifestly incapable of governing, a significant uptick in jobless claims this week, and a paucity of evidence that the economy is on a sustained path to recovery, and you have all the ingredients necessary for a boiling stew of confusion and uncertainty. Yikes!

Mike Konczal at RortyBomb says we shouldn't obsess about getting financial regulation passed this year:

The smart move is not to turn financial reform into a compromised, counterproductive mess just so it too can be killed last minute, but make a principled stand for what real reform would look like, a marker for those who are with reform, and go from there.

Meanwhile, Simon Johnson adds that Geithner and congressional Democrats need to "get with the program" and push hard for real reform or face terrible consequences.

If the Democrats go at this fundamental shift in policy in a half-hearted manner or with mixed messages, they will be hammered so badly in November that the Massachusetts special election will feel like a victory in comparison.

But if you add these two recommendations together, you end up with the prospect of a pitched political battle for the rest of the year that can only be defined as successful for Democrats if the Republicans are made to look so bad by opposing it that they don't clobber the Democrats in the midterms. Under that scenario, we don't get healthcare reform, we don't get regulatory reform, we almost certainly don't get a climate bill -- in short, we don't get anything substantive out of the political process, except for political warfare.

Happy one year Obama anniversary, everyone!