The Haiti I love is still there

Returning to my sometimes-home, I discovered devastation and friends who died, but the country's heart is beating 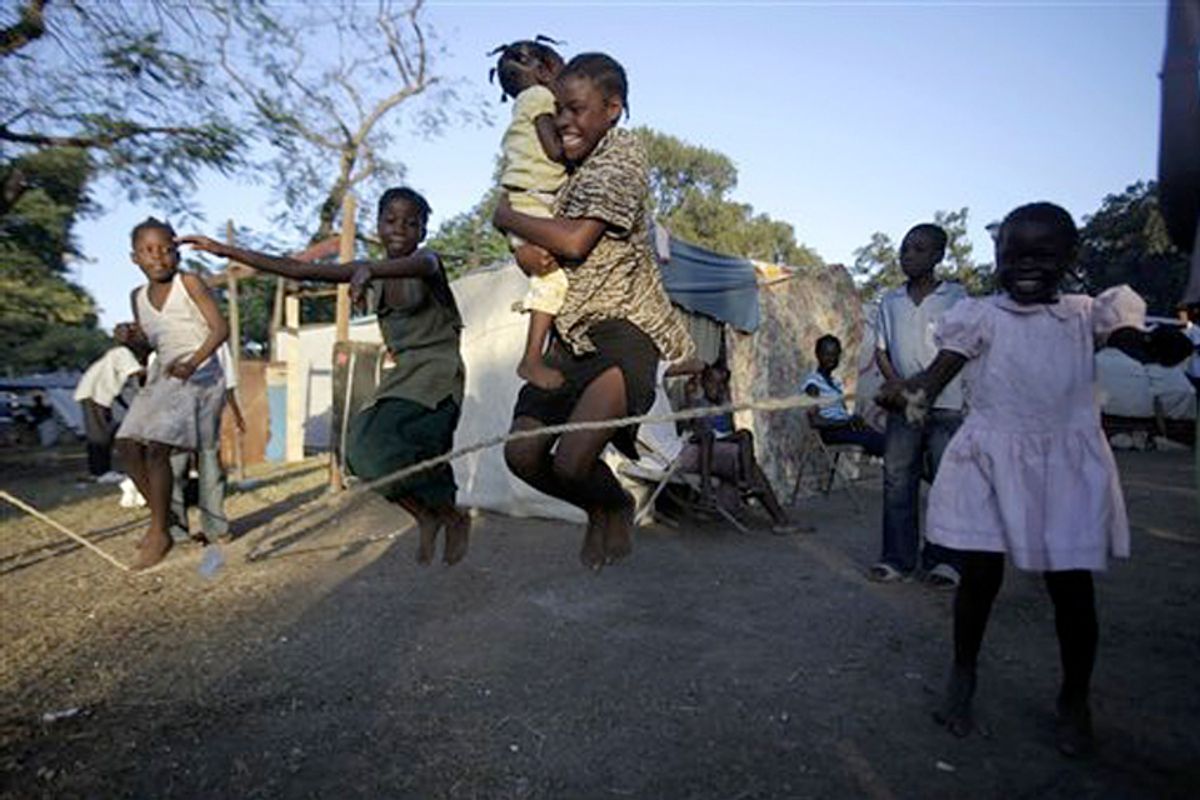 Girls play jump-rope at a makeshift camp in Port-au-Prince, Haiti, on Jan. 21.
--

One night, only days after an earthquake had leveled huge swaths of Haiti's capital, Port-au-Prince, and killed an estimated 200,000 people there and in its environs, I found myself cruising thorough the city on the back of a moto-taxi.

A crowded, dirty but also irrepressibly vibrant city during normal times, Port-au-Prince that night presented a landscape that could fairly be described as nightmarish.

Visible through the darkness, the ruined shells of buildings destroyed in the 7.0 quake looked over the fragile forms of hundreds of thousands of people reduced to sleeping in the streets, while in the air mingled the corrosive smell of burning garbage and the vomitous, cloyingly sweet stench of human decay.

A city I have sporadically called home since I first visited Haiti in 1997, and whose personality had become deeply ingrained in my soul, Port-au-Prince had never seemed more desperate or defeated.

Then something happened. Despite the terrible suffering that had been visited on this poor nation of 9 million people, it began to dawn on me that, along the streets that I knew so well, life was going on after this terrible trauma.

Next to the shell of Haiti's Palais National, the hypnotizingly white grand dame of the city's architectural jewels that successive Haitian politicians have fought to control even as their country grew ever-more impoverished and ruined, market women were still frying up marinade and fritay in old steel pots. In the Petionville market, despite the late hour and lack of electricity, goods and fried chicken were still being sold by the orange glow of kerosene lamps. By the following day, dozens of young Haitians had begun sweeping with brooms in front of the ruined Cathédrale Nationale, in preparation for the Saturday funeral on its grounds of Archbishop Serge Miot, who perished within its walls.

"I've worked with this moto for my entire youth," the driver, a young man named Emmanuel, told me that night as we headed up Avenue Pan American, passed the ruins of the United Nations compound where scores of United Nations workers, including mission chief Hédi Annabi, and his deputy, Luiz Carlos da Costa, lost their lives.

Everyone was hit. Now they sleep with Jesus.

Far from being the looting mobs that some media have portrayed them as, hardly anyone who has witnessed the response of the Haitians to this great catastrophe has not been moved by their incredible resilience and solidarity and their intact sense of humor in the face of an unimaginable tragedy.

As all the pillars of the Haitian state -- a state that has often seemed only able to rouse itself to parasitically victimize its own people when it did make its presence felt -- collapsed around them, the Haitians helped one another, dug through rubble, prayed, sang and showed everyone who has watched them what the meaning of true perseverance in the face of adversity looks like, even though the losses have been tremendous and irreplaceable.

Micha Gaillard, a university professor and son of one of Haiti's eminent historians, was one of the first political leaders I met while traveling to Haiti, and I recall him greeting me in his modest home in the Turgeau neighborhood as his charming wife, Katy, prepared us coffee. Katy passed away far too early a few years ago, and Micha died after the Palais de Justice collapsed on him, dying in what must have been agony after having been trapped for many hours. Three of the country's foremost feminist thinkers -- Myriam Merlet, Magalie Marcelin and Anne Marie Coriolan -- also died that day. The damage to the country's artistic heritage, from the almost-total collapse of the Episcopal Cathédrale Sainte Trinité, which boasted stunning indigenous murals by such eminent Haitian painters as Wilson Bigaud and Philome Obin, to the loss of much of the Nader art collection, probably the best private collection of Haitian art in the world, is incalculable.

Sometimes since I have returned to Haiti in the immediate aftermath of the earthquake, I have felt as if I would be overcome by despair. Looking at block after block of ruins throughout the capital's downtown, or seeing the terrible death and destruction caused by the collapse of the Université de Port-au-Prince, ringed by weeping, desperate relatives of those lost, one almost wants to turn away.

But the Haitians, always the Haitians, keep one going, and seeing their dignity in this moment has made me love them and their battered country as never before.

"Life goes on," a friend of mine who lost his wife in the earthquake told me yesterday, bringing to mind the famous Haitian proverb, deye mon gen mon. Beyond the mountains there are more mountains.

There is time to mourn a loss, and to bury the dead. More aid is needed, and more transparency and coordination to get it out to people, not just now but over the long term. But step by step, I believe that Haiti, a country of personal goodwill and stunning artistic accomplishment as much as it is a place of dysfunctional politics and venal politicians, will indeed rebuild. Perhaps differently than before, but a people who have suffered and endured so much seem, in my conversations with them on street corners under the blazing sun, in tent cities that have sprung up along the roadside, and in grievously affected provincial villages, to be able to withstand even this latest grievous shock and come back swinging.

I hope that we foreigners, who have been so moved by the place, treated so kindly and educated so patiently by its people, will be there to help. Haiti needs its friends now more than ever.

Michael Deibert is the author of "Notes From the Last Testament: The Struggle for Haiti."  He writes at www.michaeldeibert.blogspot.com.

Michael Deibert is a writer living in New York City. He last wrote for Salon about the 2000 elections in Haiti.