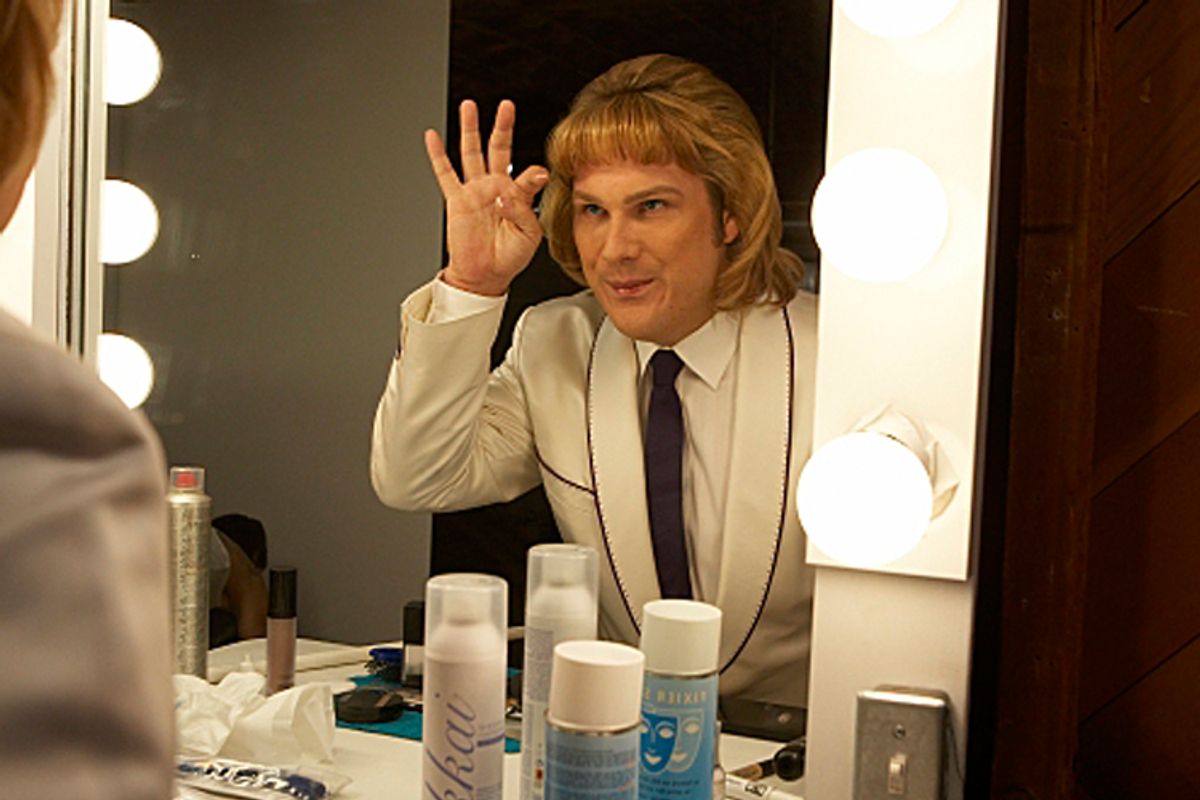 Over the last 50 years, the American dream has shifted from the tangible realm of grassy front lawns and modest bungalows to something far more aspirational and evanescent, the notion that we might transcend the slog of ordinary life with some hazy blend of creative self-involvement and champagne at Sundance. The unspoken promise of a million social networking tools is that, with the right connections, we could all live like Steven Spielberg, briefly delivering a few choice words of wisdom about -- what else? -- the contents of our glorious heads, before returning home to our immaculate, spacious, shining palaces on the hill.

Back in reality, creative professionals of every stripe are pegged with the word "aspiring" well past their prime. Told again and again that every step forward requires the kindness of strangers, they reach self-consciously through the Internets toward strangers (who are, themselves, perpetually "aspiring") whose best advice is that they must continue to reach out, without shame, to more strangers, and hope for more kindness. At the end of this yellow brick road, even success feels like it was cobbled together from a series of favors and failures. "How did you manage it?" kind strangers will ask you, but really, they're just about to ask for a favor themselves.

Meanwhile, an angelic choir of suited, earpiece-adorned agents and lawyers and executives chime in with a rousing chorus of "It's a big world after all!"

The American dream is just that, now: a dream. There's only one way to ascend to that precious realm of catered cocktails by a sparkling blue pool floating above an endless maze of smoggy auto body shops and El Pollo Locos: by using your powers of imagination.

Recognizing this odd moment in our history when creative success is something gaseous that depends on just the right conditions, then evaporates in seconds, comedian Marc Wootton, a more complicated, more perverse and arguably just as brilliant version of Sacha Baron Cohen, lands in Los Angeles armed with three tenacious alter egos poised to grab the zeitgeist by its skinny throat and choke the life out of it: Gary Garner, an aspiring actor/confused meathead with an unfortunate penchant for tedious anecdotes; Brendan Allen, an aspiring documentary filmmaker determined to bend inconvenient facts to his will to suit his narrative; and Shirley Ghostman, a psychic in a white suit who, when things go south, resorts to snapping in people's faces in order to put them in a trance. In Showtime's "La La Land" (premieres 11 p.m. Monday, Jan. 25) Wootton's three characters arrive in the promised land determined to make it, no matter what.

Along the way, Wootton's alter egos encounter a steady lineup of real human beings who tolerate their obnoxious, semi-repugnant behaviors for as long as they humanly can, presumably because they themselves are striving, the cameras are rolling, and to do otherwise might be unseemly. Just as Cohen uses Ali G, Bruno and Borat's awkwardness and "foreigner" status as a means of forcing random strangers into a state of extreme kindness, Wootton presents three characters who are made to draw out the peculiar mix of entertainment professionals, semi-professionals and miscellaneous secretly aspiring types who reside in L.A. and uniformly seem to clamor for a chance to join in the madness in front of any functioning camera.

With Wootton, though, the fun only lasts so long before things get very, very dark. Clad in an awful combination of lime-green too-small polo shirt, gray too-small Members Only jacket, and perpetually in-place Bluetooth earpiece, Wootton becomes actor Gary Garner, a guy who moves through the world with the graceless, lumbering, guffawing charms of a confused donkey. Wootton's meaty face and beady little eyes and the bizarre red crew cut and awful teeth he wears really work for him in this role, particularly when Gary offers to demonstrate his fine acting chops, which mostly consist of making a deliriously funny face best described as a rhesus monkey being shocked by a high-voltage current.

Even the ass-kissing bystanders of Los Angeles are horrified on the spot by Gary, but that doesn't stop them from begrudgingly playing along, starting with the former starlet Ruta Lee, that irrepressible variety of aging diva that floats through her photograph-and-memorabilia-cluttered house with a white feather boa around her shoulders, happy to wax philosophic on the business. Los Angeles is filled with women like Ruta, of course, but that doesn't make her any less charming, particularly when she's brusquely cutting Gary off mid-sentence and leveling with him, "You're a baby when it comes to this business!" And, "Your little facacta ideas don't mean anything!"

It's hard not to wonder how Wootton's producers found Lee or how she reacted when she discovered he was playing make-believe with her. In some ways, in fact, "La La Land" can feel, as Baron Cohen's show sometimes did, like a really smart version of "Punk'd" without the big reveal at the end. On the other hand, Wootton doesn't need a big reveal for him to have you on the floor, doubled over in pain, weeping into your carpet over the exquisite absurdity of what he pulls off with total strangers. Wootton dips as far into darkness as even Baron Cohen, but instead of merely relying on cursing and butt thongs to create comic gold, Wootton crafts a well-thought-out narrative and puts a few props in place before he meets his real-life characters.

Take Brendan Allen, who at first appears to be the least interesting of Wootton's three alter egos. Nothing can quite match the absurdity of this scene, in which Brendan explains to producer Jeff Schubert his intention to create a "Touching the Void"-style documentary about two climbers.

Brendan: Two guys, climbing buddies, they go up kind of an icy mountain, one of them takes a tumble. I'm close enough to get the cracks in the bones, the blood splattering on the lens, and they have to live off their own piss for a week.

Schubert: So this is scripted, right?

Schubert: So you would have to randomly wait and see someone die?

Brendan: Well, not necessarily die, because I think it would be nice if there were a nice upbeat ending, where maybe they get found at the last minute.

Schubert: But how would they be in this much peril, and it be on camera ...

Schubert: But, for the audience's sake, you know, you're going on this documentary to film these two guys climbing, oh by the way, one of them just happened to ...

Schubert: Right, it'll look like an accident. Boom, this is what just happened to happen, and boom, and then you're filming it ... (pause) That could work. Absolutely.

Before you can catch your breath from that stunning glimpse of Hollywood depravity, Brendan finds two climbers who are game to be filmed on one of their climbing trips, and they all set off for the day. Brendan explains, as they're driving in the car, that he likes to do his narration live. So, as the cameras roll, he murmurs ominously into the microphone, "There was nothing about the day that seemed out of the ordinary. Everything seemed perfectly fine. You could say eerily fine." One of the climbers, Bob, looks disturbed by this, but says nothing.

When they arrive at the climbing site, Brendan starts to anger the other climber, Tony, with his attempts to mold reality to fit his predetermined narrative.

Brendan: And would you say, your relationship with Bob, he's kind of guided you, he's helped you in a fatherly way?

Tony: No, he's not. You're wrong. This guy is seven or eight years older than me. We're almost the same age!

A few minutes later, things break down entirely and Tony storms off, at which point Brendan goes to Bob and tells him, "Can you calm him down? Talk to him as a dad to a son." And later: "He's your son, speak to him!"

After that, Brendan tries to patch things up with Bob by showing him his storyboards: "Look. You meet at the climbing store. You go climb. Look, if you just call him back, we can get this."

"But what's this? Let's take a look," Bob asks after catching a glimpse of a storyboard in which one of the climbers is depicted falling on his back and spurting blood, then drinking a bottle that has an arrow pointing to it that says "Own piss."

"No!" Allen says, covering that frame with his hand. "It just ends ... we can end with you climbing."

If I'm going into a lot of detail here, it's because this second episode of "La La Land," featuring Brendan Allen and the climbers, may be the single funniest thing I've seen on TV in the past year. For Wootton to take one of the world's most odious and repugnant archetypes -- the self-important documentary filmmaker -- and then capture the insanity as we watch him force reality to fit his story arc?

It's just too rich. And as clear as it is that, unlike Borat or Bruno, Brendan Allen is the guy you're supposed to really loathe in this picture, once the park rangers arrive and it looks like Brendan and his camera lady (Kiki, an exotic dancer who isn't in on the joke but appears willing to cut the climbers' ropes for the sake of Brendan's documentary) might end up in jail, it's hard not to wonder if Marc Wootton himself isn't some kind of evil provocateur, if not an outright sociopath.

I spoke with Wootton on the phone in order to find out (the interview will appear after readers have had a chance to see a few episodes of the show) and, well, he seems like a very nice guy, actually. Also, as good as he is at pulling people in, stringing them along, engaging them and, in some cases, tormenting them until they can't take it anymore, he does seem to aim his worst stunts at people, from volunteer border patrol to so-called psychics to proselytizing actors, who truly deserve to be grilled as the cameras roll. And where in the world but L.A. can you find such a delicious assortment of industry types who cry out for some uncomfortable but ultimately harmless hazing?

Most of all, "La La Land" captures the jackassery inherent to striving. None of us are above it, after all. When Gary Garner grits his gigantic teeth and looms awkwardly by the bar at a networking party or Shirley Ghostman makes queasily bad small talk at a casting call for psychics, we laugh out loud, but we recall that humbling moment where we reached for our business cards with wobbly hands, or tapped out our latest thin-veiled self-promotional drivel on Twitter. We're a nation of strivers whose secret dreams amount to a nowhere land of smoke and mirrors, a steady succession of favors and failures, pointless aspiration without end, Amen. Or, as Garner puts it, "I'm Gary Garner, the best actor in the world, ever. Bish bash bosh!"