The epic becomes the second highest grossing film in the U.S., while "Legion's" fallen angel soars to strong finish 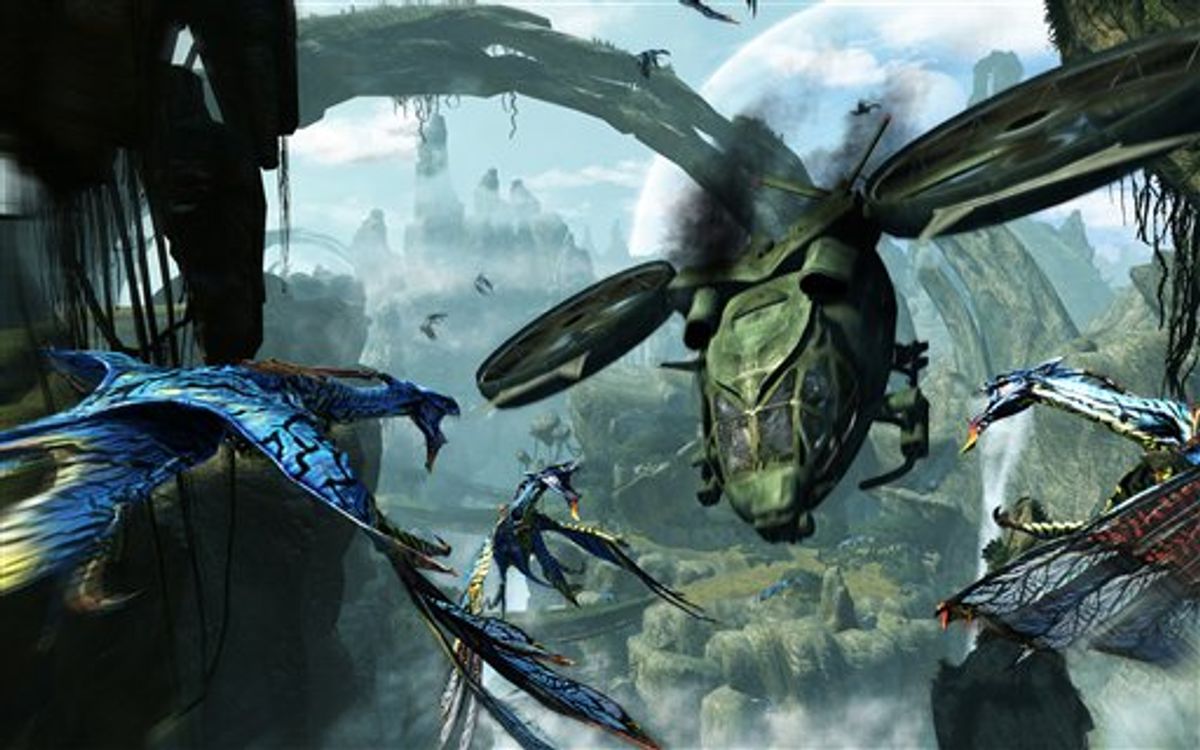 In this video game image released by Ubisoft, a scene is shown from "Avatar:The Game." (AP Photo/Ubisoft) (AP)
--

It was business as usual this weekend, with "Avatar" again leading the pack and a well-marketed newcomer fairing well in number two. There was a genuine Golden Globes bump this weekend, with all of the big winners showing much smaller drops than last weekend. Still, the story again is all about "Avatar." The big engine that could crossed dropped just 16 percent in its sixth weekend, taking in $36 million for a record sixth weekend ("Titanic" had the previous sixth-weekend record with $25 million). Its new domestic total is $552 million. Yup, it crossed $533 million sometime yesterday afternoon, so it has now surpassed "The Dark Knight" as the second-highest grossing film in the U.S. And there's a pretty decent chance that it will close out the month of January by toppling "Titanic’s" $600.7 million record. Internationally, at $1.836 billion, it's just a skip and a jump away from "Titanic’s" seemingly insurmountable $1.842 billion worldwide record. Wow... just wow.

Where it goes from there is dependent on how well it's represented at the Oscars and how many 3D screens it can keep when "Alice in Wonderland" opens on March 5, the very weekend that "Avatar" may be pulling an Oscar sweep. Tim Burton's "Alice in Wonderland" will take each and every IMAX screen and most of the 3D screens. How ironic that "Avatar" will finally take a massive box office hit on the very weekend it (most likely) sweeps the Oscars. The biggest film of all time is more or less a limited engagement as a result. Still, I'd be surprised to not see some IMAX screens holding midnight "Avatar" showings after the first weekend of the Burton quasi-sequel. On the plus side, if "Alice in Wonderland" under-performs (not likely), then Fox may have some leveraging power to return "Avatar" to some of its 3D screens come March 12. Of course, there is a steady stream of IMAX and/or 3D releases from March 5 on out, with "How to Train Your Dragon", possibly "Clash of the Titans" (Warner is considering 3D and a date switch to April 2 for the somewhat finished film), "Hubble 3D" and eventually "Iron Man 2" for the next two months. It's a strange situation (a mega blockbuster being kneecapped by screen losses caused not by lack of grosses but by contractual obligation), but one that most studios would envy.

The big new opener of the weekend was another well-marketed Sony Screen Gems horror picture, "Legion." With a saturation-level print campaign, a compelling trailer, and an easy-to-explain concept (fallen angel sides with humanity when God turns wrathful), this one pulled in $18 million for a solid number two finish. I'm sure the religious angle didn't hurt either, as religious horror films often pull in the kind of crowds who wouldn't otherwise be caught dead at a horror picture (i.e., the $33 million opening of "The Exorcism of Emily Rose"). Ironically, this Paul Bettany God-power horror flick opened on the same weekend as his poorly-received Charles Darwin biopic, "Creation." The latter film opened on seven screens for a total gross of $52,000 (a poor $7,429 per screen average). Facing direct demo competition, the also somewhat spiritual "The Book of Eli" tumbled a slightly higher-than-expected 48 percent, grossing $17 million and ending day 10 with an otherwise solid $62 million. $100 million is still a possibility for the Denzel Washington end-of-the-world action flick, but it will easily reach its $80 million budget regardless.

The next opener was Dwayne Johnson's "The Tooth Fairy." The $14.5 million opening wasn't a disaster, but it's tragically his second-lowest opening weekend, behind only "The Gridiron Gang's" $14.4 million. Whether boys were just turned off by posters showing off The Rock in fairy wings, or whether the trailers wrongly sold cheap gags instead of an actual story, this family comedy didn't play nearly as well as "The Game Plan." Still, this one only cost $48 million, so it'll be just fine in the long run. Oh well, maybe next time he has a movie to promote, he'll just do what he does best, which is host "Saturday Night Live." Our country needs The Rock Obama now more than ever. Peter Jackson's "The Lovely Bones" dropped 48 percent in its second weekend of wide-release, with a $8.8 million second-weekend and a $31.6 million domestic total. It's not a spectacular total, but Paramount should be commended for avoiding complete catastrophe for this very expensive Oscar-bait that wasn't. Hopefully it can get a decent boost from Stanley Tucci's (deserved) Oscar nomination in a couple weeks, which will likely be the film's only nomination.

The final major opener was "Extraordinary Measures." The CBS Film's debut parlayed lousy reviews and a marketing campaign that made the picture look like a cheap made-for-TV movie into an opening weekend of just $7 million. Both actors (Harrison Ford and Brendan Fraser) were coming off major hits (Ford's "Indiana Jones and the Kingdom of the Crystal Skull" and Fraser's "The Mummy: Curse of the Dragon Emperor" and "Journey to the Center of the Earth 3D"), so this has to be a come down even for a project that is well outside their comfort zone. Weep not for either of them. Harrison Ford has the buzzed-about comedy (something he should have been doing for ages) "Morning Glory" opening in July (it teams him with Rachel McAdams, Jeff Goldblum and Diane Keaton). Brendan Fraser has "Furry Vengeance" for April 2, which is an animals and kids fantasy comedy that is right in his safe zone. Weep instead for CBS Films, which inexplicably spent $50 million making and marketing something that should have cost under $20 million.

Next we once again discuss the Christmas Three. "Sherlock Holmes" was aided by Robert Downey Jr's inexplicable Golden Globes win (great speech though), as the film fell just 28 percent despite losing 500 screens for a new total of $191 million. It will cross $200 million next weekend, so best of luck on the sequel. Crossing $200 million this weekend was "Alvin and the Chipmunks II", which ended the weekend with $204 million. Both are going ever-higher on the "biggest films never to be number 01 list." Crossing $100 million in the next couple days will be "It's Complicated" and "The Princess and the Frog," which ended their weekends with $98 million and $99 million respectively. "It's Complicated" fell just 23 percent, implying that those who wanted to see Golden Globe winner Meryl Streep in theaters chose the available film over the actual winning movie that's been on DVD for months.

Golden Globe, SAG winner and now-presumptive Oscar front-runner Sandra Bullock saw "The Blind Side" drop just 20 percent in its 10th weekend, with a new total of $234 million. It will soon surpass "My Big Fat Greek Wedding" ($241 million) as the biggest-grossing film that is a female star vehicle. "Up in the Air" (down 18 percent) will cross the $70 million mark in the next few days, and it has a decent shot at $100 million if it can score a major Oscar victory come March. As of now, it's already the seventh-highest grossing film to never reach the top five on any given weekend, and it could reach number one for that milestone when it's finished. "Crazy Heart" capitalized on Jeff Bridges's Golden Globe and SAG win, expanding to 93 screens and earning over $15,000 per screen. The country music drama has now earned $3.9 million and should see a slow and steady upswing as Jeff Bridges marches toward his (at-long-last) Oscar win. As usual, the rest of the list is filled with Oscar contenders that are struggling to survive in limited release ("An Education", "A Single Man", "Broken Embraces", "The Young Victoria"), and good luck to all of them.

That's it for this weekend. Next weekend has the high-profile return of Mel Gibson, as action-god Martin Campbell ("Goldeneye," "Mask of Zorro," "Casino Royale," "Green Lantern") remakes his 1980s BBC miniseries "Edge of Darkness." Also opening wide is the Kristen Bell/Josh Duhamel romantic comedy, "When in Rome," which boasts the least appealing marketing campaign in recent memory (crappy trailer + creepy poster = not promising). Thanks to my love for all things Campbell (the guy directed "Homicide: Life on the Street’s" "Three Men and Adena" for goodness sake), count me as one Jewish moviegoer who's excited to see Mel Gibson's acting comeback.