"I.O.U.: Why Everyone Owes Everyone and No One Can Pay" 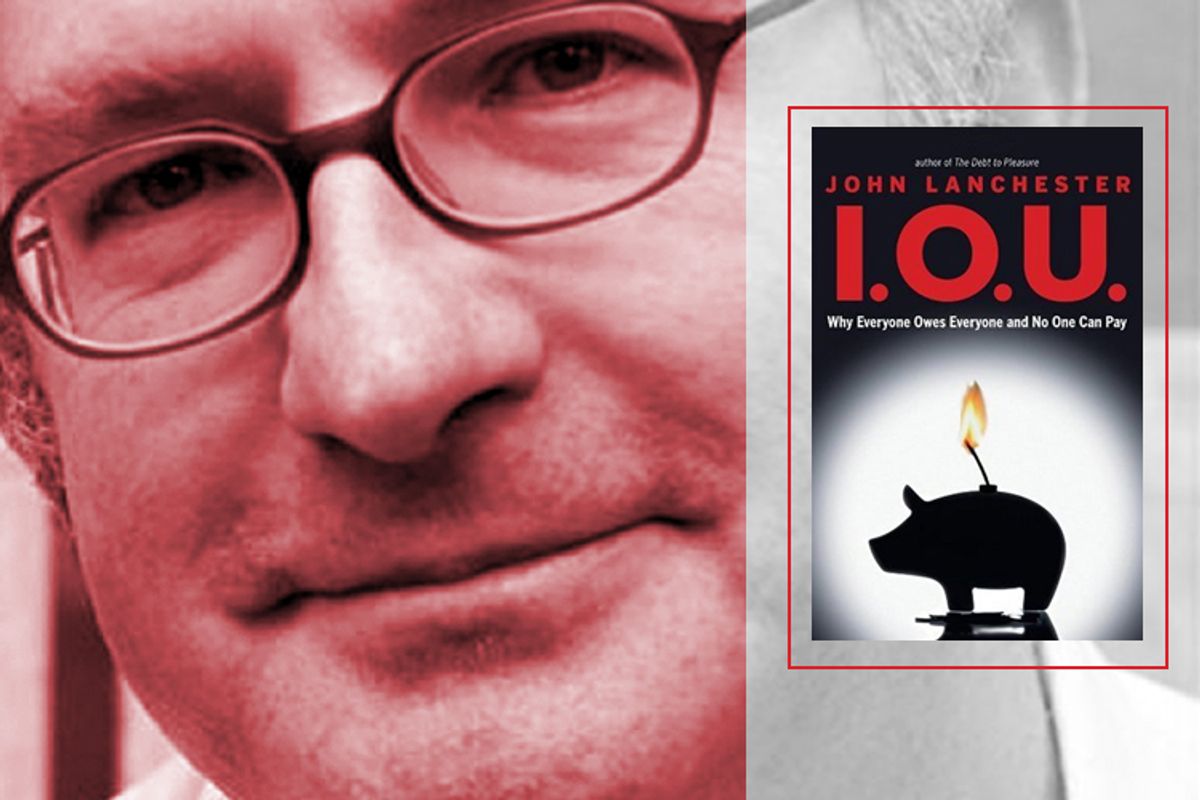 The curious thing about money is that as much as we covet it, obsess about it and chase after it, most of us have a hard time understanding it. At any level above a basic household budget, money becomes an abstraction swimming in a sea of acronyms, operating according to laws harder to fathom than the fundamentals of theoretical physics. Quite a few of the people in charge of managing money at that level -- for the sake of simplicity, let's just call them bankers -- don't understand the more complex and immaterial financial products they deal in; that's one of the many underlying causes of the current economic crisis.

If bankers don't know exactly how collateralized debt obligations and the like operate, what hope is there for us civilians? While there are many new books about the crash of 2008 and the government's attempts to clean it up (Andrew Ross Sorkin's "Too Big to Fail" is probably the best-known), most focus on blow-by-blow, name-and-date-heavy narratives of the collapse that can be hard to parse if you're confused by the difference between equity and equities. That's because these books are written by business journalists who, while they know a lot about the story and the players, are also accustomed to writing for a readership of initiates.

When the public radio show "This American Life" produced an episode designed to explain the subprime mortgage mess to its lay audience ("The Giant Pool of Money"), the program quickly went viral, generating 10 times the usual amount of listener feedback, winning Polk and Peabody Awards, and spawning three more explanatory episodes on the economy as well as a daily podcast ("Planet Money"). Now there's a reader's equivalent of "The Giant Pool of Money" in John Lanchester's "I.O.U.: Why Everyone Owes Everyone and No One Can Pay"

-- witty, lucid, solicitous of the average person's difficulty in grasping the conceptual underpinnings of international finance and minus the faux naiveté that can sometimes make "This American Life" a bit trying.

Lanchester is a British journalist and Whitbread-winning novelist ("The Debt to Pleasure") who began researching the finance industry a couple of years ago as background for a novel. Consequently, this is surely the only book on the crisis to name-check Anthony Powell and E.L. Doctorow, or to compare the status of value in finance capital to that of meaning in deconstructionist theory: "meaning can never be precisely located; instead, it is always 'deferred,' moved elsewhere, located in other meanings, which refer and defer to other meanings."

OK, maybe that's not the most encouraging example -- using one incomprehensible body of thought to shed light on another -- but the analogy is illuminating all the same. Like deconstructionism, finance is as much a frame of mind as a set of ideas; once you work your way in deep enough to feel like you've got the lay of the land, you've already begun to go native. Lanchester manages to know enough to explain the terrain clearly and yet he never loses his perspective. And most of his metaphors are considerably more down-to-earth. Of credit default swaps, an invention designed to spread the risk of lending around and ironically a major factor in the collapse, he writes, "It's as if people had used the invention of seat belts as an opportunity to take up drunk driving." His chapter on the failure of government regulators to restrain the excesses of the banks is titled "Funny Smells." That's his nickname for all the ominous signs officials chose to ignore, including Madoff-style promises that were too good to be true, which constitute "a critically important category of funny smells." (In addition to those literary references, this is also the only book on the crisis likely to make you snort with laughter on the crosstown bus.)

I could not possibly be more adept than Lanchester at summing up derivatives, subprime mortgage-based securities and the functions of the bond market, let alone succeed at summing up his summings up. Suffice to say that by Page 164 of this admirably concise book, Lanchester quotes, at length and with his own asides, from a statement made by former Fed chairman Alan Greenspan to the House Committee on Oversight and Government Reform, noting "my hope is that by this point in the book, you'll be able to understand him." That's a tall order when you're talking about the notoriously mandarin Greenspan and a testimony that includes lines like "Pressures on lenders to supply more 'paper' collapsed subprime underwriting standards from 2005 forward." Yet, sure enough, I understood every word.

After this success, Lanchester had me in the palm of his hand, and so I will relay his concluding opinions with the sort of slavish acceptance that Greenspan once commanded from financial professionals. He maintains that the credit crunch we're currently suffering has its roots in a "climate" (the unfettered explosion of post-Cold War free-market capitalism), a problem (the generation of subprime mortgages as fuel for that explosion), a mistake (bankers' faith in new mathematical models of risk despite ample proof that those models were simply wrong) and a failure (by regulators, to stop them). He doesn't buy Greenspan's effort to palm responsibility off on Chinese investment in the U.S., since the European Union and the U.K. also had "a doozy of a bubble" without any help from China. Among other things, Lanchester advocates dividing commercial from investment banking, as President Obama has recently urged.

Perhaps the most trenchant passages of "I.O.U." have to do with the character of finance culture. An outsider from an almost quaintly self-reflective profession, Lanchester has friends who work in "the City" (Britain's financial sector, roughly the equivalent of Wall Street) whom he likes well enough. "But there is sometimes a moment in talking to them when you hit a kind of wall. It's usually to do with fundamental assumptions based on the primacy of money and the nonreality of other schemes of value." This goes a long way toward explaining the clueless arrogance that CEOs frequently exhibit when suddenly shifted into the public spotlight. "One of the peculiar things about the world of finance," Lanchester writes, "is that it freely offers the sensation of being proved right to its participants ... One of our culture's deepest beliefs is expressed in the question 'If you're so smart, why ain't you rich?' But people in finance are rich -- so it logically follows that everything they choose to do must be smart."

This delusional belief in their own infallibility, fostered within "the insulating bubble of money and the comforting security of the cult," led these smart people to do things that seem manifestly stupid to those of us standing outside. It wasn't just that the system happened to go wrong, it was, in Lanchester's words, "certain to go wrong." And yet so many of them never saw it coming. At the moment, the public is angry enough, and suffering enough, to get in the faces of those responsible and remind them just how foolish they've been. But the reality is that, most of the time, most of us were and are all too willing to concur with the rich = smart equation. We too readily bought into "the nonreality of other schemes of value." We may not all be able to master the finer points of derivatives, but we do have a say in what our society decides to respect, admire and cherish.

Books Our Picks U.s. Economy Wall Street What To Read