Should Focus on the Family's anti-choice message interrupt the biggest night in sports? 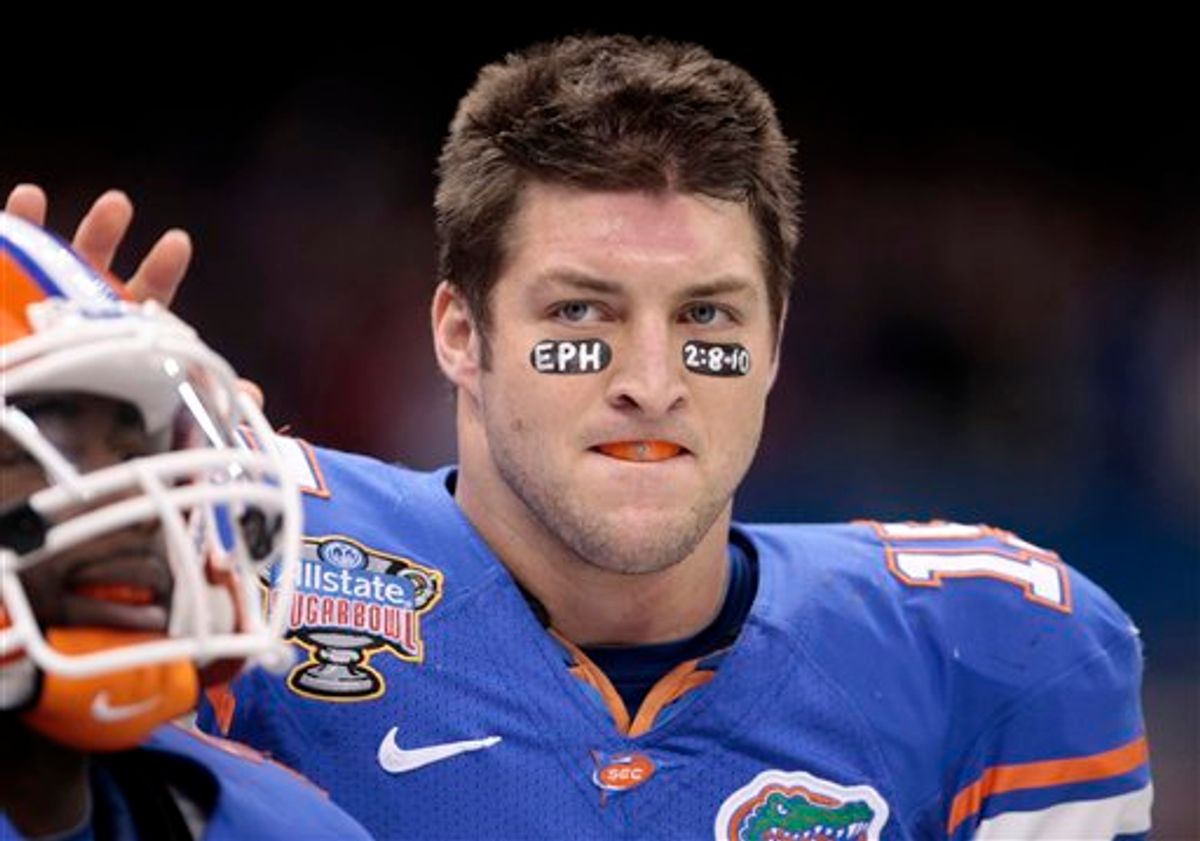 FILE - In this Jan. 1, 2010 photo, Florida quarterback Tim Tebow stands on the sidelines during the Sugar Bowl football game at the Louisiana Superdome in New Orleans. A national coalition of women's groups on Monday, Jan. 25, 2010, called on CBS to scrap its plan to broadcast an ad during the Super Bowl featuring college football star Tim Tebow and his mother which critics say is likely to convey an anti-abortion message. (AP Photo/Dave Martin) (AP)
--

The Super Bowl XLIV is still 12 days away, but a pre-game showdown has already begun between pro- and anti-choice activists. Focus on the Family, that paragon of "righteous" bigotry, has landed a coveted 30-second TV spot during the game that is expected to deliver an anti-abortion message, and the Women's Media Center, with the support of several reproductive rights organizations, has kicked off a campaign for CBS to ban the ad.

Here's what we know so far about the ad: It features star college quarterback Tim Tebow and his mother, Pam, sharing "a personal story centered on the theme of 'Celebrate Family, Celebrate Life,'" according to a Focus on the Family press release. It's safe to assume the spot will tell the story of how Tebow's mom fell ill during her pregnancy but refused doctors' advice that she have an abortion for her own safety. Luckily enough, she gave birth to a healthy baby boy and future Heisman Trophy-winner. Tebow only confirmed suspicions that the ad takes this tack when the controversy was raised at a recent press conference: "I've always been very convicted of it" -- presumably his antiabortion view -- "because that's the reason I'm here, because my mom was a very courageous woman."

Assuming this is an explicitly antiabortion advertisement, should it be banned? Frankly, my first inclination is to say no. After all, I'm a big believer in free speech, and if Focus on the Family wants to throw down anywhere from $2.5 million to $2.8 million on a Super Bowl spot, so be it. Only, while I'm no fan of censorship, I am a fan of consistency, and in the past CBS has banned Super Bowl ads with ideological bents. In 2004, the network turned away a United Church of Christ advertisement welcoming gay parishioners and explained that it had "a longstanding policy of not accepting advocacy advertising." However, it seems CBS may be changing that long-standing policy. A spokesperson e-mailed the following statement:

We have for some time moderated our approach to advocacy submissions after it became apparent that our stance did not reflect public sentiment or industry norms on the issue. In fact, most media outlets have accepted advocacy ads for some time.

Just last year, however, NBC rejected a spot from CatholicVote.org, which begged us to imagine if President Barack Obama's mother had aborted him simply because he would be raised in "a broken home," "abandoned by his father" and raised by a single mother. (By the way, there is no evidence that Obama's mother ever considered aborting him -- but, pshh, facts.) No matter the network, the Super Bowl has a long record of rejecting advocacy ads, and for good reason: On the biggest sporting night of the year, people want their Doritos, Bud Light and Pepsi commercials, not propaganda.

A Focus on the Family spokesperson told the Washington Post that the ad isn't overtly political, but a petition by the Women's Media Center argues otherwise: "By offering one of the most coveted advertising spots of the year to an anti-equality, anti-choice, homophobic organization, CBS is aligning itself with a political stance that will damage its reputation, alienate viewers, and discourage consumers from supporting its shows and advertisers." There is no denying the organization's founder, James Dobson, is about as polarizing a political figure as they come.

Setting aside CBS' inconsistency and the larger debate about policing Super Bowl ads, we're left with Tebow's story. It's a heartwarming one -- his mother wanted him, she risked her life for him and both survived. No part of me wants to prevent women from hearing that story; being pro-choice means fully educating women about the potential outcomes of their decision -- including,  yes, the slim possibility that against doctors' best predictions a woman and her baby survive a life-threatening pregnancy. But that isn't the whole story, and in Focus on the Family's hands it will likely be used to manipulate, not to educate; the organization isn't just antiabortion but anti-choice, after all. Here's hoping against all reason that the ad doesn't present the exception to the rule (e.g., Barack Obama, a miracle birth) as the rule by which women should -- no, must -- live by.