Either Obama is dooming the economy to placate deficit hawks, or he's pretending to freeze non-defense spending 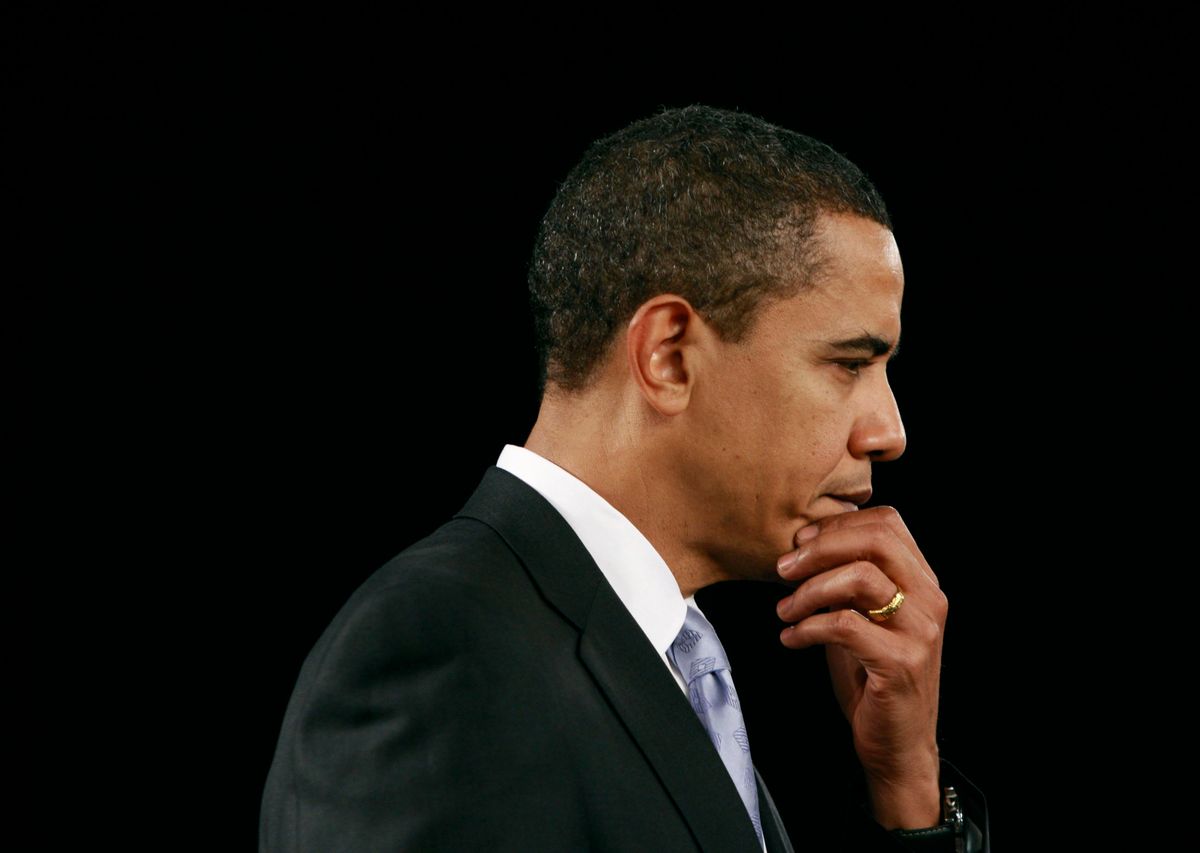 U.S. President Barack Obama is pictured during a town hall meeting in Fort Myers, Florida February 10, 2009. Obama hailed the Senate's approval of an $838 billion economic stimulus package on Tuesday, but said more work remained to get the legislation to his desk for his signature. REUTERS/Jason Reed (UNITED STATES) (Reuters)
--

(Updated with Paul Krugman's latest, below)

Don't tell Republicans about Monday night's Rachel Maddow Show, where progressive economist Jared Bernstein, who works for Vice President Joe Biden, reassured Maddow that the controversial "spending freeze" the Obama administration just leaked wouldn't apply to many important social programs, at all. (You can watch it below.)

Maddow made the same point Robert Reich and Andrew Leonard did on Salon: Imposing a spending freeze during economic hard times is felony stupid.  It's Roosevelt in '37. Bernstein quickly reassured Maddow she'd gotten her facts wrong: The administration will cut some programs, Bernstein said, but they'll increase funding for others. The freeze wouldn't apply to health care programs, the already passed stimulus, and certainly not to the package of middle class assistance programs Obama and Biden released the same day, Bernstein insisted.

But wasn't just the Maddow show; apparently Obama advisors briefed the liberal blogosphere to reassure folks that this freeze won't hurt at all. As Marc Ambinder explains:

"The freeze is irrelevant to health care because Medicare, Medicaid and taxes are all mandatory. So too are many of the programs for the neediest, such as unemployment insurance and Pell Grants. And many of the other programs were plussed up recently so the White House is freezing them at a very high level. A second stimulus package wouldn't be included either."

So who do they think they're fooling? If they're telling the truth, and dozens of social programs will be exempt from the freeze, or even increased -- hey, we can even pass a second stimulus! -- then why is Obama selling what he's doing as a freeze? To win Republican support? Not gonna happen. To make Evan Bayh happy? (The freeze is exactly what Bayh recommended to Bloomberg's Al Hunt on Friday.) Who cares?

And do they think all Republicans are stupid and/or completely cut off from the liberal blogosphere, so they won't learn that this is just a pretend freeze, that will let Democrats grow social spending for their priorities? Bernstein said it would let Obama cut "wasteful spending" and thwart the lobbyists who defend every imaginable government program. Really? If everyone knows the freeze isn't real, and it's just about proving your program is important to the recovery or health care or some other protected priority, it will be a lobbyists' free for all anyway.

This charade is almost worse than if Obama was dead serious about an across the board freeze. Both Michael Lind, on Salon, and Matt Yglesias at Think Progress have suggested that Obama is trying to win over Republicans by picking a fight with the left (um, doesn't he already have one?) and the denunciations by people like Maddow and Robert Reich play perfectly into their trap. If they're right, Obama's having his Sister Soulja moment--and tonight the role of "Sister" will be played by folks like Maddow and Reich, who supported him. Nice!

All this occurred on David Plouffe's first day back in the inner circle (another inscrutable messaging campaign by the White House: He's been here all along, this is no big deal! He's coming back to save us, it's a big deal!) Politics can't help Obama when the problem is policy, and his letting Republicans and conservative Democrats block the change he campaigned on. Either way: Welcome back, David Plouffe. Oooof.

Update: Under the headline "Obama liquidates himself," Paul Krugman blasts the president:

"It’s appalling on every level.

"It’s bad economics, depressing demand when the economy is still suffering from mass unemployment....It’s bad long-run fiscal policy, shifting attention away from the essential need to reform health care and focusing on small change instead....

"And it’s a betrayal of everything Obama’s supporters thought they were working for. Just like that, Obama has embraced and validated the Republican world-view — and more specifically, he has embraced the policy ideas of the man he defeated in 2008. A correspondent writes, 'I feel like an idiot for supporting this guy.'"

And The Economist says more or less the same thing I do here (only with more elegance and the British spelling of "infantilization," as in "infantilisation of the electorate.") The headline: "President Obama admits defeat."

Here's Jared Bernstein trying, and failing, to talk Maddow down: