What a bunch of boobs

Those "expert" bra fitters hyped by Oprah and women's mags turn out to be not so accurate. No surprise for this 34H 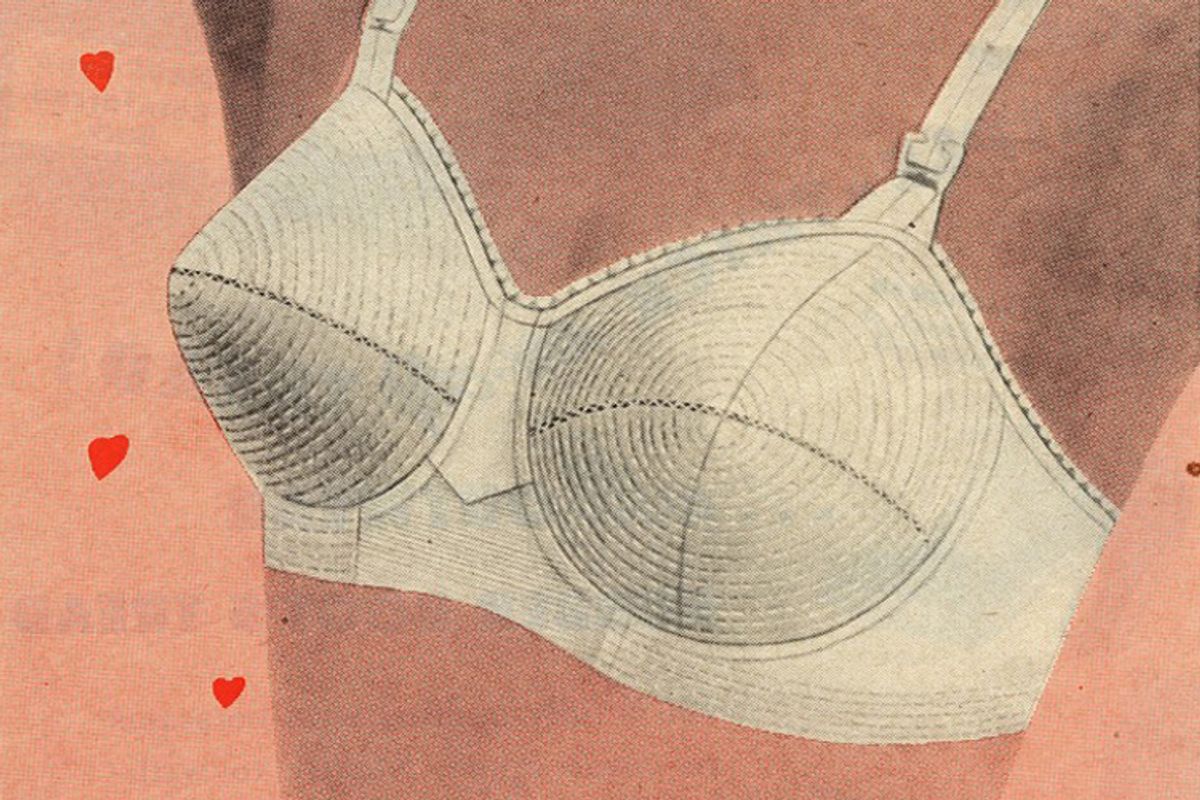 Did you know that something like 85 percent of women are wearing the wrong size bra? Yes, you probably did, because Oprah and women's magazines and makeover reality shows and even mainstream newspapers have all been beating that drum for years. Like getting dressed and eating food, choosing a bra has become something only the foolish attempt without expert supervision. Browse the Target lingerie section at your peril, ladies; the only way to be sure you're not unwittingly looking 10 pounds fatter and possibly setting yourself up for permanent back problems is to go to a specialty store where nothing costs less than $50, invite a stranger to fondle your breasts, and take her word for what size you really are. Even if, as the Telegraph has recently reported, that specialty-store employee has no idea either.

Before we proceed, let me tell you a little about my boobs. Like Broadsheet editor Sarah Hepola (who wrote about her bra fitting for Salon a few years ago), I currently wear a "34 ridiculous" (H, actually) -- so before the internet brought me a glorious smorgasbord of lingerie retailers with inventories as huge as my rack, my options were squeezing into the one 34DDD minimizer Macy's carried at any given time, or going to one of those specialty stores, permitting a stranger to feel me up, and paying between $85 and $200 per bra for the pleasure.

And while I'm deeply grateful that specialty lingerie stores exist at all, here's the problem: About 50 percent of the time, the "expert" -- who insists that women never know their true size, because she watches Oprah, too -- eyeballs me at a larger band and smaller cup size than I claim. I suspect this happens because, despite what my bra size suggests, I am not built like a porn star: I'm a short, fat chick who happens to have a surprisingly small frame, which means the "experts" frequently assume I'm delusional until I try on every freakin' bra in the store and eventually demonstrate that yes, 34 ridiculous is the correct size. Worse yet, once when I told a saleswoman that a larger band size just rides up my back -- which anyone who's read one of those "85 percent of women" articles can tell you means it's too big -- she replied, "Well, that means it's too small!" I was dumbfounded. This woman was A) telling me something that's the opposite of true, B) trying to sell me an even bigger band to solve the problem of a too-big band, and C) most disturbingly, the "expert" in this transaction. To insist on my proper size was to challenge the authority of an Expert Fitter and be judged as just one more woman too incompetent to figure out what size bra she wears.

Which, of course, is exactly what I did, but... awkward. And not the first time I've been hassled at a store like that for having the gall to say that, yeah, after 20-odd years of living with these breasts, I actually do have a pretty good idea of what size bra will hold them up without causing back pain or quadriboobage, and although I might be a little off or a different size in different brands (sizing above a DD is notoriously inconsistent), maybe we could start there instead of with your assumptions? I've heard even worse stories about mainstream retailers that only sell lingerie as an afterthought, where "expert fitters" will authoritatively wrap a tape measure around your chest, then keep trying DDs with larger and larger bands, rather than admit that they simply don't carry your cup size. So I was not at all surprised to read that large-busted secret shoppers working for UK consumer watchdog Which? recently found that out of 70 stores offering supposedly expert bra fittings, not one did the job well enough to earn a recommendation. "Some of the women were sold wildly different sizes by different shops, in one case this varied by seven sizes from a 34FF to 40D. Another was sold the same bra in two House of Fraser branches, but in sizes 34C and 34F. Both were deemed a terrible fit." Says Which? spokesperson Jenny Driscoll, "If stores are going to offer this service they need to up their game: do it properly or don't do it at all."

And if women's lifestyle gurus are going to keep insisting that 85 percent of grown women don't know how to dress ourselves properly, they need to make sure that the "experts" they send us to for advice actually know what they're doing; fancy-store bras -- especially if you wear larger than a DD cup -- don't come cheap, and aren't returnable once you've worn them long enough to know if they're wearable. Even Hepola, for whom being professionally fitted was a revelation, suffered buyer's remorse. She called me this morning to offer an update to her 2007 story: One of the $100 bras she bought was too uncomfortable to wear for longer than 5 minutes. "I don't mind spending $20 on a bra that doesn't really fit," she said, "But that sucked." Dude, I know. The first time I was professionally fitted, I bought a lovely bra that did amazing things for my boobs but had such a heavy pattern embroidered on it, I couldn't wear it under anything thinner than a fisherman's sweater. These aren't problems you anticipate while standing half-naked in a dressing room with a stranger who just finished squeezing your tits and is now exclaiming, "Look how gorgeous!" And when you've been told that this person is an expert in sizing, you really don't anticipate that there will be a problem with the fit of your new three-figure bra.

This isn't to say that professional bra fittings are a waste of time; I never would have learned that anything beyond that one 34DDD at Macy's existed if I hadn't gone for one years ago. Hepola never would have learned what cup size corresponds to "pain in the ass" if she hadn't. But like so many other services the Women's Insecurity Industry tells us we shouldn't risk trying to handle ourselves, bra fitting is now offered by everyone from committed professionals to poorly trained teenagers to charlatans whose primary goal is to send you away with the most expensive product. And like so many other services, the best way to find the good ones is to ask people you trust, then trust your own judgment when you get there. A friend of mine swears that Intimacy ("aka That Place Where They Send Chesty Ladies on What Not to Wear") changed her life, so when I needed new bras recently, I headed there. When I told the fitter I'm pretty sure I wear a 34H, instead of raising an eyebrow and trying to find a delicate way to ask if I'm aware that I'm fat, she said, "Ah, you know what you're doing. Anyone who says something above 'DD' has done this before." I liked her immediately, and only liked her more when she said things like, "The only way to find out what fits best is to try a bunch on" and "If it's not comfortable, don't buy it." An illusion of expertise is nice, but demonstrable common sense is even better.