"Jersey Shore": The wisdom of Snooki

Like Chance the Gardener from "Being There," MTV's reality star offers timeless insights into the human condition 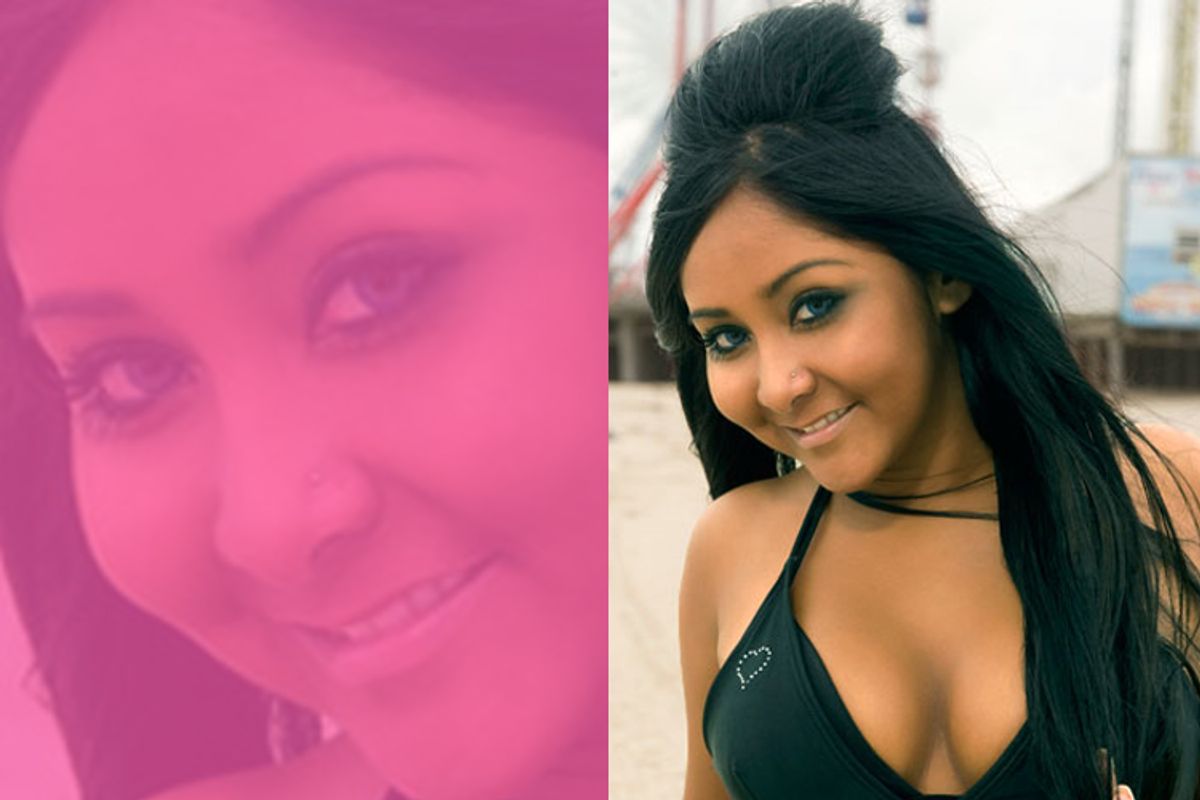 At first glance, Nicole "Snooki" Polizzi looks like just another unseemly glob of dimwitted detritus to wash up on our pop cultural shores during this depraved time. How did this odd human being, with her disturbing gigantic bouffant and her black-studded clothing and her enormous hoop earings, how did this person who walks around making unhinged sounds about partying and guidos and Poughkeepsie, become a household name? How is it possible that the tabloids are actually following the star of MTV's "Jersey Shore" around, taking pictures of her, like anyone cares? How do we live in a world where this strange creature is slated to report live for MTV from the red carpet at the Grammys?

Assuming that I must be missing something, I took a closer look at this phenomenon that answers to the name of "Snooki." Imagine my delight in discovering that every single word out of Snooki's mouth is rich with metaphor! Remember Peter Sellers' simple-minded gardener, Chance, in the 1979 comedy "Being There," whose statements ("As long as the roots are not severed, all is well") were revealed to be cunning explorations of larger philosophical and socioeconomic themes? Snooki is just like that, but with bigger hair.

So cringe not, my friends, when you spot this woman's enormous orange head on your TV screens. Instead, go forth and spread the word of Snooki!

Snookism: When I woke up, I was like, "What did I do last night? Like what did I do?" I fucked up. Story of my life.

Real meaning: Without the glow of nostalgia, our lives amount to little more than a series of pointless foibles.

Snookism: My ultimate dream is to move to Jersey, find a nice, juiced, hot, tanned guy and live my life.

Real meaning: Lower your expectations and your dreams may come true.

Snookism: I am a princess at home, like, I am the fucking princess of fucking Poughkeepsie. Here, I am nobody. I'm, like, emotionally exhausted.

Real meaning: Seize the day or surrender your mortal flesh to the eternal abyss.

Snookism: Mike can be a nice guy. Like, he shows his good side then he shows his jerk-off side. That's what I like: a good guy and a jerk off, it's all in the same.

Real meaning: Be wary of the man who struggles to hide his inner darkness.

Snookism: Pickles is my thing.

Snookism: I look over and I see like hair being pulled and all this shit, I'm like, "Oh my God, how do I get in?"

Real meaning: Touching divinity is impossible without a blind leap into the unknown.

Snookism: I'm fat. I'm about to eat a sausage right now. Fuck you all! Ha ha!

Real meaning: No finer pleasure awaits us than to sup as night falls, heedless of the larger world outside.

Snookism: Um, I don't read books. I tried to read "Twilight," but it got boring the second page. There's no pictures, so, I'm not readin' it.

Snookism: My most prized possession would probably be my bronzer and eyeliner. Bronzer because, just in case you go out and then you look in the mirror and you look pale? Just apply the bronzer. You don't have enough eyeliner on? Put the eyeliner on.

Real meaning: Assume a virtue if you have it not.

(Yes, Snooki was conjuring Shakespeare in those last two.)