The State of the Union I'd like to see

Why doesn't Obama call the GOP on its year of obstruction? Because he's learned the wrong lesson from Massachusetts 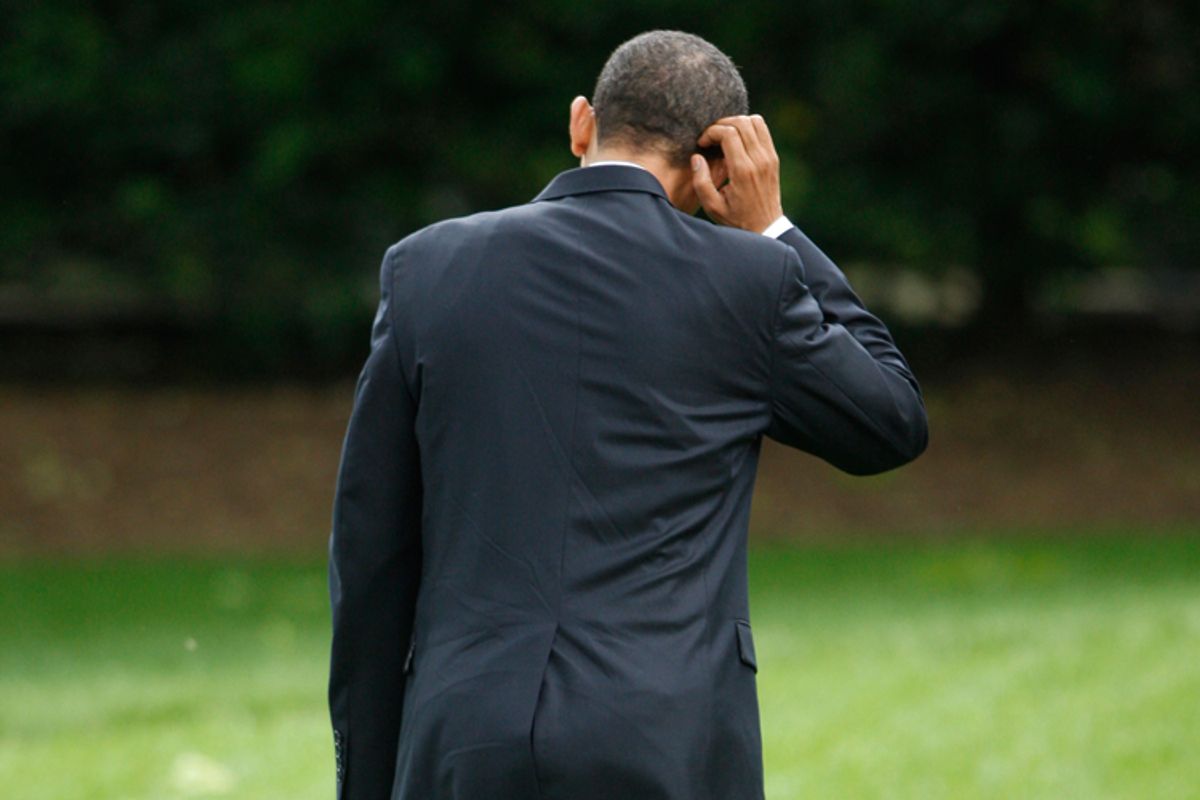 Over the weekend, I had the good or bad fortune to pick up George Packer's "Interesting Times," a collection of his columns between 9/11 and the Obama election. I only suggest it was bad fortune because it put me in a deeper funk about Obama than I had been before. And if you've seen my recent blog posts, you'll know it was already pretty deep.

Packer clearly admires Obama, as do I, but he sounded some alarm bells about him two years ago that have turned out to be justified, in all four pieces he wrote on the campaign. One of them had to do with the campaign's always questionable commitment to bipartisanism. Packer didn't mock Obama supporters' giddy predictions that their man was uniquely qualified to usher in a new age of bipartisan cooperation, but he always raised an eyebrow. In the very first chapter, former Clinton lawyer and close friend Greg Craig explains why he's abandoned his old Yale buddies to work for Obama.

"I want a President who is looking to move the country with positive inspirational ideas rather than to fight off the bad guys and proclaim victory by defeating the forces of reaction. I would like us to inspire the forces of reaction to join us in treating people better, and lifting more vulnerable people and people in jeopardy out of their vulnerability and jeopardy."

Of course, as Craig learned during the impeachment effort-which he denounced as "a gross abuse of power"-the Republicans in Congress have shown little interest in making peace with Democrats. "Yes, but the way in which you beat them, the way in which you make progress in this country, is not by further polarizing and further dividing," Craig said. "It's by building the consensus around the positions that make sense-say, the position that we should not have forty-seven million Americans uninsured. You don't win national health insurance by turning Republicans against you. You've got to get them to join you."

How did that work out for you, Greg? (Of course Craig's quotes are especially poignant, given his early departure from the administration, reportedly because he differed with Obama's about-face on the issue of releasing torture photos and other Bush-era policies.) But it comes up again and again, the expectation that Obama's charisma and appeal would part the waters and lead us to a promised land of bipartisan harmony. Here's David Axelrod, to Packer, after Obama's stunning November election:

Of course, Axelrod was dead wrong. Now what?

Instead of changing course and realizing that reaching across the aisle was futile, it sounds like the Obama team plans to redouble efforts to court their enemies with Obama 2.0.  I don't expect the president to come out swinging in his State of the Union tonight, but I do wish he'd point out how little cooperation he's gotten from the GOP. I expect to be disappointed. I've expressed my dislike for his faux spending freeze. Early reports are that Obama himself is going to take responsibility for the slow pace of change. I like that stand-up attitude -- such a contrast with George W. Pass the Buck Bush -- but it's not sack-cloth and ashes time here. Obama should be using this speech to rally Congress behind substantive healthcare reform – not the playing at the margins that both party's leaders suggest might be the next move at this point.

I'd like Obama to point to the literally hundreds of Republican amendments to the health reform bill that Democrats accepted in the committee process -- only to get zero Republican votes for the bill, at any point along the way. I'd like him to call them on their obstruction. I'd like to see him tell Republicans they can either join him, or get out of the way. But I don't expect that.

Clearly Obama's team learned the wrong lessons from Massachusetts, and they're listening to low-information pundits tell them they have to move to the center to recapture the crucial independent vote. Of course, they do that by abandoning their Democratic base, and by, frankly, ceasing to be real Democrats. In my favorite Packer piece -- I read it at the time -- he went to blue-collar towns around Ohio, to explore whether and why white working-class voters would back Barack Hussein Obama. And while, yes, he finds racism as well as right-wing-inspired doubts that he's American and Christian, he finds something much more important: a sense that Democrats, not just Obama, had abandoned the working class, had ceased delivering the economic support they needed.

Residents of these near-dead towns could point to FDR-funded buildings, and Harry Truman-backed programs like the G.I. Bill. But they didn't have much to show from Democratic presidents since then. Packer cites a paper by Lane Kenworthy at the University of Arizona that traced the decline of Democratic support among white working-class voters:

Mining electoral data from the General Social Survey, they found that the decline in white working-class support for Democrats occurred in one period—from the mid-seventies until the early nineties, with a brief lull in the early eighties—and has remained well below fifty per cent ever since. But they concluded that social issues like abortion, guns, religion, and even (outside the South) race had little to do with the shift. Instead, according to their data, it was based on a judgment that—during years in which industrial jobs went overseas, unions practically vanished, and working-class incomes stagnated—the Democratic Party was no longer much help to them.

“Beginning in the mid-to-late 1970s, there was increasing reason for working-class whites to question whether the Democrats were still better than the Republicans at promoting their material well-being,” the study’s authors write. Working-class whites, their fortunes falling, began to embrace the anti-government, low-tax rhetoric of the conservative movement. During Clinton’s Presidency, the downward economic spiral of these Americans was arrested, but by then their identification with the Democrats had eroded….Democrats fundamentally lost the white working class because these voters no longer believed the Party’s central tenet—that government could restore a sense of economic security.

Those doubts, of course, extend beyond the white working class. Obama's supporters are happy with a recent NBC News/Wall St. Journal poll showing the president remains popular, and less than a third of voters blame him for the past year of gridlock. But many of them do blame Democrats. This president will fail if he isn't able to deliver healthcare reform and economic equity before 2012, but Democrats will fail this year -- making it even harder for Obama to pass any kind of populist agenda.

I know the president was trying to sound brave and beyond politics when he told Diane Sawyer this week that he'd rather be a good one-term president than a mediocre two-term president. The fact is, if he's a good one-term president he's likely to get two terms. He won't do it by continuing a Democratic trend of betraying his base and the promises he made along the campaign trail. I'd like to hear him recommit to his own agenda tonight, but sadly, I don't expect to.