Bacon and yoga, together at last 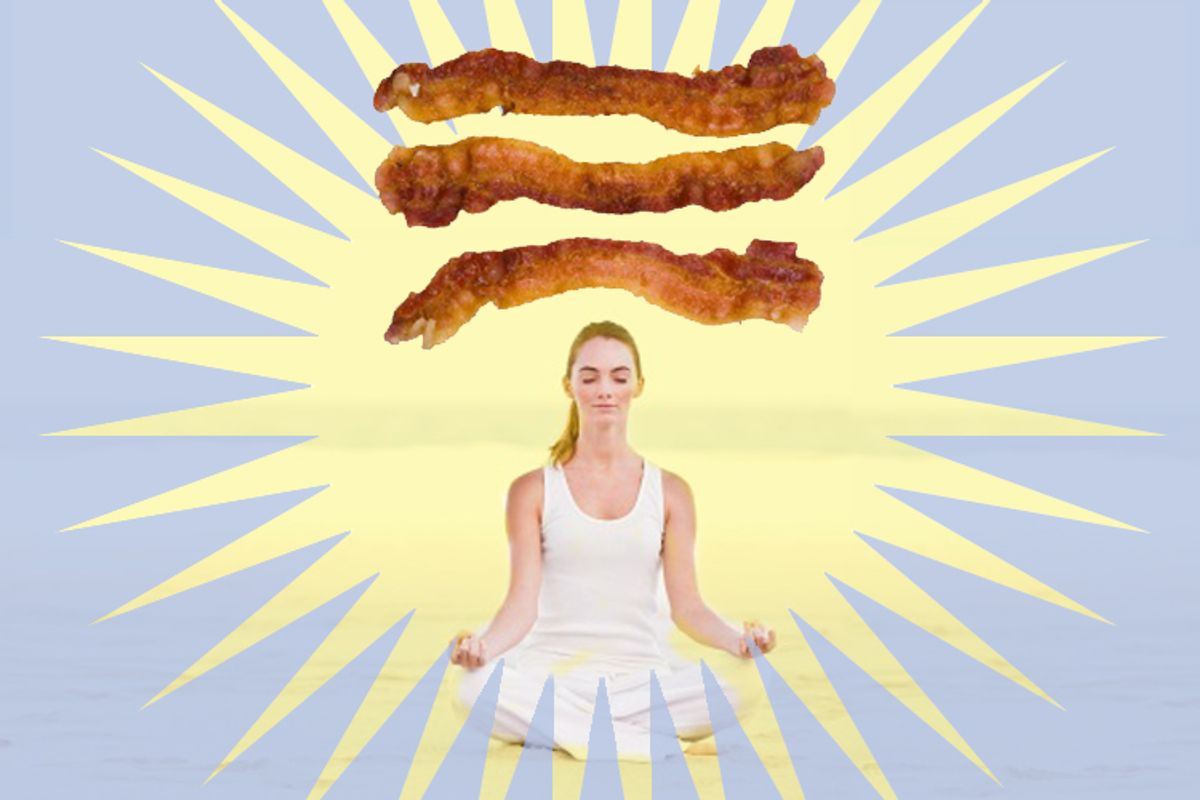 For non-New Yorker readers of the New York Times, it must sometimes be hard to imagine that we all live in the same country (or the same universe). Especially when they read articles during a recession about the popular new "cave man diet," the trendiness of the pot-belly, or the "hottest of all hot-button issues in yoga," the epic war between yoga foodies and yoga practitioners who don't eat meat.

Today in the Times dining section, Julia Moskin tackles the latter -- and attends what might be the world's most annoying-sounding yoga class in Manhattan:

Calling his mission “yoga for the Everyman,” Mr. Romanelli, 36, plays Grateful Dead songs during class, wears sweat pants rather than spandex, and has already experimented with offering chocolate truffles after chaturanga instruction. “It’s a way of getting people in the door,” he said in an interview.

Right, because the people who were skeptical about yoga are going to be lured in by the Grateful Dead and high-end chocolates. Given that, as Moskin points out, "both American-style yoga and the food revolution were born in the counterculture of the 1970s," and both have morphed into large high-end industries (See: Whole Foods, the ridiculously expensive Lululemon), you wouldn't think that there would be much to get upset about. But as Rick Bayless, one of the country's most prominent chefs and a TV show host, explains in the article:

“It’s been one of my struggles,” said Rick Bayless ... who has been practicing yoga for 15 years, is not a vegetarian and loves pork. “I think that sometimes the yoga community is a little too austere, and it’s hard to talk about what I do with people who believe in eating just what you need to stay alive.”

When it comes to eating meat, things get even more prickly. Traditionalist yogis believe that meat is forbidden, and some high-end teacher training programs only admit vegans. But recently many practitioners are getting to be a bit more open-minded about it: The teacher of the aforementioned Grateful Dead-playing yoga class uses bacon as a "yogic teaching tool, providing an opportunity to contemplate principles of attraction and revulsion, desire and self-denial" and, more delightfully, famed yoga teacher Bryan Krest labels himself a "'selectarian,' one who chooses everything he eats" (as opposed to being a whateverian, one who only eats food that falls into one's mouth from above). Also:

"Yogic food choices can also influenced by ayurveda, a traditional Indian way of eating to keep the body healthy and in balance. Some yogis determine their dosha, or dominant humor, vata (wind/air), pitta (bile) or kapha (phlegm), and eat accordingly. Foods are invested with properties like warming or cooling, heavy or light, moist or dry."

Of course, yoga is a popular movement that's brought a lot of health benefits to a great many people, and I have the sense that the New York Times was invested in making some of these people seem as outlandish (or, as the article puts it, "woo-woo") as possible, but, for those of us  on the outside of the yoga world, this entire debate sounds about as ridiculous as a basing your diet on your "dominant humor" and medieval-sounding food-moistness criteria.