Are we headed for the day when politicians appear on TV wearing jumpsuits festooned with company logos? 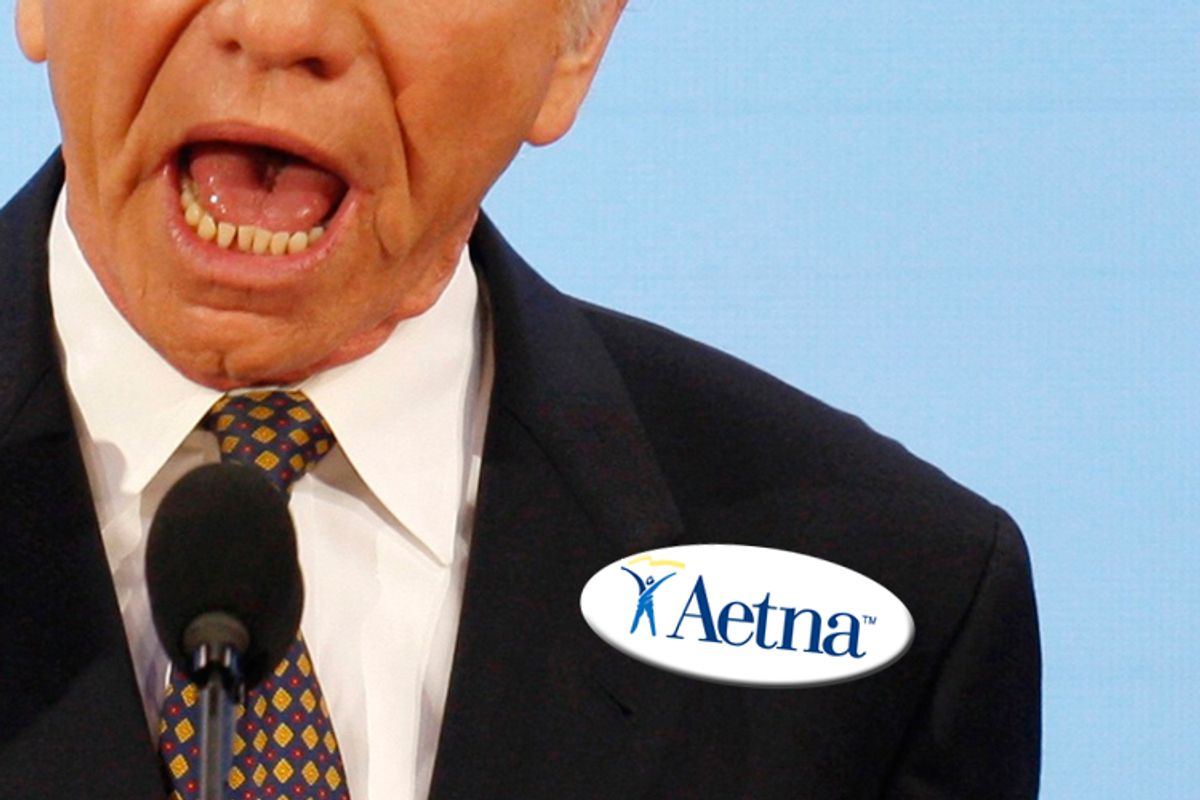 "I hope we shall crush ... in its birth the aristocracy of our moneyed corporations, which dare already to challenge our government to a trial of strength and bid defiance to the laws of our country." -- Thomas Jefferson, 1816

Thanks in part to the Supreme Court and our diligent friends at Citizens United, the United States has now moved a step closer to formally adopting a "one-dollar, one vote" political system. I've long used the phrase satirically to describe the malign influence of tycoon-funded Washington propaganda shops like Citizens United upon our democracy. In the wake of last week's Supreme Court ruling awarding corporations precisely the same First Amendment rights as individual U.S. citizens, it's not so funny anymore.

Citizens United, and its head honcho, David Bossie, had a hand in virtually every lurid smear of Bill Clinton. Newt Gingrich eventually fired him as a congressional investigator for distributing doctored audiotapes falsely implicating Hillary Clinton in wrongdoing. During the 2008 primaries, Bossie helped produce another video attacking then-Sen. Clinton. Citizens United was free to sell it or give it away. Due to its corporate funding, however, the Federal Election Commission ruled that campaign finance laws prohibited its being broadcast as a political commercial.

Five radical-right judicial activists on the U.S. Supreme Court disagreed. Brushing aside a century of lawmaking and judicial precedent dating back to Theodore Roosevelt, they ruled that when it comes to political speech, you, I, General Electric, Toyota and Goldman Sachs have exactly the same free speech rights.

You're free to write a letter to the editor or stand on the corner holding a sign; corporate executives can spend as much as they like to influence elections. No, they still can't legally stuff wads of currency into politicians' pockets. But they're free to use unlimited company funds in support of causes and candidates friendly to the bottom line. Not their own personal money, mind you, but that of an abstract, purely legal entity having no passions or loyalties beyond economic self-interest. Even if the corporation is a multinational headquartered on Wall Street, in London, Tokyo or Beijing.

In a remarkably bitter dissent, Justice John Paul Stevens said that the majority's contention that "the identity of a speaker has no relevance to the government's ability to regulate political speech would lead to some remarkable conclusions. Such an assumption would have accorded the propaganda broadcasts to our troops by 'Tokyo Rose' during World War II the same protection as speech by Allied commanders. More pertinently, it would appear to afford the same protection to multinational corporations controlled by foreigners as to individual Americans."

This radical departure from anything intended or even imagined by the Founding Fathers some call "conservatism." Actually, there's a more accurate term for the merger of national government and corporate power, but it's been thrown around so much at tea party events to describe President Obama that it's ceased to have any real meaning except that the individual using it is spittle-flinging mad. Think of it as the other F-word.

Suffice it to say that we're headed toward the day when politicians may appear on TV wearing one-piece jumpsuits festooned with corporate logos, like NASCAR drivers or pro bass fishermen. It won't simply be a sarcastic joke to describe Sen. Joe Lieberman as the Man From Aetna, or Sen. Blanche Lincoln as D-Wal-Mart. It may be close to literally true. Hardly anybody at odds with their state's most powerful corporate entities will have the proverbial snowball's chance of being elected. Not that they have a whole hell of a lot today.

Almost needless to say, protected political free speech, unlike commercial speech, can't be regulated for truthfulness either. The people who manufacture Viagra and Cialis are well-advised to warn against the heartbreak of four-hour erections, and forbidden from claiming that the stuff will cure baldness or the common cold. That's fraud.

But if pharmaceutical companies sponsored ads favoring specific political candidates who claimed that cutting corporate income taxes to 2 percent would magically close the nation's budget deficit, which would now be their First Amendment right. It's not unconstitutional to lie.

That said, observing today's Washington, it's difficult to imagine American politicians as a class becoming more in thrall to multinational corporations than they already are. Indeed, last week's decision probably generated as much angst as joy in corporate boardrooms, because next time the candidates come around with their hands out, CEOs can't say, "Hey, we'd love to help you out, but it's against the law."