The president gives (another) great speech. But it will take more than words to get his agenda back on track 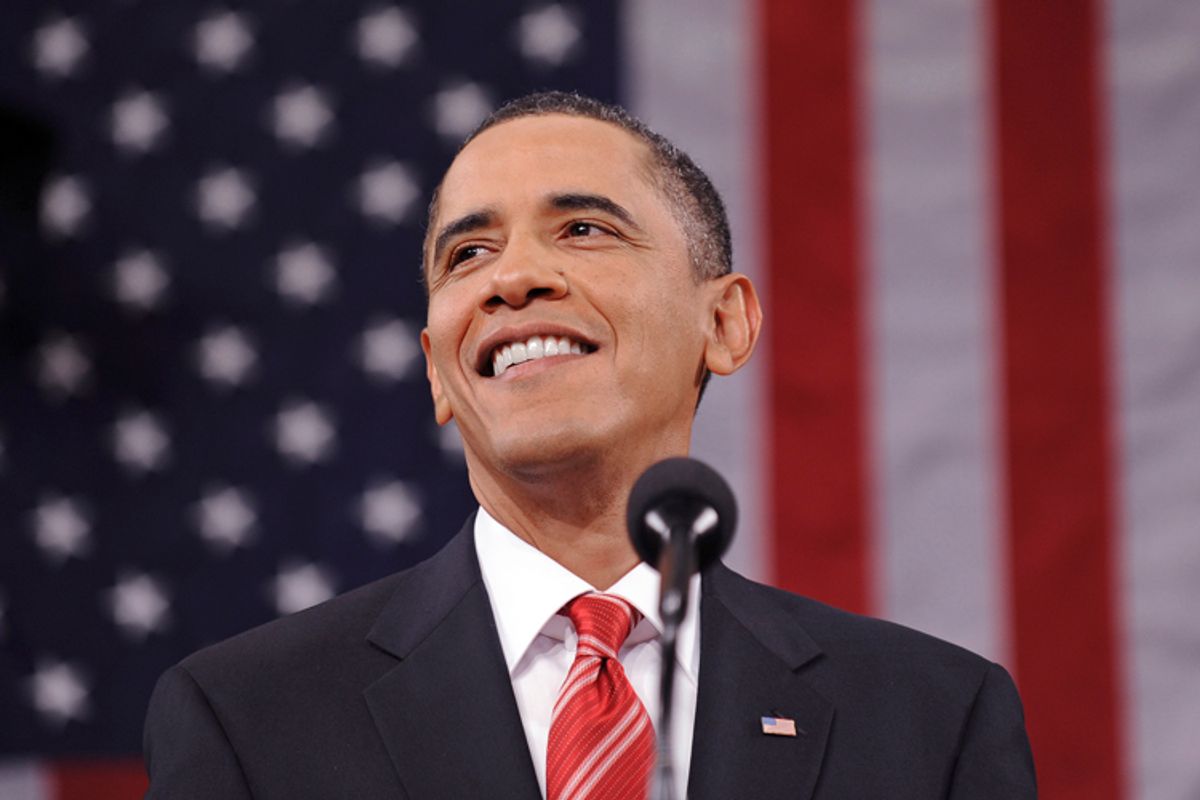 Barack Obama delivers his first State of the Union address on Capitol Hill in Washington on Wednesday.
--

In case he wasn't fully aware that Republicans are impervious to his political charm, President Obama saw it early in his first State of the Union address. After ticking off a list of taxes he'd lowered, the chamber was in cheers -- except for the GOP side of the aisle, where traditionally tax-cutters have clustered. Obama smiled and ad-libbed, "I expected some applause for that one."

Just like he expected some GOP cooperation when he became president a year ago – but he got neither. In this State of the Union speech Obama showed more spine and fire than he has of late, mainly using humor to turn the GOP's dourness back on itself. It was a strong address, but it will take more than words for Obama to get his agenda back on track.

The best of the speech: In terms of policy, I was glad to see him demand that Congress continue to work on health care reform – though I was a little disturbed he offered no specifics. As the Washington Post's Ezra Klein (who's doing some of the best reporting on health care) Tweeted, "Notably, Obama did not say pass the Senate bill or amend the Senate bill. There's no more clarity on process." And it was a half hour into the speech before he mentioned it.

Obama also made a strong call for imposing fees on banks to repay the TARP program, and the camera shot of Republicans sitting silently, not clapping, will make for great Democratic campaign ads in November. He reaffirmed his commitment to letting the Bush era tax cuts expire (he'd supported that already, but in this climate of Democratic cowardice it was good to hear it again.) He announced a new jobs program, though at $30 billion it falls far short of what's needed. And he recommitted himself to repealing "Don't Ask, Don't Tell" -- I'm not sure what to make of the scary camera shot of unhappy-seeming Joint Chiefs that followed -- but it's still not clear exactly what he'll do to make that discrimination history.

The worst of the speech: Obama is borrowing too much rhetoric, and policy, from the GOP. He supported his spending freeze by saying "Families across the country are tightening their belts, and making tough decisions. The federal government should do the same." That's a disingenuous comparison, and downright dangerous in a recession. The government needs to spend when families can't. Unbelievably, he led his section on energy policy by calling to expand nuclear power, clean coal and offshore drilling – nothing that Sarah Palin could quarrel with. (And still, when he talked about scientific evidence of climate change, he faced grumbles from the GOP side.)

Personally, I enjoyed hearing the president lecture both parties on their responsibility to the American people. To Democrats acting like they're suddenly in the minority since Scott Brown became the 41st Republican senator last week, he said, essentially, "Buck up." In Obama's words: "Democrats, I remind you we still have the largest majority in decades, and the people expect us to solve problems, not run for the hills." Predictably, and justifiably, he was harder on Republicans: "If the Republican leadership is going to insist that 60 votes in the Senate are required to do any business at all in this town -- a supermajority -- then the responsibility to govern is now yours as well. Just saying no to everything may be good politics, but it's not leadership. We were sent here to solve problems, not serve our ambitions." But throughout the speech, House Minority Leader John Boehner and his sidekick Eric Cantor sat together smirking like pissy little schoolboys, while Senate Minority Leader Mitch McConnell chuckled at the notion "Just say no" might be bad for the country.

Still, maybe I'm naïve, but there was a fascinating silence in the chamber for the last few minutes of the speech, as Obama continued to remind the Congress of its responsibilities and recommit himself to his agenda. Even Republicans seemed to be listening. He praised "the generations of Americans who did what was hard," adding "We don't quit. I don't quit."

It was a good speech. It was better and tougher than I expected (I didn't expect him to tweak the GOP for playing "Just say no," for instance). But I've swooned over Obama's speeches before. The man can do speeches. He needs to follow this one up with tough action to make his agenda reality before it will really be more than just words to me.

Barack Obama State Of The Union