Cosmo calls the end for that silky, skimpy triangle of fabric. We speak to the people affected most -- straight men 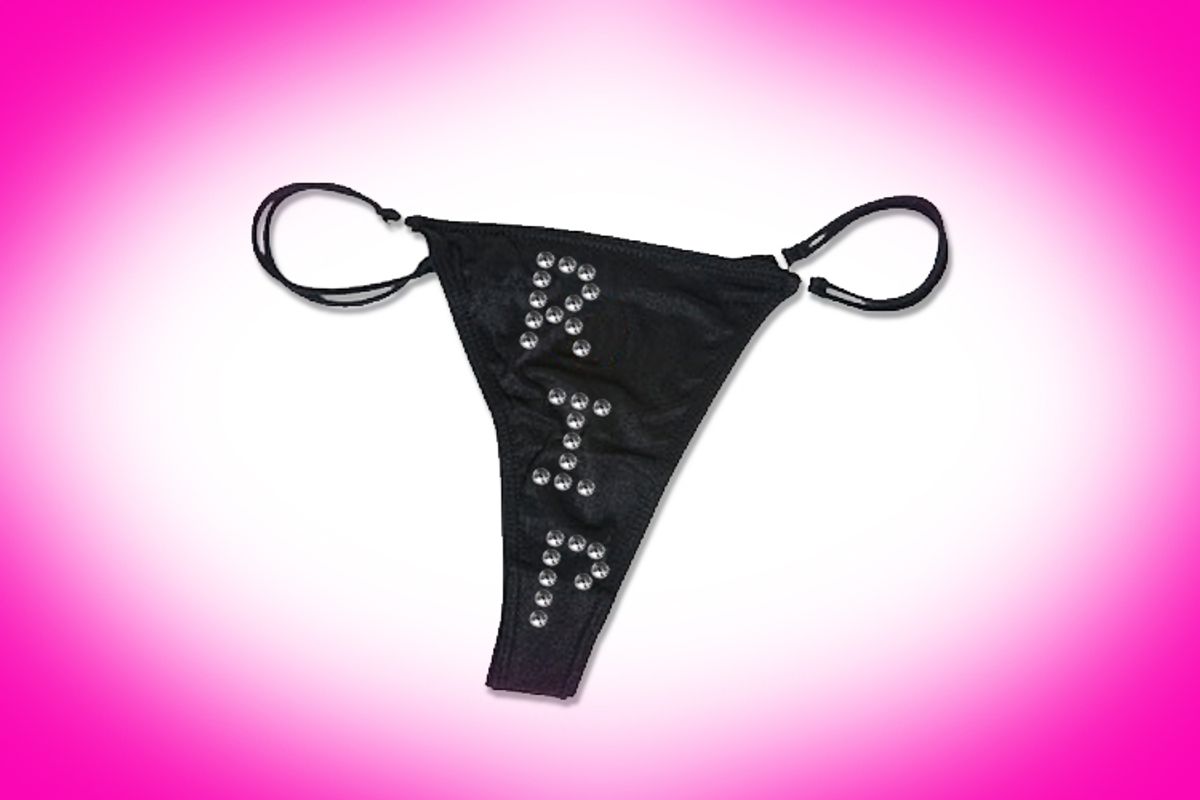 This month, Cosmo declared the death of the thong. "Its popularity seems to be fading, and recent figures show another style is taking over," writes Jessica Knoll, referring to the ubiquitous boy short. That the obituary came from Cosmo must particularly sting for the poor, culturally irrelevant thong, as if Maxim proclaimed the end to wet T-shirts. But frankly, Cosmo was polite to wait so long. Alex Kuczynski wrote about "thong fatigue" in the New York Times Styles section way back in 2004. "The thong has peaked," one industry insider assured us. Of course, it hadn't, not really: The next three years turned out to be a boom time for bottle service, botox and upskirt photos on TMZ, for which thongs were the perfect (the only, really) appropriate lingerie. But the recession put a damper on the pole-dancing bacchanal. And more than a year after the bust, the glory days of that skimpy, silky triangle of fabric -- coveted by exhibitionists, praised by poets (well, Sisqo anyway) -- has come to an end. RIP, the thong. That thong-thuh-thong-thong-thong.

Frankly, I was never on Team Thong. I have female friends who swear by the suckers, but for many of us, the thong was an epic fail -- neither flattering nor comfortable, a permanent wedgie at premium prices. I know, I know, the feminist gripes about thongs are so well-established, so snooze-inducing as to require Breathe Right strips. Let's face it, thongs were never meant to please women. It's hard to think of an item in Victoria's closet that screams "male gaze" quite so loudly (sequined pasties?). So if we want to know the effects of the thong's demise, we have to talk to the audience it was intended for: straight men.

"I loved the thong," my friend Bob told me. "I love women's asses, and I'm totally in favor of anything that reveals them. I get that they're uncomfortable and sexist, but it's a limbic thing. The ass is the total engine of a woman's body." (By the way, Bob is totally not his name. Like a lot of other men I spoke to, he's married with kids, and allowing these men anonymity to dish about women's unmentionables seemed only fair.) My friend Hunter offered a similar view: "Generally humans should avoid jamming stuff into the butt crack," he wrote by e-mail. "But I know men's true opinion on the subject: Women should wear as little as possible."

My friend Brian remembers the first thong he ever saw -- "Crocodile Dundee," age 7, Mom sitting next to him (awkward!) -- and the first time a high school girlfriend was so generous as to strip down to the scandalous, butt cheek-baring panties in his presence. If the thong was not exactly his equivalent of Proust's madeleines, the thong was, let's say, Proust's low-fat scone. But then something pivoted. Like Britney Spears, thongs didn't excite as they once did -- not after years of Skinemax softcore, not after a parade of college coeds snapping their whale tails. Not after Monica Lewinsky and Paris Hilton and Brooke Hogan and the Real Housewives. "The thong became Sexy™," he explained.

And as far as bedroom seductions go, it became nearly as subtle as a dick in a jar. The joy of the "striptease," after all, is the deliciously protracted reveal of the body, something peeled off, something hidden -- but thongs frontloaded all the naughty discoveries: Why, yes, my pudendum's been waxed and shaven to look like that of a 12-year-old girl; why, yes, my ass cheeks have pressed up against the cold glass of a tanning booth. And for some, the sharp intake of breath that once accompanied a brazenly bare bottom became more like, well, an eye-roll.

"As a boy, like all boys, I obsessed over the Sear's underwear section, Spiegel's if I could get it, Victoria's Secret, et al.," wrote a friend I'll call Steve. "They used to run high-end lingerie ads in the New York Times. Really sexy stuff -- in an adult way. Baroque and luxurious." But in the late '90s and early 2000s, in a backlash to the lazy flannel and torn jeans of the grunge days, the era of pornification emerged -- girls gone wild! celebrity sex tapes! strip class as exercise! -- leaving sly nuance behind. "The thong is an expression of the knee-jerk assumption that when it comes to lingerie, the less the better," said Steve. "To me, the thong is like fenugreek. It's a particular spice, a good one, but only appropriate at points. And rarely on its own, and never meant to dominate a dish." But instead of something worn occasionally, the thong became something to wear all the time, every day, "the sine qua non of sexiness," explains Steve. "But it's a question of balance. Lace and satin are sexy. And they look good on a whole wide range of female bodies, whereas the thong only works for some (and that's an entire, other, tricky proposition: It's not about size or body type, per se, but an accumulation of details. Some large-reared women look great in thongs, while skinny butts, not so much)."

But the thong was never about reality. (A panty designed to go in the very place we'd spent so long trying to keep it out? Comedians, meet your punch line.) The thong was about fantasy: What it felt like to wear it, what it would be like to see it in the flesh. And fantasies are powerful.

"If I searched my soul, I probably prefer boy shorts," explained my friend Josh. "But no girl I've been with has worn a thong. Thus, I still like it. If they had or did, I'd probably be over it as a talisman of sex."

But a surprising number of the men I spoke to -- about half, probably -- had almost nothing to say about the thong at all. ("I don't think the thong can be folded," offered my friend Roger, who shares laundry duty with his wife.)

Back when my friend Seth and I were in college in the late '90s, he went on a rant about thongs. We were about halfway into a 12-pack and one of the great bad movies of all times, "Showgirls." I have a distinct memory of Seth going off about thongs, with that hilarious arrogance particular to a college liberal arts senior: how the thong didn't even flatter a woman's body, how it lacked poetry, how it was a failure of imagination, something something I can't remember now.