"Edge of Darkness": Is Mel Gibson crazy-good, or just crazy?

In Martin Campbell's smart thriller, it's hard to tell 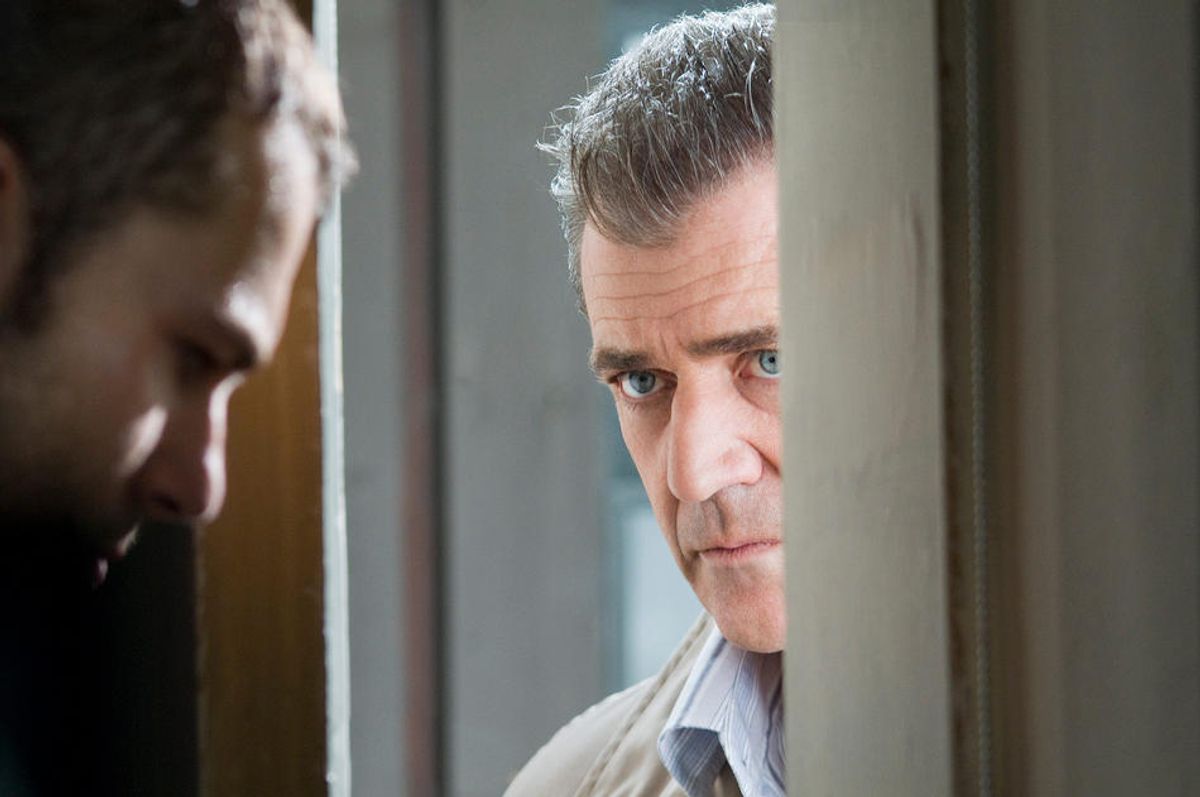 Shawn Roberts and Mel Gibson in "Edge of Darkness."
--

"Edge of Darkness" opens with a gorgeous, unsettling image: A placid body of water shimmers beneath a glowing orb of a moon, a picture of serenity that's broken first by one corpse popping to the surface, followed by another and another. The image suggests we're in for an artful noir, a picture that just might deliver more moody atmosphere than thuggish thrills.

We can dream, can't we? "Edge of Darkness" is somewhat stylish, and it's intelligently made: The director is Martin Campbell ("Casino Royale"), and he's reprising, in a condensed form, the popular British miniseries of the same name he directed in 1985. (That series was written by Troy Kennedy-Martin; William Monahan and Andrew Bovell have adapted the script for the big screen.)

The story is serpentine and engaging, winding its way through a rocky landscape of conspiracies and coverups on the part of the military, government and big business. But it's also an excuse to watch its star, Mel Gibson, beat the crap out of bad guys (or even just suspected bad guys) for two hours. And while that could conceivably be enjoyable by itself, it also raises an uneasy specter of an idea: Is Gibson -- who has, at certain points in his career, been a truly marvelous actor -- now just playing a slightly crazier version of himself?

Gibson last appeared in the 2003 "The Singing Detective"; before that, he starred in M. Night Shyamalan's 2002 "Signs" (which posited that if pesky aliens in stretchy P.J.s were ever to touch down in America's heartland, all we'd have to do is throw water on them -- who knew?). In the interim Gibson has been busy producing and directing ("The Passion of the Christ," "Apocalypto"), as well as spewing anti-Semitic nonsense and generally acting like a nutball hothead.

Anti-Semites and nutballs can still, of course, be terrific actors. And no matter what you think of Gibson, "Edge of Darkness" has plenty going for it. Gibson's character, Craven, is a Boston cop whose daughter, Emma (Bojana Novakovic), is murdered right before his eyes. Her death is sudden, bloody and brutal; she dies in his arms, and Campbell and the actors give the moment a raw, unsentimental poignancy.

The heartbroken, hardened Craven sets out to find Emma's killer, and his search takes him to the dumpy Northampton apartment of her ex-boyfriend (Shawn Roberts), as well as to the offices of the crafty executive who runs the scary-secretive company where Emma had recently been hired as what she calls "a glorified intern." (The big cheese is played, with oily efficiency, by Danny Huston.) The always-amazing Denis O'Hare shows up as a wily spin doctor. But the movie's biggest attraction is Ray Winstone, as a shadowy operative. Winstone is a wonderful tough-guy actor, with one of those whispery, raspy voices that invites you to lean in close: He builds intimacy with an audience by hanging back instead of reaching out. His performance here is soulful and mysterious, right up to the film's last minutes. And Campbell takes extreme care in preserving the story's twists and surprises. He disseminates plot details at just the right pace; the picture feels both leisurely and tightly controlled.

Which brings us to the problem of Gibson. No matter how badly he behaves, I will always love him for "The Year of Living Dangerously" and "Mrs. Soffel" alone. But I can't say I much enjoyed watching him in "Edge of Darkness." Gibson's character here is a man crazed with grief. But it looks as if Gibson is just using that as an excuse to act crazy, period. The film's violence is bold and unapologetic, but at times Gibson looks a little too comfortable with it all, kicking ass right and left with unhinged glee.

Gibson does have one or two terrific moments, most notably one in which he stands in front of his bathroom mirror, staring at the image before him, smeared with his daughter's blood. He pauses before wiping his face with a towel, which he then, tenderly but resolutely, tucks into a nearby glass. It's a killer moment, because it shows us what Gibson is still capable of doing, and it forces us to reckon with what we mean when we say we "like" or "dislike" a certain actor. Gibson still has the goods, and maybe his weird personal conduct is a separate issue from his acting. But I still can't shake the feeling that watching him will never be the same.