On foreign influence, experts back Obama 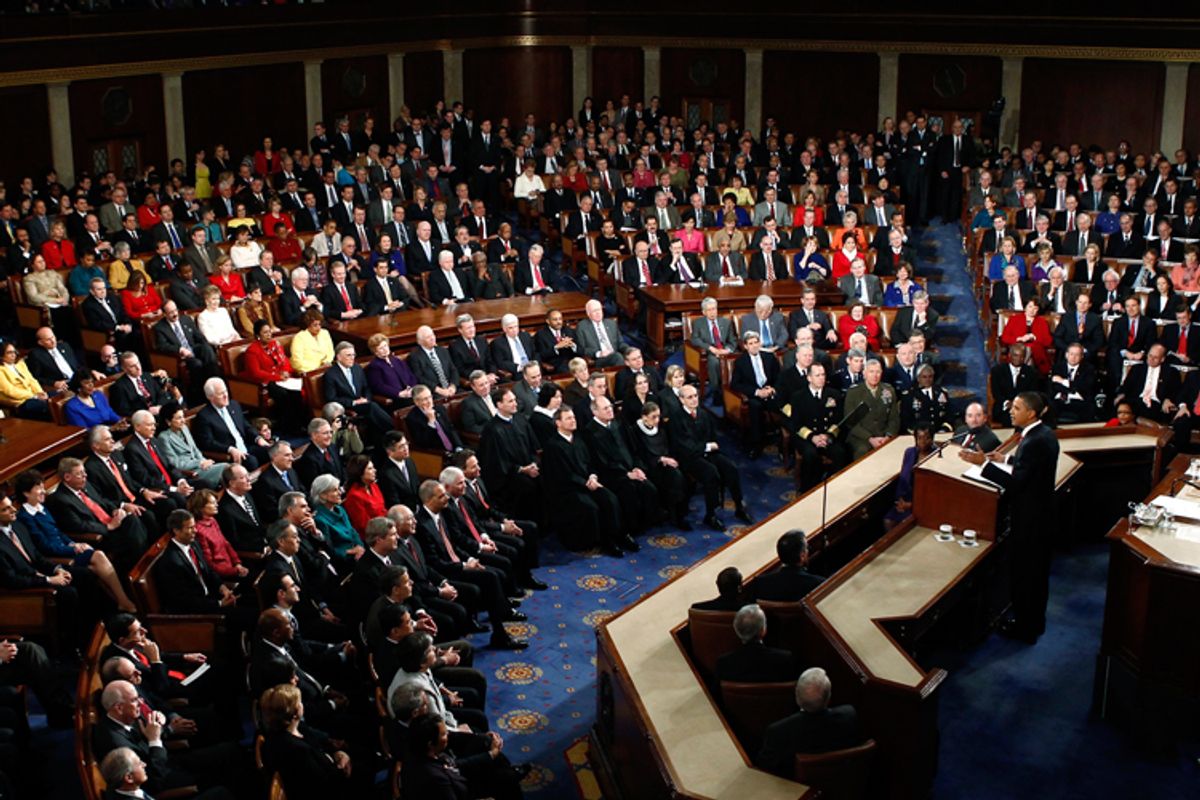 President Obama delivers the State of the Union speech Wednesday.
--

Today the Wall Street Journal editorial page joined the chorus of usual suspects claiming the president lied when he said the following about the recent Supreme Court decision in Citizens United:

"I believe [that decision] will open the floodgates for special interests -- including foreign corporations -- to spend without limit in our elections."

Let's leave aside for a moment the obvious rejoinder, namely that neither the Journal's editorialists nor any of his other critics can possibly know whether Obama actually "believes" what he said or not. Instead, let's revisit the issue at hand, which is whether foreign interests will now be able to influence American elections.

The Politifact Web site, in a post that curiously described Obama's remark as "barely true," went on to quote legal experts who provided clear support for his concerns. Robert Kelner, chairman of the election and political law practice group at Covington and Burling, said: "Some people think that Kennedy's opinion in Citizens United logically leads there. Maybe it does, maybe it doesn't. We don't know for sure." Brett Kappel, who specializes in political law at Arent Fox, said the majority opinion "certainly could be read as declaring this provision unconstitutional, so I'd have to say the president's interpretation is correct -- but we won't really know for sure until a court rules on the issue."

Meanwhile Politico quoted Michael Dorf, a Cornell University law professor who doesn't oppose foreign contributions to American political campaigns: "It is a plausible inference from the court's opinion that [foreign] money can't be restricted," he affirmed.

Experts at two of the most respected nonpartisan organizations in Washington agreed on the likely impact of the court's ruling. J. Gerald Hebert, executive director and director of litigation at the nonpartisan Campaign Legal Center, noted that the prohibitions on foreign contributions in current law do not control contributions from foreign-controlled domestic corporations: "With the corporate campaign expenditure ban now being declared unconstitutional, domestic corporations controlled by foreign governments or other foreign entities are free to spend money to elect or defeat federal candidates," he told the Center for Public Integrity.

Fred Wertheimer of Democracy 21, who is among the most experienced reform advocates, went further -- and his analysis deserves close attention for its lucidity and logic in exploring whether the Court opened the political process to foreign financial influence:

"Some have argued that this will not happen because there remains a separate federal law that prohibits contributions and expenditures to be made by any 'foreign national' in connection with any Federal, State or local election. The Court in Citizens United did not review this separate law - section 441e - and it remains in effect.

"Section 441e prohibits contributions or expenditures by any 'foreign national' - which is defined to include any corporation 'organized under the laws of or having its principal place of business in a foreign corporation.'

"Thus, a corporation organized in Germany, or with its headquarters in China, remains subject to a ban on spending in U.S. elections.

"But there are domestic corporations - those organized under state law in the United States - which are and can be controlled by foreign interests.

"Those kinds of corporations - domestic corporations owned by or controlled by foreign governments, foreign corporations or foreign individuals - are not in any way prevented by section 441e from spending corporate treasury funds to influence U.S. elections.

"Prior to the Citizens United decision, these corporations were prevented from spending their funds on expenditures to influence federal campaigns by the general prohibition on corporate campaign spending. But now that that prohibition has been struck down, these foreign-controlled domestic companies are free to spend their treasury funds directly to influence U.S. elections.

"Thus, there is no statutory prohibition against foreign-controlled domestic corporations from making expenditures to influence federal elections, following the Citizens United decision.

"The Federal Election Commission has a regulation in this area, but it is inadequate and does not provide effective protection for the public against foreign involvement in federal elections.

"The FEC regulation prohibits any foreign national from directing, controlling or directly or indirectly participating in 'the decision-making process' of any person, including a domestic corporation, with regard to that person's 'election-related activities,' including any decisions about making expenditures.

"The regulation does not prevent foreign owners from making their views known to their American domestic subsidiaries about the governmental and political interests of the controlling foreign entity; it just prevents them from directly or indirectly participating in the formal "decision-making process."

"Those who manage the domestic subsidiaries, furthermore, can be expected to know the governmental and political interests and needs of their foreign owners, and to be responsive to the needs of their owners, even absent any participation by the foreign owners in the formal 'decision-making' process regarding expenditures in federal elections.

"In other words, the existing FEC regulation is an inadequate and ineffective safeguard, by itself, to prevent foreign nationals from exerting influence on U.S. elections through the use of election-related expenditures made by domestic corporations which they own or control.

"The only restriction here is an ineffective FEC regulation administered by an agency that is widely recognized as an abject failure in carrying out its responsibilities to enforce the nation's campaign finance laws."

Campaign Finance State Of The Union