Week three, when the wheat gets separated from the chaff. The assignment? High-end and budget couture 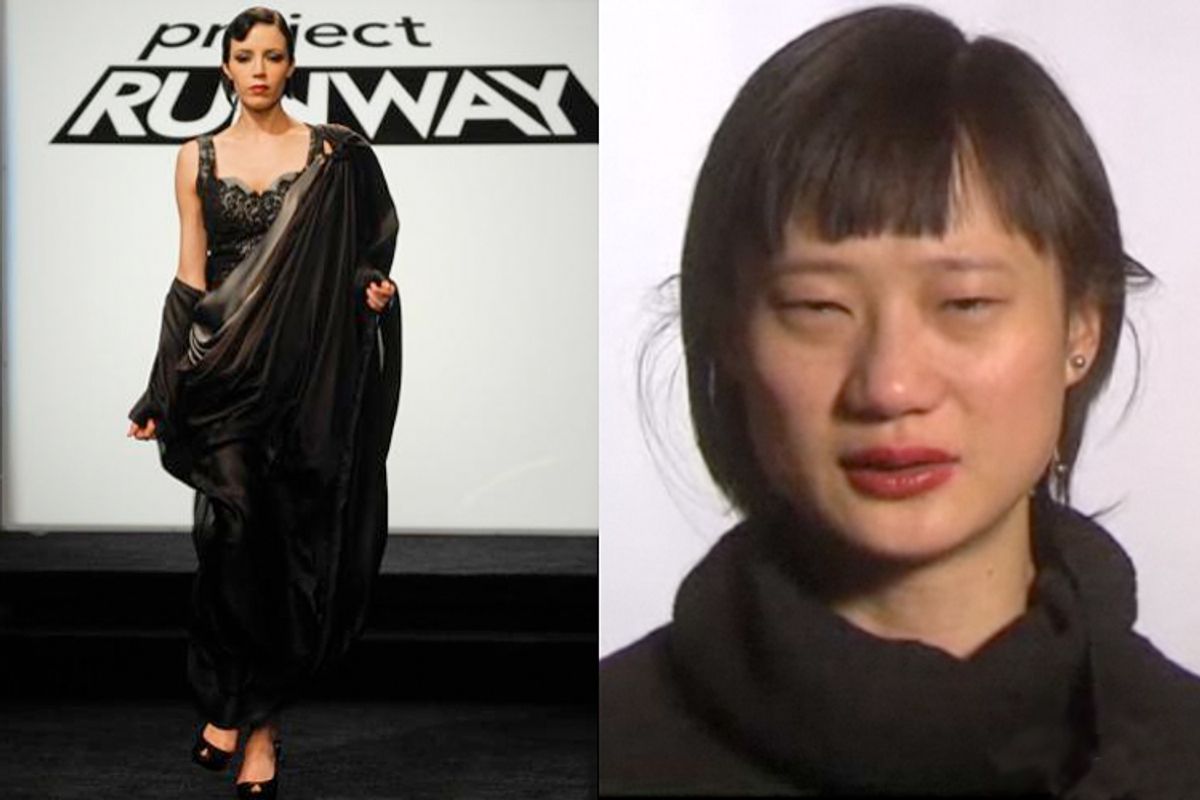 It is morning at the Atlas (shameless plug) luxury apartments. The designers frantically dress and apply makeup and copious amounts of hair gel, anticipating the challenge for the day. Ping, while trying to put her contact lenses in, says, "I can only see through one eye!" Anna, the sweet young thing from Wisconsin, retorts, "Maybe it will help your design." Ah, yes. Week three on "Project Runway." When we see the wheat begin to separate from the chaff. When we see the cream rise to the top. When everyone on the show starts blatantly making fun of Ping Wu.

This week the designers meet Tim Gunn at the Metropolitan Museum of Art, one of the most unoriginal sources of artistic inspiration that the producers of the show could have chosen. My smug sneering at this unimaginative venue quickly turned to awe when I saw gowns from the Costume Institute archives. Yves Saint Laurent! Christian Dior! Swoon! The challenge? To be inspired by the work of these geniuses and to create a "high-end signature look worthy of a master collection." The designers receive $500 to create the look and are told that they would be working in pairs. Ooh, reality TV paydirt!

The designers choose their partners using the scientific Tim-pulls-your-name-from-the-velvet-bag method. The grimace on Jesse's face when Ping picks him as her partner is priceless. All the other designers accept their partners rather graciously, and even lovingly. Seth Aaron says to Anthony, "Come here, brown sugar." Everyone makes the requisite mad dash through Mood fabrics (shameless plug), then back to the workroom to sew.

A disproportionate amount of camera time is given to Mila, who apparently is thinking more than she was sewing. Foreshadowing, no doubt. The bickering between Ping and Jesse is also well-documented, and Jesse claims he is trying to "rein in the crazy." An insurmountable task, indeed. Suddenly, Tim walks in, gathers the group, and drops the inevitable bomb: The designers will be required to make another look aimed at the mass market customer, a "look for less." The budget for this look is a mere $50, and it is to be inspired by the signature looks of the other designers. Are you confused yet?

Another mad dash to Mood, more bickering, more scurrying, more fleeting glimpses of nude models as they're being fitted (my husband enjoys thinking that he has just seen a breast. Never mind that the models don't have breasts). And was that a Colon Health probiotic commercial? Shame on you, Lifetime. Talking about diarrhea and bloating is just not haute.

Finally, it is the day of the runway show and everyone manages to avoid last-minute disasters. Heidi Klum, who looks approximately 17 months pregnant, waddles out onto the runway to introduce the judges. Matthew Williamson, an English designer who is known for his use of color, is the guest judge. I am impressed.

The runway show highlights include:

-Anthony and Seth Aaron send a large, black and yellow ball gown of gigantic proportions down the runway. Yes, it is just as hideous as it sounds. "Gone With the Wind" comparisons are made in homes across America.

- Mila and Jonathan send a black and white outfit consisting of high-waisted, shiny, black leggings and a voluminous graphic jacket. Oh, how I crow with laughter! This is supposed to be the work of a master? Ha. Surely Mila will be going home.

- Ping and Jesse send a black and gray gown with a lace top and silky skirt panels. At first glance, it actually looks classy. Upon closer inspection, there are yards of fabric sewn onto the back of the dress, then draped over the model's shoulder and arm, prompting Nina to make Statue of Liberty comparisons.

To my utter surprise, Mila wins. The judges praise her for not making a gown and for staying true to her design aesthetic. They love the modernity and the striking shape. Shiny, high-waisted leggings? Apparently I am terrible at determining what is good and bad fashion; I will never be asked to judge "Project Runway." Though I think I could have done a better job than Matthew Williamson, who basically just broods and looks at everyone contemptuously.

And the loser this week? Alas, it's Ping. In an interesting turn of events, Ping's model actually speaks (!!) and claims that Ping didn't fit her for the second, cheaper look. Way to throw your designer under the bus, Meg.

I am worried for Project Runway. The fashion this week is mediocre at best. The cheap looks were actually better than the expensive haute couture looks. Are these designers too commercial? They certainly don't seem to have a lot of originality. The colors are drab. Pieces are over- or under-designed. The judges still seem bored. I almost wish Heidi would go into labor just to provide some excitement. Yet I still feel that small tug of excited anticipation when the runway shows begin. Seeing the fashion, however fleetingly, is still worth it.