Hands off my pelvis, doc! 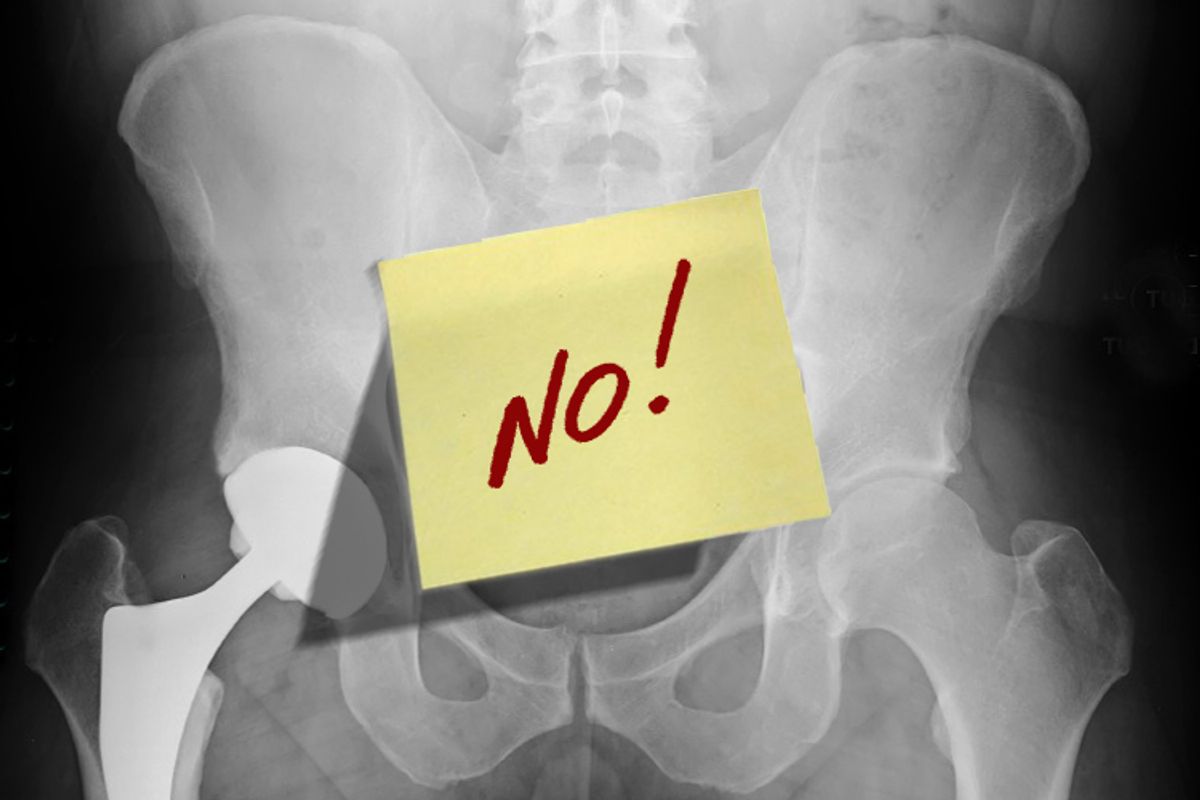 Broadsheet readers know that U.S. hospitals and courts have fallen down repeatedly when it comes to respecting the privacy and bodily integrity of women -- at least the pregnant ones. Among women who've refused to undergo c-sections, for instance, one was confined to a hospital against her will, one was accused of abuse and neglect in part because she insisted on delivering vaginally, one was arrested during a home birth, one was brought up on murder charges for having a stillborn baby, and one was forced to undergo the procedure at 25 weeks even though it risked her life. (Neither she nor the fetus survived.) That's just a sampling. But in at least one area, we seem to be doing something right, while Canada -- that magical, progressive dreamland of universal healthcare and legal gay marriage (never mind the current government) -- allows a horrifying violation of women's medical rights. In "many Canadian teaching hospitals," writes public health reporter Andre Picard in the Globe and Mail, "Medical students routinely practice doing internal pelvic examinations while surgery patients are unconscious, and without getting specific consent."

The U.S. and U.K. have guidelines requiring consent before a bunch of strangers are permitted to explore a patient's orifices, but "Canadian guidelines state that pelvic examination by trainees is 'implicit.'" You agree to one procedure while under anesthesia, and you've agreed to all of them, I guess? Or maybe just the ones that might be awkward and uncomfortable if you were conscious. Writes Picard (who deplores the practice), "The long-standing argument in favour of allowing these exams to be done on surgery patients is that it provides a unique opportunity for students to practice the delicate, invasive examination without causing the woman pain or embarrassment." There's probably a joke about the fabled Canadian politeness in there somewhere, but I'm really too disgusted and dispirited by that sentence to try. What makes a pelvic exam bearable, as a patient, is communication with the person performing it. You know what the great thing about being awake is? If it hurts, you can say something. And the practitioner can then do something to make it stop hurting. Practicing on an unconscious woman may mean she doesn't feel any pain, but it doesn't mean you've learned how to do the job without causing any. Nor how to deal with a patient who just can't relax, no matter how many times you explain that the process would go much more smoothly if she did; an unconscious woman isn't instinctively clenching her muscles while trying to act cool. An unconscious woman also isn't going to be able to tell you that the speculum is freezing or you need more lube or that, say, she's a sexual assault survivor who finds pelvic exams traumatic. And above all, an unconscious woman cannot give you permission to put things in her vagina.

The idea that letting unskilled people perform a "delicate, invasive examination" on women who have not consented, don't know it's happening, and cannot tell the student to stop is a good thing for women -- no pain! no embarrassment! -- is so patently offensive and ass-backward, I don't really know where to begin. I can appreciate the concern that too few conscious women would volunteer to be guinea pigs for inexperienced speculum operators, but A) that's still no excuse and B) it's not necessarily a problem anyway; a survey of patients in a pelvic disorders clinic found that "Sixty-two per cent of respondents said they would consent to medical students doing pelvic exams, and an additional 5 per cent said 'yes' but only if a female student was doing the exam." It turns out all you have to do is ask. But even if that weren't the case, says Picard, "There are other ways to do this training, using simulation models, paid volunteers and consenting patients in other settings such as clinics." There is simply no justification for treating unconscious patients like plastic models or cadavers. And I can't help  wondering: Is this how Canadian medical students learn to do rectal exams as well? How about dental training -- do they figure it's best to practice wielding all those pointy instruments on people who are knocked out before graduating to conscious patients? Or is it only women's bodies that are considered property of the medical facility once the anesthesia kicks in?

"This is the result of a failure to communicate," writes Picard. "It is also a striking example of a lingering bit of paternalism that is still all-too-present in medical culture." Even if the U.S. already has appropriate guidelines on this particular issue, those examples of forced cesareans, not to mention forced sterilizations, forced ultrasounds, and oh yes, forced births -- illustrate that we're still suffering from the same paternalistic medical culture and deliberate lack of communication with people who reasonably expect to have the final word on what's done to their own bodies. At least, we are when those patients are women, and the decision in question is regarding their reproductive organs. Really, the thing that surprised me most about Picard's article is that it isn't happening here.