In Illinois, a former federal prosecutor and a banker battle over who's the best face of 2010 reform. 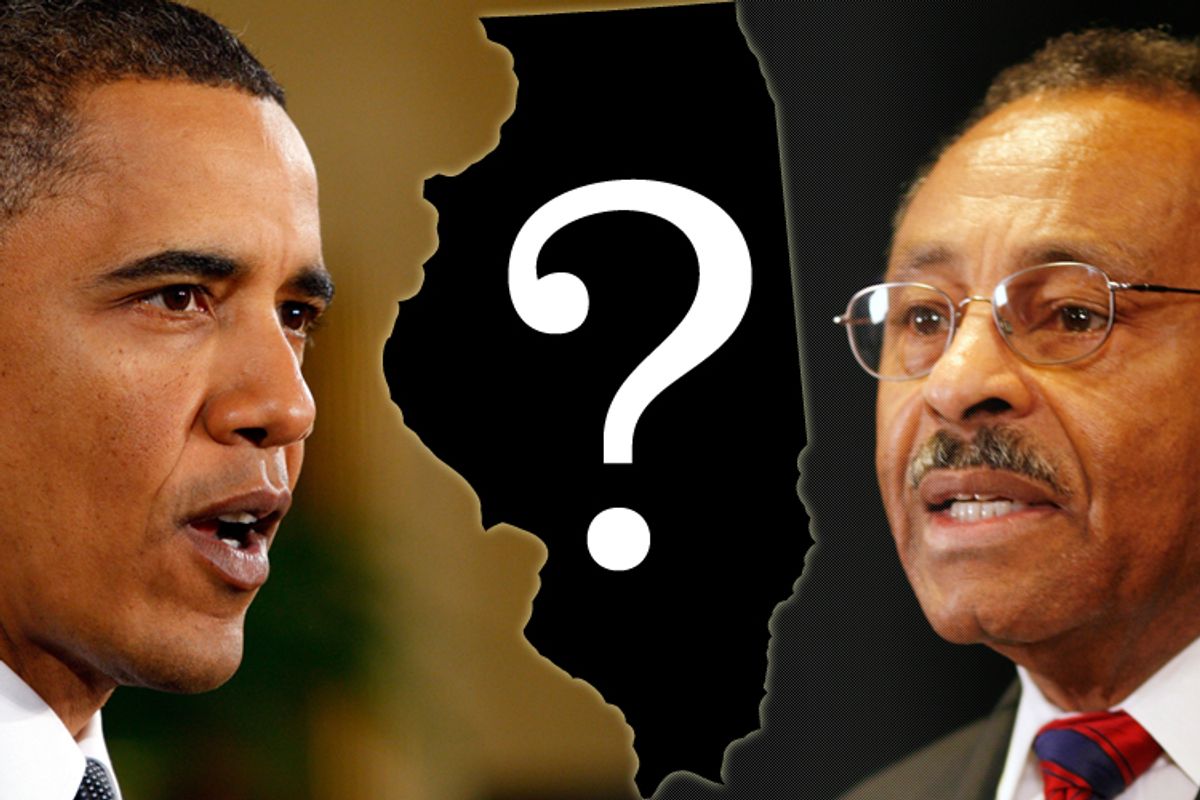 Illinois has a special place it sends honest politicians -- the reformers, the independents, the Eliot Ness wannabees. Paul Simon was exiled there for a dozen years. So was Barack Obama, although he got out as fast as he could. It’s called the United States Senate, and it’s located in Washington, D.C., 800 miles from Springfield. When the goody-goodys are that far away, they can't keep an eye on the shady business in the state capital. Being a senator is not as lucrative as being governor, but the title looks good on your tombstone.

David Hoffman is hoping to become the next Prairie State busybody to win a six-year timeout in Washington. He has the perfect résumé. A 42-year-old former federal prosecutor and Chicago inspector general, Hoffman made a name for himself with a blistering investigation into Mayor Richard M. Daley’s billion-dollar deal to sell the city’s parking meters to a private firm. He even served on the oxymoronic Illinois Reform Commission, a do-gooder panel convened to clean up the state after Rod Blagojevich decided Obama’s vacant Senate seat was a "fucking golden" opportunity to make some money. And, of course, Hoffman has received the endorsement of every nosy newspaper in Illinois, from the Chicago Tribune  on down to the Springfield State Journal-Register.

Hoffman is running in what may be this year’s most-watched Senate election. Obama’s old seat is on the ballot, and losing it would be an enormous embarrassment to the White House, far worse than Scott Brown’s victory in Massachusetts last week. In the Feb. 2 Democratic primary, Hoffman is battling State Treasurer Alexi Giannoulias, a 33-year-old banking heir, and Chicago Urban League president Cheryle Robinson Jackson, a former press secretary to Blagojevich. The winner will take on U.S. Rep. Mark Kirk, a suburban moderate who will be the Republicans’ strongest Senate nominee in decades.

“This election for this Senate seat is going to be watched all around the country, because it’s our president’s Senate seat, because it relates to our latest corruption scandal, our second straight governor charged with corruption for, among other things, trying to sell this seat,” Hoffman told a small State of the Union watching party in the Chicago suburb of Elmhurst.

While many observers consider Hoffman the Democrats’ best chance to hold onto Obama’s seat, he’s trailing in polls. On Monday, the Chicago Tribune reported that Giannoulias held a 15-point lead.

That was the good news for Giannoulias this week. On Wednesday, the bad news came down. Broadway Bank, which is owned by Giannoulias’ family, entered into a consent order with federal regulators.  The bank, which is holding millions of dollars in delinquent real estate loans, was ordered to replenish its cash reserves -- out of the Giannoulias family’s pockets, if necessary.

The FDIC also ordered the family to stop paying itself dividends without regulators’ permission. In 2007 and 2008, the Giannouliases took $70 million out of the bank. Alexi himself received $2.5 million.

Giannoulias called a press conference to discuss the bank’s troubles, but refused to reveal whether he had approved any of the bad loans.

“If I’m fortunate enough to make it out of the primary, we can have that conversation,” he told reporters.

“That conversation” is what some Democrats are worried about. If Giannoulias wins, they expect Republicans to spend the next nine months running grainy, black-and-white ads on Broadway Bank’s problems.

At a wake last week, I ran into a prominent Chicago Democrat who had endorsed Giannoulias.

“Alexi looks unbeatable in the primary,” he said, when the talk turned to politics.

"But can he beat Mark Kirk?" I asked.

The man grimaced and shook his head. "I don’t know," he said.

Kirk, the likely Republican nominee, has survived a decade in a North Shore congressional district that voted for Al Gore, John Kerry and Obama. He’s exactly the kind of moderate Republican who wins in Illinois, although he has been moving to the right as he seeks the GOP nomination. Kirk voted for the cap-and-trade legislation (but now says he’d vote against it as a senator), and stopped an Indiana oil refinery from releasing more sludge into Lake Michigan. He opposed the Iraq surge, and had a nearly perfect abortion rights record until he voted for the Stupak Amendment.

"It’s a problem," said Carol Davis, a suburban township chairwoman. "Kirk is not a teabagging maniac."

When Alexi Giannoulias ran for treasurer, in 2006, then-Sen. Barack Obama gave him a big man-hug in a TV ad. They were basketball buddies -- Giannoulias played professionally in Greece -- and Giannoulias raised money for Obama in the Greek community. But after Giannoulias announced for Senate last year, the president’s inner circle spent the summer desperately searching for another candidate. First, Obama invited Attorney General Lisa Madigan to the White House. When Madigan said no, Chief of Staff Rahm Emanuel tried his arm-twisting tactics on Cook County Sheriff Tom Dart. Dart also declined.

The 2010 Senate election will take place at the same time as former Gov. Rod Blagojevich’s corruption trial, and Democrats fear Giannoulias can’t stand up to a Republican attack on ethics. From 2002 to 2006, Giannoulias was chief loan officer at Broadway Bank. As the Chicago Sun-Times reported, the bank loaned $10 million to an alleged Russian Mafia member who has pleaded guilty to federal money-laundering charges. The bank has also foreclosed on $12.9 million worth of properties owned by two men who have variously been convicted of bookmaking and pimping. And Broadway Bank loaned $1 million to Tony Rezko, a name Obama never wants to hear again.

In an interview with Salon, Giannoulias deflected the question of whether Republicans would make Broadway Bank an issue.

Giannoulias does have a strong record on jobs. As treasurer, he threatened to pull state business from Wells Fargo if it sold bankrupt Hartmarx -- the president’s suit maker -- to a bidder that would liquidate the company. Hartmarx employs 4,000 Americans.

But in year when Illinoisans are feeling burned by political corruption, "I think Hoffman would be a stronger candidate against Kirk," said Chicago political consultant Don Rose. "He’s unassailable on ethics, and he’s associated with reform, and he’d have the money in a general election."

Hoffman, who has so far raised $2.5 million, only began airing TV ads in Chicago on Monday. Illinois moved its primary to early February in 2008, to help Obama on Super Tuesday. With only a month to campaign after New Year’s, there’s little time for an unknown candidate to make an impression.

"Obviously, everyone’s very concerned around the country now as Democrats about whether we’re going to lose this seat and other seats around the country for the same reason as Massachusetts," Hoffman told Salon. "I think it’s going to be twice as difficult in Illinois, because not only do you have the same dynamic that results in anger from people toward the party that’s in power, but here, you lay on top of that anger at the corruption scandals that produced so much cynicism and frustration. When people see the governor trying to sell this Senate seat, it makes them very angry. If we’re really serious about keeping the seat as Democrats, we really need a nominee who doesn't allow Rezko or Blagojevich or any of these other problem players to be brought in."

Besides money, Hoffman has several other disadvantages. He does not come off well on television. He’s short and slight, with a high-pitched voice and baggy suits that make him resemble a high school debater. During a televised debate this month, Hoffman attacked Giannoulias for his alleged mismanagement of Bright Start, a college investment fund that lost $150 million last year. It was a cheap shot, since almost all states’ investments lost money in 2008 and 2009, and Hoffman came off as more tattletale than corruption-buster.

Giannoulias has far more institutional support. Hoffman’s State of the Union party took place in a living room, with 20 people in attendance. Giannoulias has been endorsed by half the Democrats in the state Legislature, half the Chicago City Council, and most of the big unions. This Saturday, the Teamsters are throwing him a get out the vote rally in Chicago.

Both Hoffman and Jackson have been gaining in the polls, but the calendar is running out. On Wednesday, a Rasmussen poll showed Giannoulias at 31 percent, Hoffman at 23 percent, and Jackson at 13 percent, with 9 percent favoring another candidate and 24 percent undecided. (Jackson’s best hope is to repeat Carol Moseley-Braun’s feat of sneaking in between two catfighting white guys.)

Another poll this week showed Giannoulias with a 42-34 lead over Kirk in a general election matchup. Giannoulias is using that to counter the electability issue, but can that lead stand up to months of negative ads?

Giannoulias says he plans to attack Kirk as a D.C. insider who voted for "some of the worst budgets in this country's history, the Bush/Kirk budgets that have caused the most severe economic recession since the Great Depression."

It could be, as a legendary Springfield creature once put it, that "ethics comes next to athlete’s feet when it comes to tripping the public’s trigger. Only the media cares about ethics." Or it could be that Illinoisans will rally around any Democratic nominee, to avoid embarrassing their president. The GOP is hoping for neither. Kirk, who has no serious primary opposition, has been keeping a low profile and saving his money. Republicans eager to snatch Obama’s seat will be pouring millions of dollars into Illinois, Don Rose predicts.

"Kirk is going to have a faucet," Rose said. "There’ll be enough money to totally pound Giannoulias, day in and day out."

Edward McClelland is the author of "Young Mr. Obama: Chicago and the Making of a Black President," to be published in October by Bloomsbury.