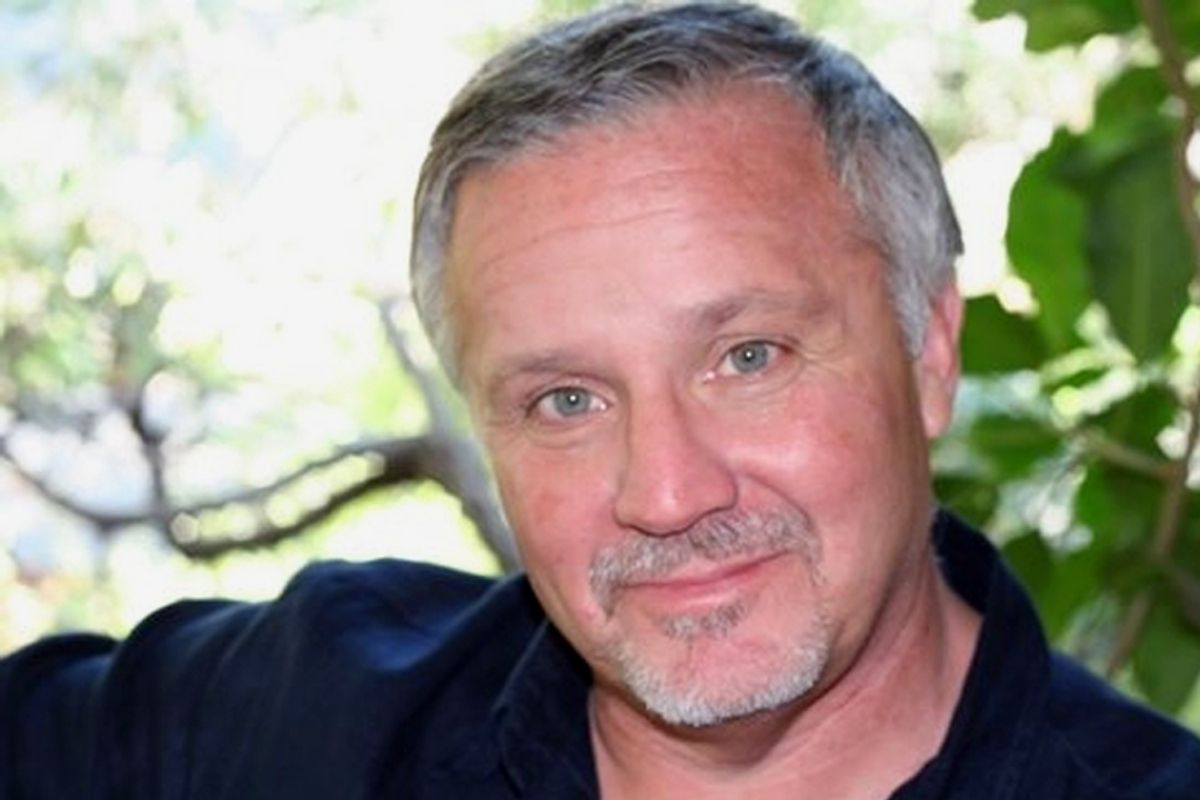 Greg Critser, author of "Eternity Soup: Inside the Quest to End Aging"
--

America is getting older. The baby boomers are approaching retirement age, 1 million people currently live in nursing homes or assisted living centers, and by the year 2050, there will be a jaw-dropping 88 million senior citizens in the United States. Unsurprisingly, this demographic change also means that more and more Americans are looking for ways to live longer — and more companies are selling them ways to do it.

As Greg Critser explains in his thoroughly researched and highly entertaining new book, "Eternity Soup: Inside the Quest to End Aging," much of this anti-aging movement is based, at best, on questionable science and, at worst, self-serving greed. Critser spends time with the Caloric Restriction Society, a group claiming that mild, sustained starvation leads to an increased life span (and whose chief science officer says that you should really forgo dinner tonight and go on a nice long walk). Critser tries testosterone, a hormone that some argue can stave off the effects of aging in men, and visits a British academic who says that if we could learn to repair the damage to our battered organs, humans could live hundreds of years.

Salon spoke to Critser over the phone about America’s obsession with staying young, why aging should be considered a disease, and whether the calorie restrictors’ self-imposed starvation really means they'll outlive us all.

Why has the anti-aging industry gotten so much bigger over the last two decades?

Since the early '90s, there have been a couple of medical societies promoting the idea that aging is a disease that can be stopped or slowed down. On the scientific side, the accepted idea that there were genetic limits to how long a mammal or organism can live has been completely overturned. We now know that life span can be lengthened in lower orders and mammals. There was a very famous, fairly small, study of human growth hormone (HGH) in the early '90s that showed dramatic changes in men who were over 70. It made it sound like HGH could halt or slow aging, which became the fuel for the emergence of the modern anti-aging medical industry.

Where does the idea come from that aging is a disease?

There’s a difference between aging metabolically and physiologically and the cultural understanding of aging. Cicero himself said we should treat aging as a disease. If you look at the various processes of aging, from buildup of plaque to loss of blood pressure, those are diseases. The reason we technically don’t refer to aging as a disease is because those processes are not universal. Some people age for different reasons. Many scientists think we should really focus on extending the healthy life expectancy, but it’s not out of the question that we expand the maximum life span.

What’s the difference between maximum life span and life expectancy?

Maximum life span is the foreordained maximum number of years that is possible for an organism to ever live. In humans it’s believed to be about 120 years, and there’s even a biblical maxim that refers to it. Maximum life expectancy is the maximum number of years that you can expect to live. In humans it’s in your 70s for men, and in the 80s for women.

Aren’t the elderly going to be offended if we start calling them diseased?

The people who founded the legitimate study of aging, called gerontology, and professionalized it in the '70s and '80s, did so with something of a legitimate social agenda. Old people are and were marginalized, and language marginalizes people, and so there’s the idea that we shouldn’t call it a disease because that’s ageism. We might be beyond that now. It’s less about marginalizing, because those people are in control.

There also seems to be a cultural shift — I’m thinking of plastic surgery and Botox — in America toward celebrating a kind of agelessness.

Sophia Loren was recently on the cover of Modern Maturity. For my generation [in my 50s], that’s pretty remarkable. I think there’s a perception among advertisers that youth-based culture isn’t going away, but it’s clearly competing with an elderly culture. Advertising people are fascinated by this, and there’s the general cultural shift in terms of medicine — that it’s something that can be bought, that it’s a product.

Part of the American ethos to me is about being able to do anything as long as you work hard and have money. Do you think this obsession with anti-aging is particularly American?

I agree that we have an optimistic, pragmatic culture. If you go to Europe you’ll find plenty of anti-aging societies, but you don’t find the level of expenditure that you see here. I think in the U.S. alone it’s a $50 billion industry. That’s the difference: Americans are willing to spend money on it.

The "caloric restrictors" believe they can live longer if they always let themselves be a little hungry. Where does this idea come from?

It’s the idea that, basically, eating less than what you desire will increase longevity. It comes out of the Renaissance and a guy named Alvise Cornaro, who probably had type 2 diabetes. He was told that he would soon die, and his doctor said the only thing that might work is if he restricted his diet. He did that, doubled his life expectancy, and died at 83.

The first scientific documentation of this doesn’t come until the early '30s and a researcher named Clive McCay, who experimented with fish and mice and found he could almost double their life span by restricting calories. Then a scientist named Roy Walford, a bald-headed Fu Manchu-mustached fellow at UCLA, claimed that this phenomenon persists across species — rats mice, lower orders — so there’s no reason it shouldn’t cross over to us. That’s where the Caloric Restriction Society comes from.

But there’s no proof that this works in humans, right?

Yeah. This is all a big experiment. I traveled in this circle as long as I could — before I got hungry for pizza. They’re a very scientifically engaged kind of people. They like debate and being told they’re wrong. There’s a lot of tolerance, but they’ve decided this is for them, mainly because they could be on the vanguard of doubling life expectancy.

The whole thing seemed a little bit cultlike to me.

I think there are cultish aspects to it, but if it’s a cult, it’s a very unusual one in that it invites scrutiny. The cultish aspects are driven by their belief in anti-aging science —but there’s some weird stuff going on, like their being willing to be cold and not have sex and eat this very spare bland diet. It’s very countercultural. Our culture says imbibe as much as you can, and fuck as much as you can.

There also seems to be little evidence that human growth hormone and other hormones help people live longer — but some doctors are making a lot of money telling people just that.

They’re asking us to base our lifestyle decision on very inconclusive science. They’re saying, "We’re probably right, so let’s try." There’s no doubt about it, money drives it, and the aging of the physicians. A lot of them are sick of dealing with insurance companies and wanted a cash-only business, so they looked around and saw this cohort of older people who didn’t like being old.

You took testosterone, as you describe in the book. What did you take away from the experience?

I took testosterone cream, and I benefited in a very modest fashion. I had slightly more energy, and it seemed to eliminate a lot of grumpiness I had because of a concussion I suffered. I had a little more muscle tone. The sex drive has never been an issue. In general, it was safer than I ever thought it was, but it was more modest.

Hormones can also be tremendously expensive.

HGH can be $ 900 to $1,000 a month. Testosterone is $90, and I have a health savings account that pays for it. What’s expensive is you have to pay the doctor $250 for monitoring for a month. But you also end up often being sold $ 200 to $300 of supplements that even the doctors don’t take. I had a nurse basically come into the dressing and try to sell me acacia berry.

A lot of these anti-aging products probably wouldn't be covered by universal healthcare. How do you think their growing popularity is affecting the healthcare debate?

Well, I went to the anti-aging medical society conference in Las Vegas, and the main speaker was Ron Paul. These people loved him. They love anti-aging medicine and hate government, yet if you told them Medicare may pay for it, they’d be thrilled. This country is so fucking childish. It doesn’t know what it wants. It just wants to be angry. I think sex hormones should be paid for. Most health plans here will pay for hormone replacement in women. For men the protocols are not as worked out. In a public healthcare system, hormones may have an important role to play, but there’s probably a lot more epidemiology that has to be done.

Why do we know so little about how things affect the human life span?

Humans live a long time. Rodents live three years. You can get a lot of data and many studies over the lifetime of an academic from rodents, and you might get one study out of humans. Plus, you can’t quite experiment as much as you want with humans.

So basically most of this science is just a crapshoot?

It’s a big problem. I’m going to say something that will probably get my house bombed: If you want to do a real study on this, you’re going to have to figure out a primate or a New World monkey to work on. They’re closer to us, and they have a life span that's similar to ours for their size. But you know what happens when you start playing around with monkeys.

Has researching this book changed your attitude toward your own aging?

It may be a sign of my superficiality that I tend not to think about mortality too much. What’s changed is my appreciation of how complicated science, and particularly the science of the human body, is and how marvelous it is. As far as how I take care of myself, it’s the same as when I wrote "Fat Land," about obesity. A lot of your basic health is in your hands.