A $1.6 trillion deficit underlines the brutal state of the economy. But a rising GOP star has a plan! 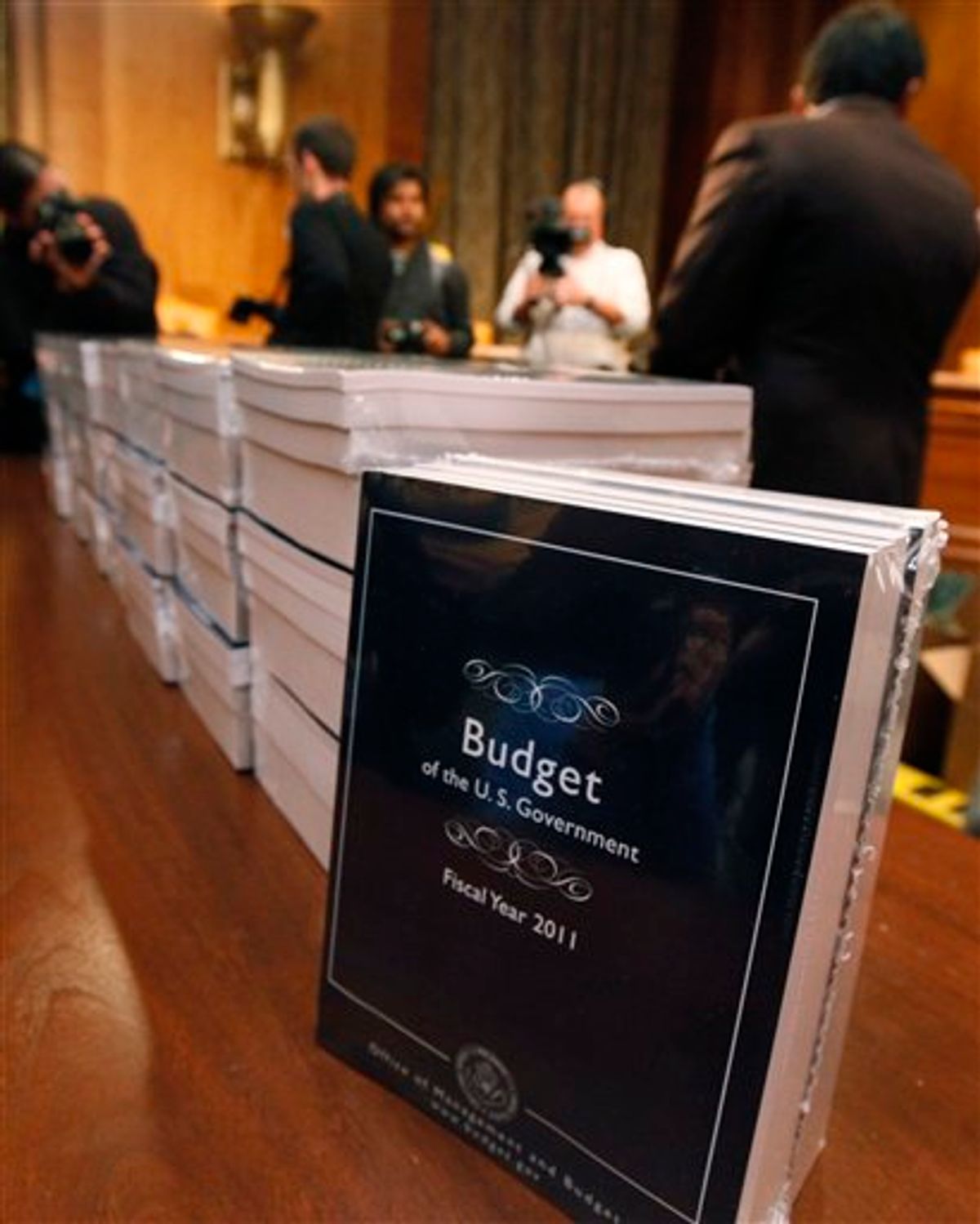 Copies of President Barack Obama's budget are seen on Capitol Hill in Washington, Monday, Feb. 1, 2010, as it was delivered to the Senate Budget Committee. (AP Photo/Manuel Balce Ceneta) (AP)
--

Within nanoseconds of the release of President Obama's new $1.6 trillion budget, Republicans started screaming about the White House's' "lip service" to concern about the deficit -- proof, once again, of the fantasy-land currently occupied by the GOP.

The numbers are big, for sure, and should alarm anyone already worried about the long-term sustainability of U.S. finances. But the fact is that this budget underlines the unpleasant reality we currently face. Looking forward, Obama's new budget includes significant tax increases, the end of two wars, a fully recovered economy, and that still won't bring the annual deficit down below $700 billion-$800 billion.

Hedge-fund and private-equity traders who now see their fees taxed as capital gains would have their income taxed at income-tax rates, at a cost of $24 billion over the decade. And multi-national companies would pay an additional $122 billion on earnings overseas, a proposal Mr. Obama made last year that went nowhere amid furious business opposition.

With those plans in mind, let's turn to a balanced budget proposal from Minnesota Gov. Tim Pawlenty, a potential GOP presidential candidate in 2012. Pawlenty says the debate over the deficit "is no longer between competing political philosophies -- it is a matter of basic mathematics."

Pawlenty then calls for a balanced budget to the amendment to the Constitution and simultaneously recommends that "the Bush tax cuts should be made permanent and tax burdens on individuals and businesses should be further reduced."

So who exactly is it who doesn't have a handle on the math? As Bruce Bartlett observes in a blistering rebuttal to Pawlenty, the governor's numbers don't even begin to add up.

It's one thing to require a balanced budget when starting from a position of balance or near-balance. It's quite another when we are running deficits of over $1 trillion per year for the foreseeable future. Even if we were not in an economic crisis and fighting two wars and responding to a natural disaster in Haiti, a rapid cut in spending of that magnitude would unquestionably throw the economy into recession just as it did in 1937.

It's doubtful that Mr. Pawlenty has any clue as to the composition of federal spending. In FY 2009 we would have had to abolish every discretionary spending program, including national defense, to balance the budget and that still wouldn't have been enough without a penny of higher revenues, as he insists. We would have had to cut more than $300 billion out of Medicare and Social Security as well. Good luck with that.

The fantasy that there is any path to budget stability without higher taxes is utterly deluded. But there's one point at which I have to diverge from Bartlett: He finishes his disembowelment of Pawlenty by claiming that his platform is too "transparently phony" for even "the right-wing tea party/Fox News crowd." I have no idea what makes him so confident on that point. The GOP, responsible for engaging in massive tax cuts, wars and a huge healthcare giveaway (the Medicare-D prescription drug benefit) without making a semblance of an effort to pay for any of them, is now campaigning as the party of fiscal responsibility. How much phonier can you get?

That's an illusion. Reality is the new budget. A budget that doesn't do nearly enough to stimulate the economy, because the hole the government already is in is so big it's almost impossible to see how we can climb out.