Ladies rule the evening, and while Taylor Swift wins the big award, it's Beyonce and Lady Gaga who steal the show 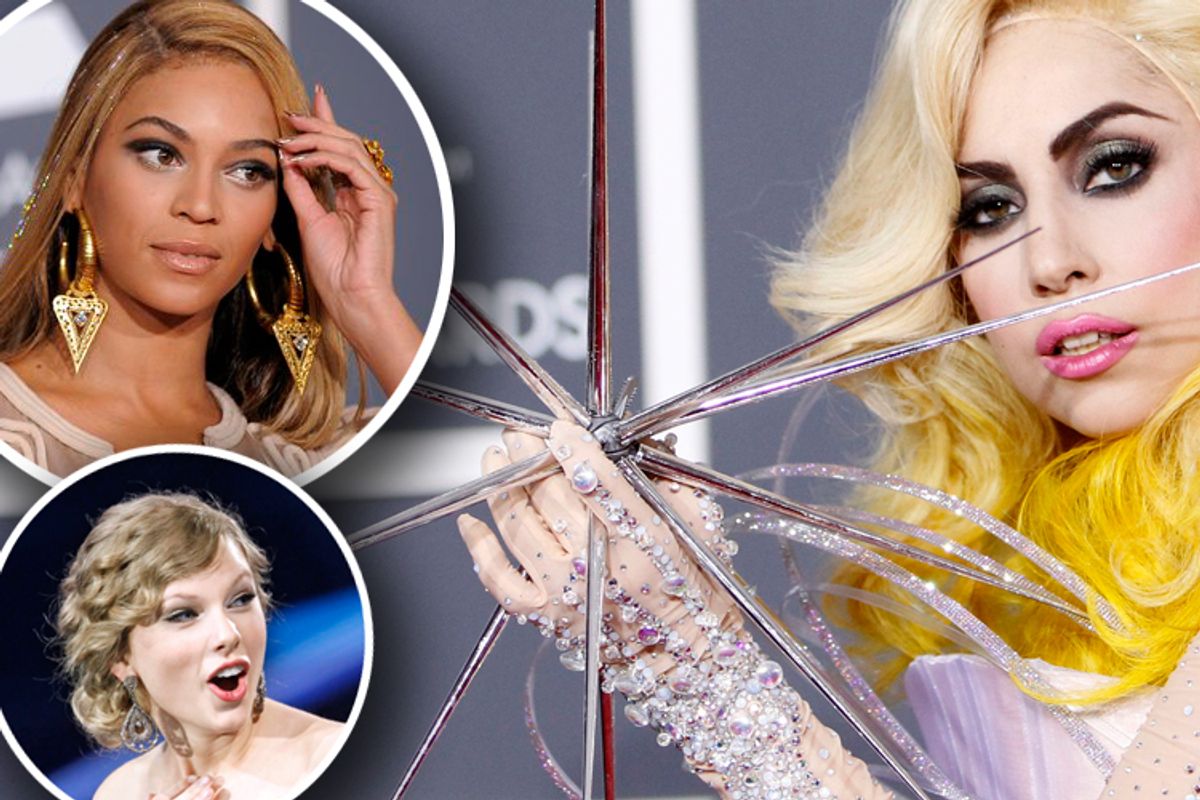 It's fashionable to trash the Grammys, almost as fashionable as trashing the limping, out-of-touch recording industry itself. Even in the pantheon of awards shows -- a world so vanilla that Ryan Seacrest is a rock star -- the Grammys are fuddy-duddy, clinging to nostalgia and soft-listening snores, the winners beamed in from Planet Boring. 2009's album of the year? Robert Plant and Alison Kraus. In 2008? Herbie Hancock. What a shocker that turned out to be! Not that Herbie Hancock won the honor, but that he was still alive.

Still, I'm finding it hard to be grumpy about this year's Grammys. Sure, the ceremony was at least 30 minutes too long and larded with some yawners (Andrea Bocelli with Mary J. Blige yell-singing "Bridge Over Troubled Water" for the people of Haiti? Time to check my e-mail.) Sure, I was hoping for more Kanye West punch lines. But from Lady Gaga's opening salvo to Beyoncé getting freaky-deaky to Taylor Swift's final, teary acceptance speech, you could certainly do worse for an evening of musical entertainment than this. Here are the 10 most memorable moments.

There she was on the red carpet wearing a Christmas tree ornament by Armani. There she was onstage, like the spawn of Flash Gordon and Christina Aguilera. There she was in the audience, patiently losing all major awards while wearing the Chrysler Building. Love her or laugh at her, it's fantastic to see a performer who needs less double-stick tape for her outfits than Elmer's Wood Glue.

Her opening performance of "Poker Face" had a bit of grating gimmickry -- including a hype man crying "she's a monstaaah!" -- but it was forgiven when she reemerged on the stage with Elton John to perform a moving version of Gaga's "Speechless" that segued into Elton John's classic "Your Song." Two flamboyant, glitter-loving freaks turned gay icons: Now this is how you open a stuffy awards show.

Oh, also how you open an awards show: Send Stephen Colbert out to tell some jokes. Colbert (who later won his own Grammy for best comedy album) had the good sense to make fun of the festivities. "You may be the coolest people in the world. This year your industry was saved by a 48-year-old Scottish cat lady in sensible shoes," said Colbert, referring to Susan Boyle.

8. Don't want to be an American songbook idiot

Back when Oakland stoners Billie Joe Armstrong, Tre Cool and Mike Dirnt were singing about the joys of masturbation, it was hard to predict they'd become one of world's most important bands. Now Green Day (who won best rock album for "21st Century Breakdown") are leaping onto a different stage, collaborating with the artists behind "Spring Awakening" to bring the rock-opera masterwork "American Idiot" onto the Great White Way. "Four worst words in the English language: Green Day Broadway musical," a friend texted me as the band performed "21 Guns" with what looked like the cast of "Rent." But as someone who knows all the words to both "Jesus of Suburbia" and "Seasons of Love," I can think of worse ways for three rockers to spend their 40s than trying to make Broadway cool. Could the My Chemical Romance musical be next?

7. No country for old superstars

I always felt bad for Pink that the night she performed a jaw-dropping version of "Sober" on the VMAs -- literally twirling and flying upside down -- happened to be the same night Kanye West opened his pie hole in the first five minutes and sucked all the energy out of the room. So here she is again with her Cirque du Soleil extras, performing a quite literal version of "Glitter in the Air" and wearing not much more than nylon straps. She hangs from the sky in a bedsheet. She gets dipped in water and sprinkles the audience. It's like "Flashdance" meets a topless car wash. Afterward, the audience leaps to their feet. India.Arie looks like she just saw god. Attention, Fox programming: Is it time to reconsider "Circus of the Stars"?

In a category that found favorites Lady Gaga and Beyoncé and Taylor Swift vying for the title, the award went to a band of brothers known for their good old groupie-banging, vodka-swilling ways. The Kings of Leon's "Use Somebody" is a genuinely great record, and it might be the only song played more often on the radio in 2009 than "Poker Face." Said lead singer (and one of Salon's Sexiest Man winners) Caleb Followill, "I'm not gonna lie, we're all a little drunk, but we're happy drunk." Looks like someone's been hanging out with Taylor Swift.

I have no idea what the much-hyped Michael Jackson "Earth Song" tribute looked like if you were wearing 3-D glasses. Funny enough, I didn't have a pair sitting around the apartment. Did Celine Dion leap out from the screen? Did Smokey Robinson look alive? But this "future is now" interlude made for some hilarious audience shots, will.i.am and Rihanna trying to look tough in designer duds while sporting red-and-blue plastic goggles.

It's a bit baffling that the producers opted not to use footage of the real Michael Jackson -- some of the most effortlessly entertaining, poignant archival reels in all of pop history -- and instead went with a feel-good, butterfly-and-waterfall utopia more reminiscent of "Avatar." But though Jackson died before seeing the James Cameron juggernaut, I have a feeling he would have identified. Think about it: A man who sleeps in a hyperbaric chamber of sorts, feels more comfortable in an imaginary world than his own, loves wild animals and hopes for world peace. Is it possible that Michael Jackson didn't die, he just went to live with the Na'vi?

Afterward, Jackson's two eldest children appeared to accept a lifetime acheivement award, looking understandably nervous and scripted. "Daddy was supposed to be here. Daddy was gonna perform but he couldn't perform last year," said a teary Paris. "Thank you, we love you, Daddy."

3. The reports of hip-hop's death were greatly exaggerated

A rather comically enthusiastic Quentin Tarantino introduces newcomer Drake, who is joined and quickly upstaged by an antic Lil Wayne and a rapid-fire Eminem. What the hell Em is saying? For all I know he's selling us car insurance. Point is, it's mesmerizing. Drake gets lost in all the bombast and the wild flashes of light, but he's still the coolest graduate of Degrassi Junior High.

The Grammys loves female singer-songwriters -- Norah Jones, Alicia Keyes and Lauryn Hill all went home with armloads of the statues. And so 19-year-old Taylor Swift predictably wins the album of the year (and best country album) for "Fearless." And can we really complain? Swift's sweetly strummed high school valentines are simple, catchy fun. It was clearly her year.

Swift's mid-show performance with Stevie Nicks proved that, as a performer, she's got a lot of growing to do to catch up with her competition. She was off-key and a bit too bland in a set that started out with "Today Was a Fairy Tale" and segued into Fleetwood Mac's "Rhiannon." Talk about outclassed. And it was somewhat cringe-inducing to watch the great goddess Stevie Nicks reduced to singing harmony on a song about cheerleaders and cute boys (the much-nominated "You Belong With Me"). But Swift is still growing into her talent, figuring out who she is and what she wants to say. I've heard young women gripe about the fairy-tale imagery of Taylor Swift's songs, but they seem to miss the most important message Taylor Swift offers to young girls (or boys, for that matter) -- that they can pick up a guitar and write their own songs.

And Swift's surprise and humility seemed genuine. "When we are 80 years old and we're telling our grandkids the same stories over and over again, this is the story we're going to tell," she said, closing the show.

Taylor Swift may have won album of the year, but Beyoncé went home with the most -- six statuettes (including song of the year for the cracklingly good, instant-classic "Single Ladies"). And in an evening of YouTubable performances, hers was the most righteous.

Beyonce's version of "If I Were a Boy" started where most songs end up -- with a growling burst of melisma, followed by a macho grabbing of her crotch. But that was only the beginning. Performing in what seemed to be a Sasha Fierce fugue state, she started with that gender-bending ballad -- sung with no small sneer on a night when the awards and performances were dominated by women -- and then launched into a cover of Alanis Morissette's eff-you anthem, "You Oughta Know." Why? Who knows? Let's just go with it.

And go with it Beyoncé did. The performance started out with Beyonce flanked by men in military garb, but it ended as a Girl Power freakout: Girls on sax, girl on drums, Beyoncé not so much hitting a note as strangling those suckers, whipping her long hair around her face, grinding on the floor, shaking her rump. Surely somewhere, dogs were howling and young people were doing it and women across America dumped their boyfriends, strapped on 6-inch heels and ovulated in a particularly sassy way. All I kept wondering was how the greatest performer of the day could be so beautiful, so angry, so badass all at once.