Darwin, Warhol and Proust -- what history's greatest worrywarts got out of being "sick" 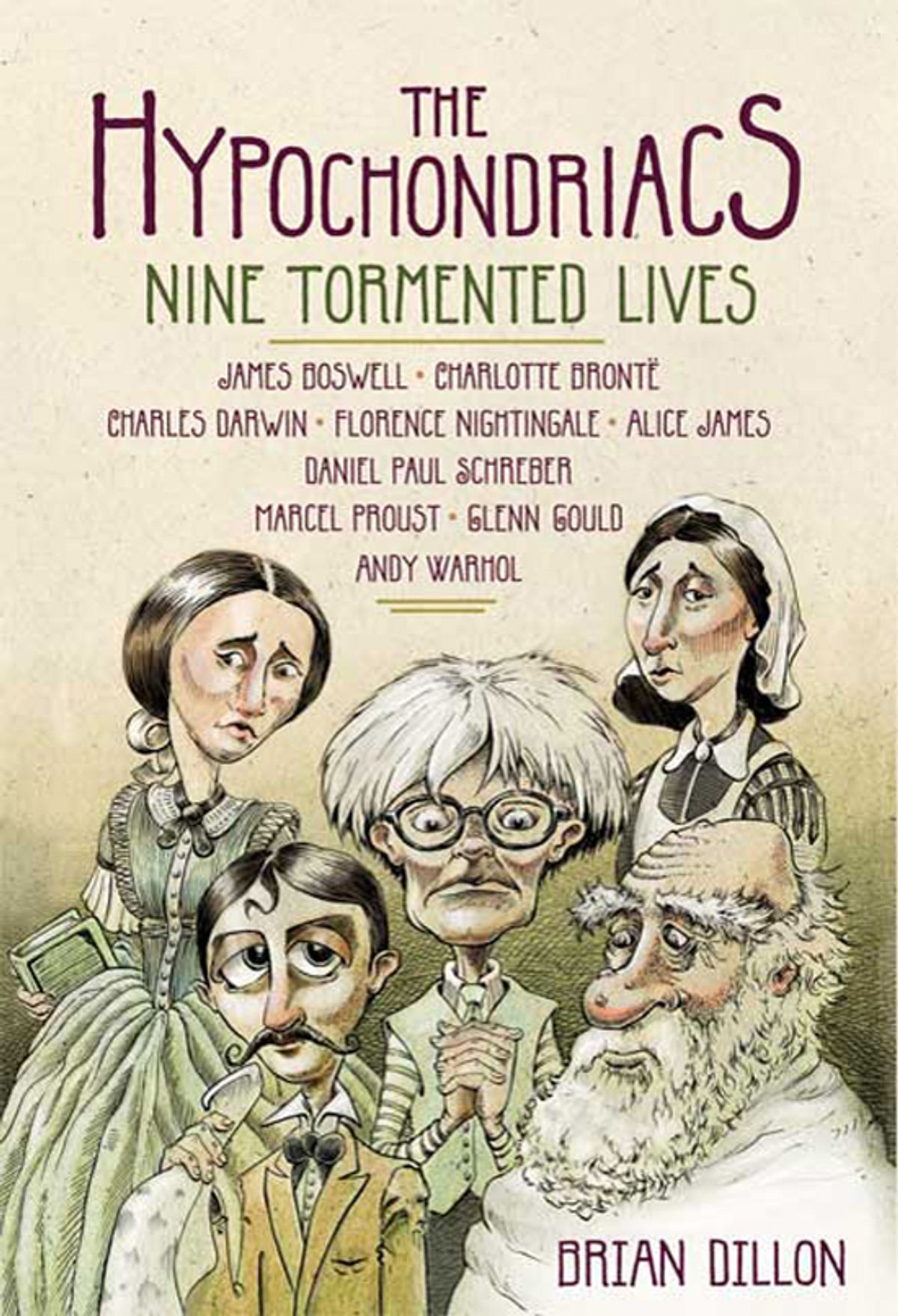 Tyrannical invalids are a mainstay of literature -- the gold standard being Aunt Ada Doom in Stella Gibbons' classic comic novel, "Cold Comfort Farm" (highly recommended, as is the 1995 film starring Kate Beckinsale), who dominates her family from the bedroom where she has remained, largely unseen, since beholding "something nasty in the woodshed" as a child. Creative types know all about how an apparent weakness can be parlayed into a strength; many were sickly, shy or merely unathletic kids who turned to pen, paintbrush or chemistry set for consolation. What good is sitting alone in your room? Let us count the ways. As Brian Dillon, an Irish journalist and the author of "The Hypochondriacs: Nine Tormented Lives," sees it, there's an "obvious and intimate link" between "health anxieties" (well-founded or not) and the genius of his celebrated subjects. For them, "hypochondria was both an illness and a cure."

At heart, "The Hypochodriacs" is a collection of biographical sketches focused on the eccentric and often perverse behavior of nine remarkable, talented people: James Boswell, Charlotte Brontë, Charles Darwin, Florence Nightingale, Daniel Paul Schreber, Alice James, Marcel Proust, Glenn Gould and Andy Warhol. Dillon writes the sort of refined, slightly rarefied prose that might have once been called belletristic -- an old-fashioned word for an old-fashioned but pleasant style. This balances out the freakish complaints and treatments undertaken by his subjects, and so "The Hypochondriacs" walks the line between voyeurism and thoughtfulness with considerable dexterity.

Dillon begins each chapter with a vivid scene -- say, the morning that Celeste Albaret, who would become Proust's devoted attendant for the final nine years of his life, first performed the fraught task of bringing the novelist his second croissant of the day. Proust, who was asthmatic, had the habit of burning "medicinal powders" in the cork-lined bedroom he seldom left, and he kept his heavy curtains drawn against the daylight, so Albaret tiptoed through a dim room filled with thick fog to a bed that seemed to be "floating in space."

Or there's the afternoon that a scarf-swathed Gould dropped by the offices of Steinway & Sons to discuss their ongoing efforts to build or modify a piano to his "exacting, idiosyncratic and often contradictory requirements." The company's burly chief concert technician made the mistake of patting the pianist ("gently") on the shoulder. This set off a stormy series of exchanges in which Gould threatened legal action, claiming that the resulting "injury" had "pushed down" his shoulder blade and "compressed and inflamed or whatever" the nerves controlling two of his fingers, obliging him to spend four weeks in a full body cast and cancel a string of concerts (that he hadn't wanted to play to begin with).

Not all of the conditions Dillon describes fit our contemporary definition of hypochondria -- that is, a chronic anxiety over imaginary illnesses. It turns out that the word "hypochondria" has been around for hundreds of years and has been used to describe maladies both organic and psychosomatic. For Boswell, hypochondria was a sort of mood disorder that kept him from adhering to the rigorous schedule of work he set for himself; among other things, it took the form of a morbid dread of the Dutch city of Utrecht, where he was supposed to be studying law. He got up every day and made lists and schedules, reproaching himself for not sticking to the previous day's resolutions. One of the qualities that has made Boswell so endearing across a span of nearly 250 years is how much his misery resembles that of any aspiring writer seeking to impose an unrealistic regimen of self-discipline. "No matter how carefully he laid his plans in the morning," Dillon writes, "his life was a series of lapses."

For Brontë, however, the "nervous" disorder she called hypochondria amounted to a temperamental susceptibility to depression and melancholy that set her (and her characters) apart from the rest of the world. It was also, conveniently, the perfect excuse to "escape from the exigencies of familial or social duty," which Victorian women were expected to make their main occupation. "It is only by falling ill," Dillon asserts, "that she can find for herself the right kind of solitude, in which to invent her future self."

Florence Nightingale, who had thrived nursing wounded soldiers in conditions of stupendous filth and squalor during the Crimean War, perfected this strategy. She practiced what Dillon calls a "studied enfeeblement" once she returned in England, pleading ill health and holing up in her bedroom, where she set about tirelessly working to reform the medical care of British servicemen. She was perpetually trembling on the threshold of death, which lent great urgency to all her projects and permitted her to browbeat her allies -- some of whom actually were sick, and got little sympathy from Nightingale. As Dillon puts it, she "retreated from the world the better to engage and control it."

Those who idolize Darwin as one of reason's champions may be dismayed to learn that he ardently embraced all kinds of quack treatments for whatever it was that was always wrong with him. He took multiple "water cures," which entailed cold baths and being wrapped in and rubbed with cold wet sheets. He also kept meticulous records of his own flatulence -- intestinal gas being a persistent fixation for hypochondriacs through the ages. The whole Darwin family seems to have taken up hypochondria as a form of intimacy; it offered them a justification to fuss fondly over themselves and each other.

Above all, the mysterious illnesses afflicting Darwin and the other figures portrayed in "The Hypochondriacs" provided an excellent excuse to avoid doing what they didn't want to do. If they were famous, like Nightingale, Gould and Darwin, they could beg off the public appearances and meetings they disliked or considered a waste of time. And if they were relatively unknown, like Alice James (sister to Henry and William), being sick shielded them from the unendurable demands of an ordinary life.

Ironically, imagined illnesses had and have a tendency to lead to real ones. The cures imposed in past centuries -- especially the common prescription of bed rest -- usually made people feel worse, while the diet that probably produced the constipation, gas and minor ailments that plagued so many of them went uncorrected. But even when a hypochondriac has access to first-rate medical advice and care, he will often ignore it, as the stories of Gould and Warhol demonstrate. Both wound up with straightforward, unambiguously diagnosed conditions -- high blood pressure and an infected gall bladder, respectively -- but refused to comply with the treatments recommended by their physicians and effectively killed themselves as a result. Gould self-medicated with a cornucopia of prescription drugs and Warhol visited a "crystal healer" instead of submitting to relatively routine surgery.

Do these nine cases hang together, forming an enlightening, three-dimensional model of hypochondriacal thinking? Not really. Hypochondria -- morbid sensitivity, overactive imagination, phobia, antisociality, obsessive-compulsion, passive-aggression, depression -- is so slippery and mutable it's hard to sum up, and while Dillon clearly feels obliged to theorize about its meaning, the passages where he does so are the book's only uninteresting moments. What makes "The Hypochondriacs" fascinating is the ever-shifting spectacle it offers of human folly and ingenuity, and the revelation that it can be so hard to tell the two apart.

Biography Books Mental Illness Our Picks What To Read