Comedian/author Julie Klausner on her new book, twee musicians and what the Muppets taught her about love 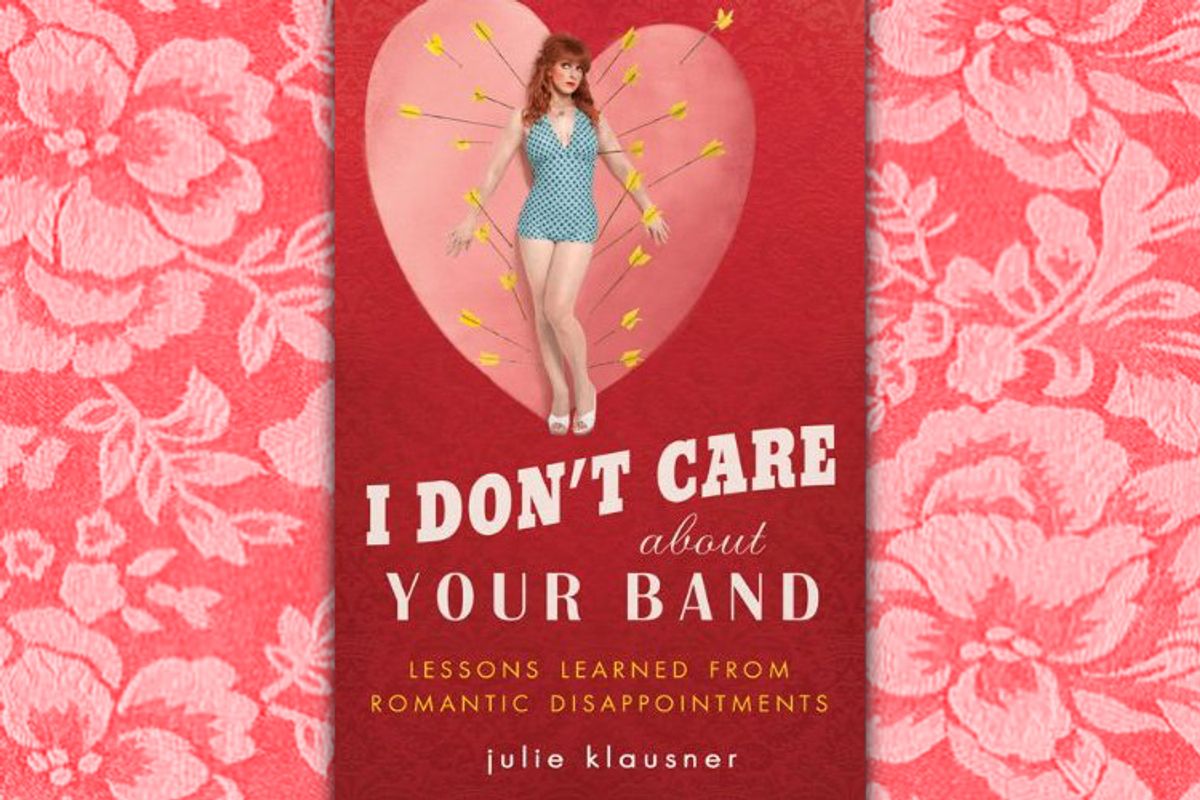 There are a couple of things you should know about Julie Klausner. The first is that she's a hilarious comedian, a veteran of the Upright Citizens Brigade Theater who has written for "Best Week Ever" and "Saturday Night Live." The other is that she's been on a lot of bad dates. Her memoir, "I Don't Care About Your Band: What I Learned From Indie Rockers, Trust Funders, Pornographers, Felons, Faux-Sensitive Hipsters, and Other Guys I've Dated,"  is a series of vignettes about relationship that make Carrie Bradshaw's columns look like simpering fairy tales. There are emotionally stunted MySpace correspondents, Hüsker Dü-T-shirt-wearing vegan narcissists, and a guy who talks about his kidnapping charge on a first date.

Broadsheet e-mailed Julie to talk about Miss Piggy as feminist role model, "Katie Roiphe'ing out," and how she survived her 20s.

You have a tongue-in-cheek story about the damaging lessons the Muppets taught you about love. Can you explain that?

First of all, I want to make sure people know that I am decidedly pro-Muppets. But what I realized recently was that Piggy's relationship with Kermit -- who was hugely appealing and lovable, obviously, but inarguably meek and more soft-spoken than Piggy -- sort of resembled the dating experiences I'd had in my 20s. I'd go out with skinny guys who seemed more interested in their projects and their friends than in anything more serious than hooking up, and they seemed to sort of take it for granted that I would chase and conquer them if I was interested in them romantically. Like, I'd be all "Hi-YA!" and trick them into marrying me, which is, by the way, what Piggy does at the end of "The Muppets Take Manhattan."

I looked up to Piggy as the icon of femininity -- all feather boas and blue eyeshadow and rings over gloves and chocolate bonbons -- and how maybe my infatuation ran parallel to a generation of guys who wanted to be like Kermit, who was always kind of terrified of her. It's just a theory.

Do you think it makes the "frat bully" type look more appealing?

Well, I do think the epidemic of tweeness among young men has probably done wonders for guys who are more traditional about their assholism. You definitely find women now who are eager to date more macho types, because they're desperate for the alternative to the asexuality of someone in a perpetual state of adolescence well into his 30s.

You write about how women "rode on the wings of feminist's entitlement," only to end up at the mercy of the guys who "don't quite seem to know what's expected of them." What do you think caused this sort of widespread haplessness?

At the risk of totally Kate Roiphe'ing out, I do think the feckless nature of a lot of unattached men from my generation does come from their experiences growing up in feminism and post-feminism's shadow. I just think that when feminism came along, there was no male equivalent to the massive amounts of discourse and debate and sexual identity chaos that came in its wake. How do we feel about pornography now? Hooking up? What the fuck actually is "slut shaming"?

Look at the comments section of any Jezebel post -- even the ones that are just photos of Mandy Moore getting coffee. You see young women falling over themselves to get in their 2 cents about what they think is sexist and what isn't. I think that's great. But men never had any parallel experience (those drumming in the woods guys do not count), and now, women my age are contending for men with no generational consensus over whether some of the things their dads did or didn't used to do are still expected of them -- whether it's picking up the check after a date or not being allowed to cry. It's just tough to know what's expected of you, and it's not like men spend their time talking about this stuff the way women do. Women be talkin' on the phone and such!

Your book is really fun to read, but the material seems pretty emotionally painful. What was the writing process like, dredging all that stuff back up?

It was exactly like Diane Keaton at the end of "Something's Gotta Give," when she's crying and typing at the same time. No, some of that stuff was hard to dredge up, but it's not like I emotionally relived any of it in the process; it's storytelling, not psychoanalysis. If anything, writing something out with the intention of entertaining people gives you the distance of being able to figure out what you think about what happened. And you get the chance to make jokes at your own expense, which is always good to do.