'Tis the season for Tagalongs, Thin Mints and the strange mix of deprivation and reward that makes them special 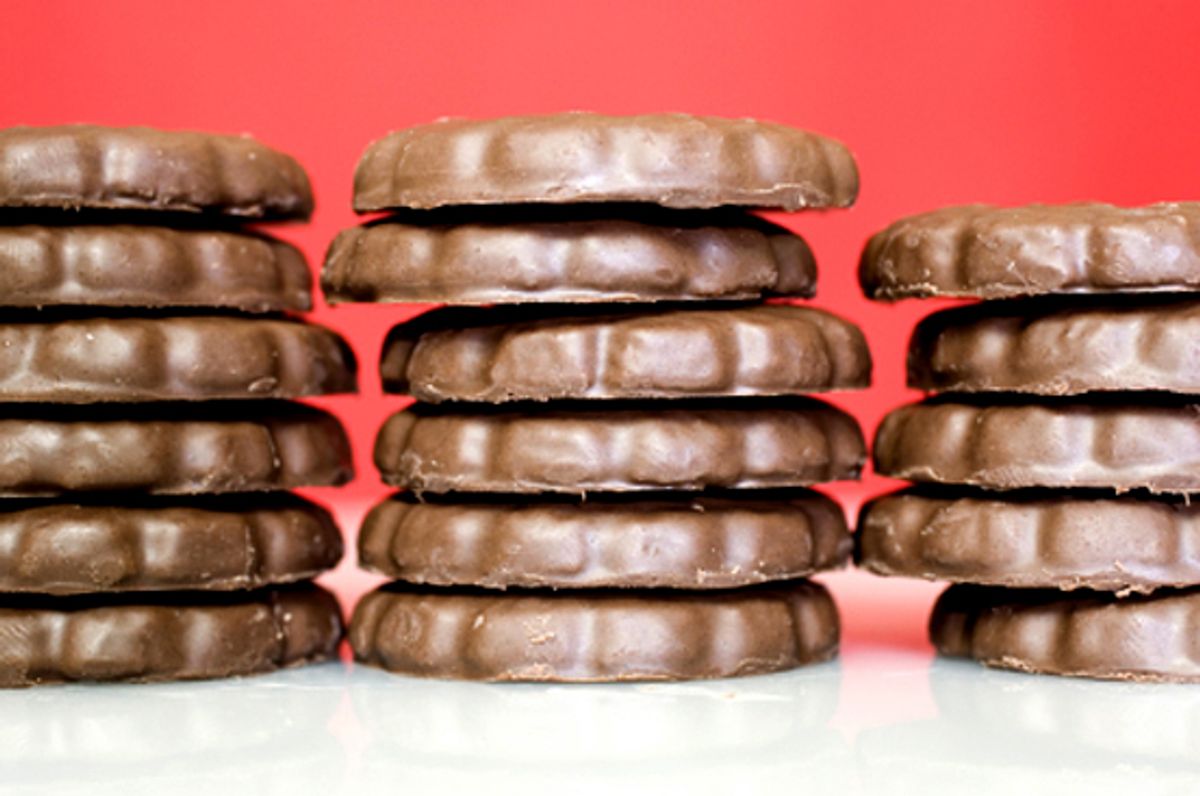 "How do you celebrate the season?" Salon's Francis Lam asks in his latest Kitchen Challenge. He doesn't mean the six more weeks of winter that groundhog Punxsutawney Phil promised us this morning, or Black History Month. He means Girl Scout cookie season, that magical time of year when grown-ups go positively apeshit for packaged baked goods that -- sorry -- really aren't that good.

Don't get me wrong: You can put me down for a couple of boxes. After all, "every cookie has a mission," as the video at GirlScoutCookies.org informs us. The cookies teach girls how to set goals and manage money, they fund worthy projects, they cheer up soldiers in Iraq, they give terrific foot massages. And, you know, they're lumps of fat and sugar, so even if they don't taste that good, they don't taste that bad, either. But I'll tell you how I celebrate the season: By meditating on why people lose their minds over these particular lumps of fat and sugar every single year.

I mean, people aren't just like, "Oh, how nice, the cookies sold by cute children in retro uniforms for a vague good cause are back." They're like, "OMG TAGALONGS SO GOOD WANT THEM IN MY MOUTH RIGHT NOW!" And if you're like, "You know you can get basically the same things at the grocery store any time you want, right?" they're like, "NOT THE SAME, HEATHEN."

Which brings us to the most obvious reason for Girl Scout cookie mania: the illusion of scarcity. If you miss your chance, you will have to wait an entire year to get another shot at the real thing, which we all know is infinitely more satisfying than the numerous facsimiles available in the supermarket year-round, let alone something crazy like homemade cookies fresh from the oven. As Rebecca Traister said in an e-mail, "It is the passion of deprivation and seasonal reward. Like when once a year you ate a ton of zucchini bread because you had 400 zucchini in your garden, or when you were excited in April because there was asparagus, and then in August because there were great tomatoes and peaches. Other examples: Cadbury Creme Eggs, Christmas trees, soft-shell crabs, and when 'The Wizard of Oz' used to air only at Easter, before anyone had VCRs." Technically, you can buy fresh asparagus in January or a Douglas fir in June or a package of Lorna Doones whenever, but it is not the same. (Heathen.) So, kudos to the Girl Scouts of America for nailing the supply and demand thing and demonstrating the importance of a strong brand identity, but that still doesn't fully explain people writing haiku about Thin Mints, you know?

Maybe it's nostalgia. After all, one bite of a Girl Scout cookie takes you back to a time when people wrote elegant letters instead of poorly spelled texts, when popular music didn't sound like so much noise, when "The Wizard of Oz" was only on once a year. Or something. Basically, it's about tradition and ritual and tasty chocolate coating -- what's not to love? Those who grew up on the stock from Little Brownies Bakery still speak the cutesy, perplexing names like incantations: Tagalongs, Do-Si-Dos, Trefoils, Samoas. Here in the plainspoken, practical midwest -- and everywhere else served by ABC Bakers -- we call those Peanut Butter Patties, Peanut Butter Sandwiches, Shortbread, and Caramel deLites, respectively, so it's possible I missed out on a crucial part of the mystique. It's also possible I'm still bitter about my parents refusing to help me sell cookies in 1985 because they were from the last generation that actually believed the point was nurturing a girl's entrepreneurial spirit, not gauging how many of my dad's employees were afraid of getting on his bad side. (I did not win the 10-speed.) But, as a semi-professional observer of Americans' fucked-up relationship with food (and full-time volunteer killjoy), I still see something a bit insidious in the unbridled lust for Girl Scout Cookies, especially as it's expressed -- performed? -- by women.

Allow me to harsh your nostalgic buzz and/or sugar high by pointing you to the official Girl Scout Cookies FAQ, which includes the following questions:

Now, please consider this four-page article on "surviving Girl Scout cookie season" -- god help those who fail to take the proper precautions! -- in which a registered dietitian attempts to determine "which are the most healthy -- or perhaps I should say the least unhealthy" and offers tips for tricking your palate into believing you've already had a satisfying eating experience before you go to town on a whole sleeve. Four pages on how to eat cookies, people. But then, some people not normally prone to bingeing seem to need it at this time of year. Popular weight loss blogger Veronica Noone, who's made a career out of being among the tiny percentage of people who have lost a substantial amount of weight and kept it off for years, wrote in 2007, "I am sitting here with that gross overstuffed feeling. Why? Why? Why am I doing this to myself? I've been totally out of control on the eating front since Thursday." Finally, the mysterious force behind her uncharacteristic lack of discipline is revealed: "Whoever told me to throw away the Girl Scout cookies was TOTALLY right."

Here's my theory: In a culture obsessed with thinness, "healthy" eating and the appearance of Puritanical self-control, Girl Scout cookies are just about the last non-holiday-related foodstuffs that we are all permitted -- nay, expected -- to eat with abandon. Obviously, as the above paragraph illustrates, this causes anxiety for some folks. But for the average body image-troubled Jane -- the kind who feels guilty ordering anything except salad with dressing on the side, the kind who begs a friend to split dessert so at least she's got a co-conspirator, the kind who is incapable of consuming an entire sandwich without reflexively announcing her afternoon workout plans to anyone nearby -- Girl Scout Cookie season is all about one glorious, exquisitely rare occurrence: Permission to eat cookies, and openly enjoy it. After all, they're Girl Scout cookies! They are so good, you guys! Everyone agrees! So when one opines that, as Traister put it, "if people had Girl Scout Cookies all year round, they would say 'These cookies are in fact inferior to almost every other kind of cookie you can get,'" one threatens a very precious belief: That these cookies really are worth all the fuss, so -- unlike all manner of lesser sweet, rich comestibles -- it's actually OK to love eating them.

I believe it is OK to love eating them. But I also believe it's OK to love eating far superior cookies you can make or buy on a whim any time, and perfect August peaches and tender local asparagus and salt and fried chicken and scrambled eggs. Because I believe it's OK to love eating, period. Because food isn't poison, and what goes in your mouth says exactly nothing about your moral fiber. Also, because lots of things taste really good. Of course, here is where I feel compelled to insert the requisite "I'm a reasonable person and not just the weak-willed straw fatass you're imagining" disclaimer about balance and variety and whatnot -- but with that out of the way, can we reflect for a moment on the "passion of deprivation" underlying the fetishization of Girl Scout cookies, and whether it's really only about their relative scarcity? For my money, it's also about the scarcity of opportunities for people in this culture, especially women, to admit openly that the desire for tasty food -- like for sex and sleep -- is a normal human drive, not a humiliating weakness that must be stamped out. Like other people look forward to Girl Scout cookie season, I look forward to a time when our culture is so free of food-based shame that many more of us can look at a box of Tagalongs and, instead of immediately polishing off a sleeve in slightly guilty ecstasy, think, "They're just cookies, for pete's sake. And they're not even that good."