2010 gets in full swing: Primary day in Illinois

The midterm cycle kicks off as voters in the Land of Blagojevich nominate candidates for governor, Senate, Congress 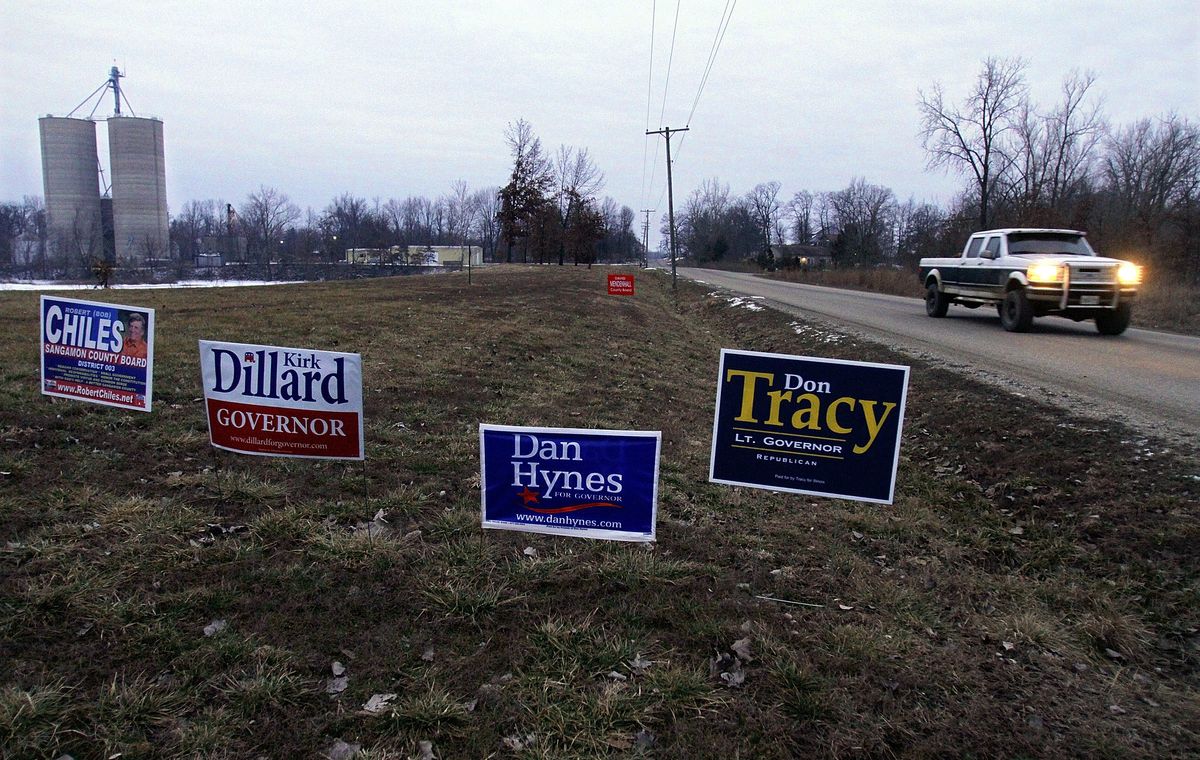 The 2010 elections really kick off today as Illinois voters go to the polls for a bunch of primaries. Here, a quick rundown of what to keep an eye on in President Obama’s home state. You'll note that much of what's going on looks like politicians swimming in the flotsam left behind by former Gov. Rod Blagojevich.

With appointed incumbent Sen. Roland Burris, D-Bizarroworld, retiring, Democrats have a three-way primary for the prize. State Treasurer Alexi Giannoulias remains the frontrunner going into the vote, but his margin has narrowed significantly. Although he’s just 33, a friend of Obama, and the only elected official in the race, Giannoulias faces questions about possible shady doings at a bank run by his family.

Doing much of that questioning is formidable opponent David Hoffman. A former federal prosecutor and Chicago inspector general, Hoffman has based his campaign on his corruption-busting appeal. Also running hard at Giannoulias is Chicago Urban League President Cheryle Jackson, who last week actually urged the frontrunner to drop out of the race. More or less accusing Giannoulias of being a loan shark, Jackson argued that his family’s bank’s issues made him unelectable: "For the sake of Illinois families and for the good of the Democratic Party, I am calling on the treasurer to do the honorable thing and withdraw from this race today," she said.

Jackson may be right in the long term, but for the moment, Giannoulias looks likely to pull off a modest win in the primary, and at least seems to have a reasonable shot against likely Republican nominee Rep. Mark Kirk, a moderate from the North Shore suburbs. He’s the GOP’s strongest possible candidate in a good year for them -- but this is still Illinois, after all.

Here too, most of the interesting action is on the Democratic side. Incumbent Gov. Pat Quinn, who took over when Rod Blagojevich was impeached, faces a stiff challenge from state Comptroller Dan Hynes. In high Illinois style, the contest has become bitter and vaguely appalling. Hynes has been airing an ad that shows the beloved late Harold Washington, Chicago’s first black mayor, explaining why he fired then-aide Quinn. In turn, Quinn has accused Hynes of race-baiting, and attacked his father for double-dipping in public pensions. A scandal relating to cemetery management, which falls under Hynes’ supervision, has also featured in the escalating acrimony. The race now looks like a toss-up.

On the Republican side, there’s a fragmented field of candidates, featuring multiple vaguely familiar names, none of whom seem able to clear 20 percent in polling. The leading candidates are former state Attorney General Jim Ryan, state Republican Party chair and frequent candidate Andy McKenna and state Sen. Kirk Dillard. There’s also a Tea Party favorite in the race, Adam Andrzejewski, who’s even scored the endorsement of legendary Polish president and activist Lech Walesa -- no small thing in Illinois. Still, he’s unlikely to leap to the head of the pack overnight.

Republicans are theoretically able to win gubernatorial elections in Democratic-leaning Illinois (Blagojevich's predecessor was a Republican), but it’s not clear that any of the three of these guys -- and the primary is a toss-up between them -- is the one to do it.

In the 14th congressional district, west of Chicago, Democratic Rep. Bill Foster holds the seat vacated by former Republican House Speaker Dennis Hastert. Two candidates have lined up against Foster: state Sen. Randy Hultgren, and Hastert’s 31-year-old son, Ethan. Although the party establishment favored a smooth dynastic handoff, local conservative activists haven’t reacted too favorably to the idea, and have rallied to Hultgren in a year of high energy in the party base. The two candidates actually share almost all the same positions on issues, but voting for Hultgren would be a kind of identity politics for conservatives of the 14th district, and isn’t at all unlikely.